A Review of Evapotranspiration Measurement Models, Techniques and Methods for Open and Closed Agricultural Field Applications
Previous Article in Journal

Evapotranspiration represents a significant part on the water balance and, thus, the correct evaluation of this hydrological parcel is relevant when modeling a watershed. The objective of this work is to evaluate the Soil and Water Assessment Tool (SWAT) model’s capability in adequately simulating evapotranspiration in a watershed with predominance of the Brazilian Cerrado biome. Hydrological modeling of the Gama watershed located in the Federal District, which has 57.5% of its total area covered by pristine Cerrado, was conducted. Hydrometeorological and turbulent flow variables have been monitored in weather station and Eddy Covariance (EC) tower, respectively. SWAT simulations were performed for potential evapotranspiration methods: Hargreaves (H), Priestley–Taylor (PT) and Penman–Monteith (PM). Modified versions of SWAT for estimating actual (ET) by Strauch and Volk (2013) (SV) and Arroio Junior (2016) (AR) were also tested. The calibration and verification of the SWAT model, in terms of daily flow, were carried out using a Particle Swarm Optimization algorithm, and fair results were obtained with all the methods evaluated. The actual evapotranspiration (ET) simulated with SWAT (ETsim) using the PM, PT, H, SV and AR methods for a Cerrado hydrological response unit (HRU) were evaluated and compared with the ET obtained using the turbulent flow (Eddy Covariance) method (ETobs). Comparing ETobs and ETsim results, the PM method showed the best fitness and the H and PT methods showed better fit for the dry and the rainy periods, respectively. Although representing an advance on ET modeling, the SV and AR modifications did not improve the response in terms of simulation of the studied area. View Full-Text
Keywords: evapotranspiration; SWAT; Eddy Covariance evapotranspiration; SWAT; Eddy Covariance
►▼ Show Figures 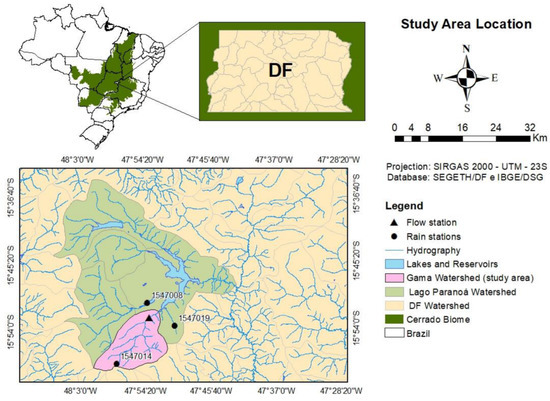