New Mexico (NM) has been identified as the state in the US that will be most adversely impacted by climate change and associated water stress. Roughly 92% of NM is rangeland, most of which is grazed by beef cattle. We calculated the blue (surface and ground) and green (precipitation) water footprints (WF) of NM beef cattle industry (cow-calf, backgrounding, and feedlot). This analysis indicated that the weighted average WF of NM beef cattle was 28,203 L/kgmeat. The majority of the WF was accounted for green water (82%; 23,063 L/kgmeat) used by rangeland forages. Blue water accounted for only 18% (5140 L/kgmeat) of the total beef WF estimate. The relative contribution of green vs. blue water varied significantly among the different phases of beef production. In cow-calf, green water accounted for 99.5% of the WF whereas blue water, accounted for 100% of beef WF during backgrounding and feedlot. Based on our estimate, NM cow-calf operations is about a third or a quarter of the blue water (m3/year) used to produce corn or wheat, and only 5% or less of the water used to produce cotton or hay. In NM, irrigation accounts for about 84% of freshwater use followed by public/domestic use of 10%. Mining, thermo-electric, livestock production, aquaculture, and industrial uses collectively account for the other 6%. View Full-Text
Keywords: blue water; green water; drought; forage crops; climate change; New Mexico blue water; green water; drought; forage crops; climate change; New Mexico
►▼ Show Figures 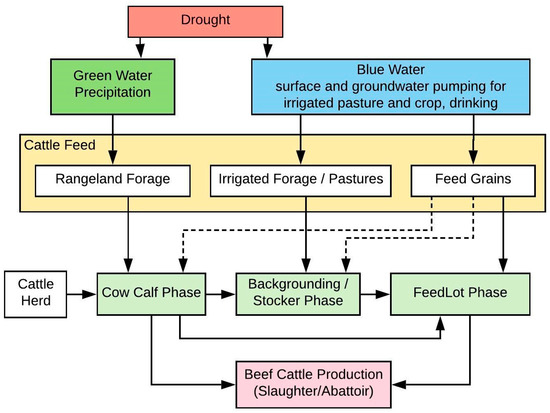