Meteorological Drought Events and Their Evolution from 1960 to 2015 Using the Daily SWAP Index in Chongqing, China
Previous Article in Journal

A Conflict between Traditional Flood Measures and Maintaining River Ecosystems? A Case Study Based upon the River Lærdal, Norway

Infertility is a worldwide health issue, but mechanisms of both male and female reproductive toxicity remain to be elucidated. So far, a limited focus has been on potentially harmful environmental factors such as arsenic, which is naturally occurring in groundwater. The objective of this review was to systematically investigate the association between arsenic in drinking water and adverse reproductive outcomes in men and women of fertile age. We conducted a systematic literature search and included case-control studies and cohort studies reporting on decreased semen quality characteristics, increased time to pregnancy, infertility, or spontaneous abortion. In total, 433 articles were screened and ultimately, eight studies were included. Included literature was quality assessed with the Newcastle-Ottawa Scale. Findings were reported in a narrative synthesis. Only one study investigated male fertility. An association between increasing arsenic exposure and decreasing semen quality characteristics was found, as well as an indication of arsenic accumulation in seminal plasma. These findings are, however, at high arsenic levels (>1000 µg/L). No consistent evidence was found to support the hypothesis that arsenic exposure from drinking water is a cause of longer waiting time to pregnancy or spontaneous abortion, being the only endpoints investigated in the included literature. In conclusion; the evidence is sparse and of varying quality, however, it does warrant attention, as it conflicts with existing evidence, mainly from cross-sectional or ecologic studies. View Full-Text
Keywords: arsenic; drinking water; infertility; reproductive outcome; semen quality; spontaneous abortion arsenic; drinking water; infertility; reproductive outcome; semen quality; spontaneous abortion
►▼ Show Figures 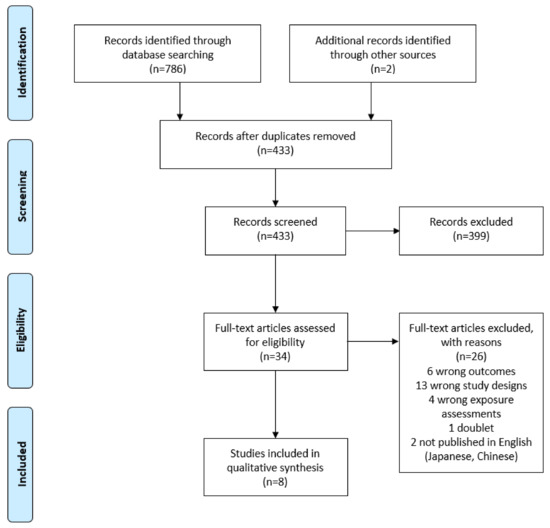