The Tianshan Mountains, known as the “water tower” of Central Asia, are the major source of water for the most part of Xinjiang and oasis region of Central Asia. However, climate warming has amplified the discharges of glacial meltwater in the Tianshan Mountains. In this study, we calculated river discharge by integrating cross-sections mapped using unmanned aerial vehicles (UAV) and water velocity data collected in the field. Multiple remote sensing images, such as Landsat and Sentinel-2 imagery, were applied to estimate the long-term discharge of 19 river sections in ungauged regions of the Tianshan Mountains. River discharge variations under climate change were also examined. Using our in-situ measured discharges as reference, the UAV derived discharge results have an NSE (Nash–Sutcliffe efficiency) of 0.98, an RMSE (root mean square error) of 8.49 m3/s, and an average qualification rate of 80%. The monthly discharge of glacial meltwater-dominated river sections showed an average decrease of 2.46% during 1989–2019. The shrinking and even disappearance of mountain glaciers (approximately −4.98 km2/year) was the main reasons for the decrease trend. However, the precipitation-dominated river sections showed an average increase of 2.27% for the same period. The increase in precipitation (approximately 1.93 mm/year) was the key cause for the increase tendency. This study highlights remote sensing hydrological station technology and its application in the long-term prediction of river discharge, which is critical for decision-making regarding integrated water resource management in alpine regions. View Full-Text
Keywords: climate change; discharge; remote sensing hydrological station; river section; trend climate change; discharge; remote sensing hydrological station; river section; trend
►▼ Show Figures 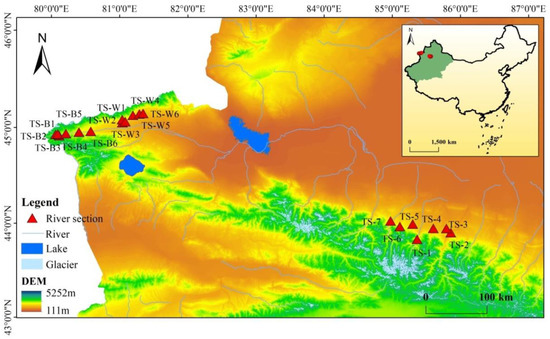