The Terraces of the Anti-Atlas: From Abandonment to the Risk of Degradation of a Landscape Heritage

In the last few years, terraced landscapes have been receiving renovated interest all over the world (e.g., dry-stone walls named UNESCO heritage in November 2018). Terracing was recognized as a fundamental component of agricultural systems, both for its cultural value as well as for its importance in guaranteeing food production in unfavorable environments.
Such landscapes are among the most evident fingerprints of humankind on terrestrial ecosystems [1], aiming at generating new surfaces available for cultivation in sloping areas, reducing runoff and soil erosion, harvesting and storing rainwater, accumulating biomass by increasing crop production, and restoring ecosystems themselves [2].
The scientific community has been investigating the environmental effects related to terracing for many decades, and, within this framework, hydrological and hydrogeological processes occurring in terraced landscapes. Latest studies showed that terracing represents a radical alteration of pre-existing terrain morphology, thus altering water infiltration and runoff generation processes, and ultimately influencing the entire water cycle from the single terrace up to the slope, catchment, and landscape scales [3,4].
Sound terracing implementation and terraced landscape restoration can contribute to reduce hydrological and hydrogeological hazards, as well as soil erosion and land sliding [5]. On the one hand, this latter effect can be relevant both at the local scale, reducing hazards to agricultural areas, and at the catchment scale, reducing hazards to population and infrastructures located downstream. On the other hand, deteriorated terraced systems, as well as poorly managed or designed terraces, may increase these hazards, and even enhance the triggering of degradation phenomena [6,7].
Recent developments in scientific and technological research techniques have offered the possibility of increasing knowledge of the terracing–hydrogeological hazard nexus, including, for instance, advanced and detailed geomorphological analysis [8,9], and hydraulic, geotechnical, and hydrological modeling [4,10,11,12].
Given these premises, the aim of the present Special Issue was to gather studies dealing with hydrological–geological risk mitigation given by terraced landscapes, with the potential hazards induced by degraded and/or abandoned terracing, and with effective terrace management strategies. The submission of works showcasing innovative methodologies for the analysis of terraced landscapes and papers on newly implemented terraced systems was encouraged, with a preferred focus on African, South East-Asian, and Latin American countries.

2. Overview of the Special Issues

The paper by Pijl et al. [13] presents an innovative analysis of sustainable drainage systems design in a terraced landscape in Valcamonica valley (Italy). These authors considered a high-resolution 3D digital elevation model obtained by an unmanned aerial vehicle (UAV) through photogrammetry. The current terrace system, which was degraded after some years of abandonment, was evaluated through the Relative Path Impact Index (RPII) together with three new drainage scenarios, implemented by modifying the elevation model. The methodology allowed a time-efficiency and cost-effectiveness analysis of restoration plans in degraded terraced landscapes.
Mesfin et al. [14] focus their analysis on the effect of drought risk reduction induced by terracing in arid and semiarid areas. The paper studies four newly implemented terraced sites in Ethiopia, highlighting how agricultural terracing can enhance the soil water content in terraced areas. The paper also testifies how terraces implemented with less soil disturbance had better performances related to water retention.
The work by Paliaga et al. [15] takes advantage of a Laser Imaging Detection and Ranging (LIDAR)–based digital elevation model to identify the presence of terraces, including those which have been abandoned, in remote yet internationally famous areas such as the Monte di Portofino Promontory (Italy). They developed a semi-automatic methodology for terrace identification from SAGA-GIS local upslope curvature procedure, testing it in the study area.
Berčič, and Ažman-Momirski [16] developed an innovative parametric design procedure for planning the design of terraced landscapes, with a case study in Slovenia, implemented in the “Grasshopper” plugin in Rhino 3D. The approach proposed was proven to be effective in optimizing the design process of new terraced systems.
The Special Issue also hosted multi-disciplinary research efforts, such as the work by Boselli et al. [17], who studied the dynamics of land abandonment in the terraced landscapes of Anti-Atlas (Morocco) with a system dynamics approach. The analysis highlighted how the abandonment of the terraced agroecosystems in the area is mainly driven by social issues rather than by climatic changes. These results have direct policy implications for land management in the Anti-Atlas, which can be extended to the Southern Mediterranean.
Kurozumi and colleagues [18] presented an innovative investigation about the role of hardpans in rice terraces of the Philippine Cordilleras. Based on field surveys and soil analyses, they showed that the hardpan was not sufficiently developed in areas where organic matter content was high, suggesting organic matter clogging. Such phenomena could hinder the suppression of water infiltration, leading to the collapse of the terrace. Therefore, they suggest checking hardpan consistency before the planting season, since this operation is difficult once the paddy terraces are flooded.
Still within the framework of remote sensing analyses, Cambi et al. [19] proposed a low-cost approach for detecting collapses in terraced landscapes. The approach was based on existing DTMs derived from airborne laser scanner (ALS) data and open source GIS software, and showed how collapses can be related to preferential flow paths, as well as to other parameters.
The paper by Sabir [20] closes the Special Issue, showing how the effects of land abandonment in the terraces of Anti-Atlas (described by Boselli in [17]) lead to a reduction of infiltration in unmanaged terraced landscapes, even after few years. The author suggested immediate action to rehabilitate and restore the socio-ecological systems of terraced areas, to avoid consequent hydrological and hydrogeological hazards.

The present Special Issue allowed the collection of different contributions from many areas of the world (Figure 1), guaranteeing the heterogeneity of case studies, from ancient to newly established terraced systems, from rice to dryland terraces (Figure 2).
Some of the case studies focused on issues related to terrace abandonment (Figure 3) [13,15,17,19,20], which represent an issue at the global scale [1,6,7], while others focused instead on new terrace system implementation [14,16]. Such kinds of research efforts could be considered of particular interest, since, while most of the “historical” terraced landscapes were created a long time ago, they offer the possibility of analyzing the different parts of the terracing implementation, highlighting possible errors, their consequences, but also innovative design methodologies.
Remote sensing emerged as one of the most promising technological advances, joint with the use of morphological indexes [13,15,19]. Such a tendency is not new [21], but recent advancements in remote sensing technologies have allowed a rapid evolution leading to multiple innovative applications [22], including low-cost [19] and quick and effective uses [13].
Some of the papers presented in the Special Issue also highlighted the importance of advanced hydrological analyses at the terraced landscape scale [14,18,20]. Such approaches are not frontier research, but the papers submitted considered different and heterogeneous case studies (Moroccan Anti-Atlas, Ethiopian and Philippine rice terraces), which were understudied under this point of view, and which therefore could be further explored. Finally, as highlighted also by Boselli et al. [17], innovative socio-ecological frameworks should be put in place for the analysis of the evolution of terraced agroecosystems, in order to shed light on the relationship between social dynamics and hydrological and geological hazards, which are definitively intertwined.

Writing—original draft preparation, G.C.; writing—review and editing, G.C., A.E., F.P.; supervision, F.P., G.C. All authors have read and agreed to the published version of the manuscript.

The authors are grateful to Water MDPI for the possibility of developing the Special Issue “Terraced Landscapes and Hydrological-Geological Hazards”. We thank all the scholars who contributed as authors and reviewers to the Issue, including those who had their paper rejected. We are grateful also to Daniele Penna and Paolo Tarolli for the critical reading and for the suggestions for the present Editorial. 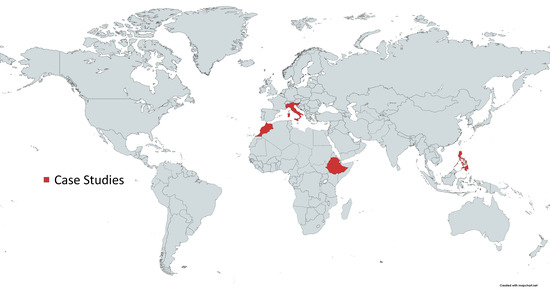 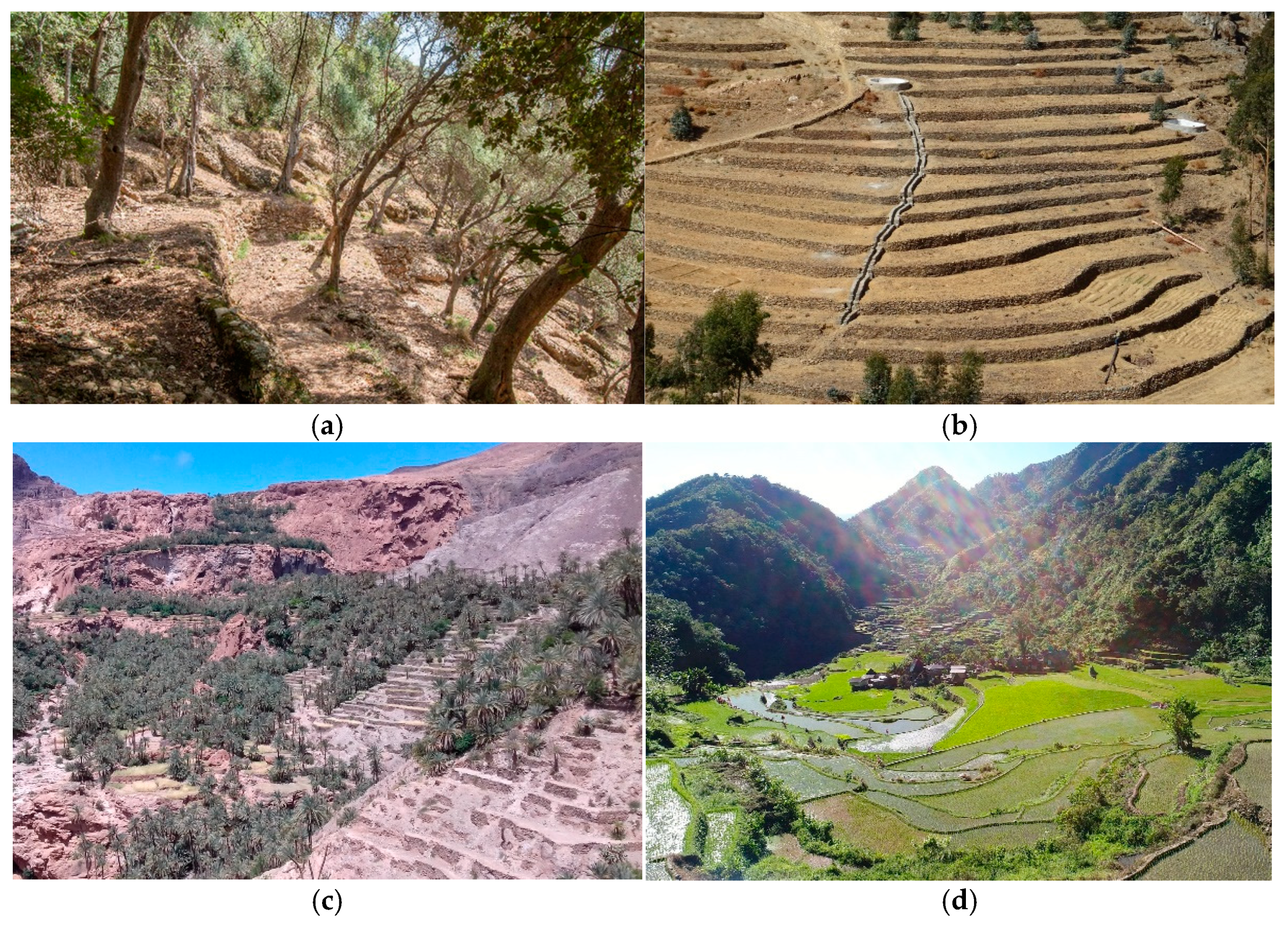 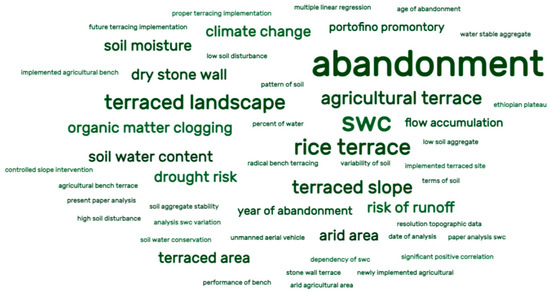