Interactions between Tandem Cylinders in an Open Channel: Impact on Mean and Turbulent Flow Characteristics

The purpose of this study was to explore the effects of different vegetation restoration types on soil hydrology characteristics in the Karst Plateau Gorge and to clarify the soil moisture (θ) use characteristics. A barrel experiment was conducted to monitor θ and the water potential () of three vegetation types (Zanthoxylum bungeanum (ZB), Zea mays L. (ZM), and Sophora tonkinensis (ST), Abandoned land (AL)) was used as a control to explore θ use conditions of each vegetation type. A larger surface permeability led to lower moisture storage. The soil moisture storage showed the law of ZM > ST > AL > ZB. The soil moisture storage also had obvious characteristics in dry-wet seasons. As a typical drought-tolerant crop, ZB responded more obviously to rainfall and had the highest effective replenishment amount and efficiency. Two processes were clearly involved in decreasing soil moisture, which could be divided into three stages of changes: a consumption period (CP), a moisture supplying period (SP), and a relatively stable period (RSP). CP occurred primarily in November to April, when θ was prone to water stress and required proper artificial replenishment. SP was characterized by limited rainfall replenishment in January and May, which significantly increased θ. During the rainy season, corresponding with RSP, θ fluctuated within a relatively stable range. At the end of the CP, the water shortage was more severe. In actual agricultural production, attention should be given to reasonable artificial recharge. This research aims to provide a theoretical basis for karst θ management. View Full-Text
Keywords: Karst; vegetation type; soil moisture; soil water potential Karst; vegetation type; soil moisture; soil water potential
►▼ Show Figures 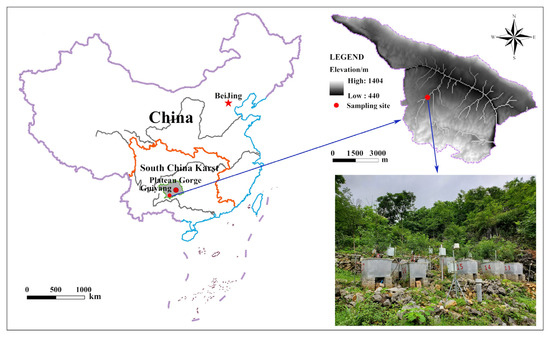