How to Improve the Biological Quality of Urban Streams? Reviewing the Effect of Hydromorphological Alterations and Rehabilitation Measures on Benthic Invertebrates
Previous Article in Journal

Adequate environmental management in tropical aquatic ecosystems is imperative. Given the lack of knowledge about functional diversity and bioassessment programs, management is missing the needed evidence on pollution and its effect on biodiversity and functional ecology. Therefore, we investigated the composition and distribution of the macroinvertebrate community along two rivers. Specifically, 15 locations were sampled in the Coca and Aguarico Rivers (Ecuadorian Amazon) and the macroinvertebrates were used to indicate water quality (WQ), expressed as the Biological Monitoring Working Party Colombia (BMWP-Col) classes. Results indicate that elevation, pH, temperature, width, and water depth played an important role in the taxa and functional feeding groups (FFG) composition. The results show that diversity of taxa and FFG were generally scarce but were more abundant in good quality sites. Collector-gathers (CG) were, in general, dominant and were particularly abundant at low WQ and downstream sites. Scrapers (SC) were the second most abundant group, dominating mostly at good WQ and upstream sites. Predators (PR) were homogeneously distributed among the sites, without clear dominance, and their abundance was slightly higher in sites with medium-low WQ and downstream sites. Lastly, both shredders (SH) and collector-filterers (CF) were almost absent and were more abundant in good quality sites. The findings of this research can be used as baseline information in the studied region since a dam was constructed two years after the sampling campaign, which has been operating since. Furthermore, the results can be used to fill the knowledge gaps related to the bioassessments of other similar systems, particularly for a tropical rainforest. View Full-Text
Keywords: functional feeding groups; limnology; water quality; Amazonia functional feeding groups; limnology; water quality; Amazonia
►▼ Show Figures 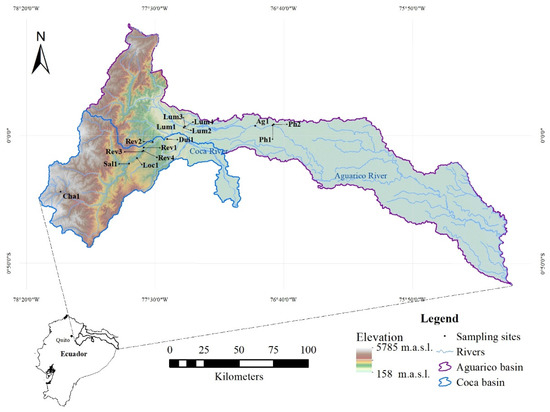