Submerged Speleothems and Sea Level Reconstructions: A Global Overview and New Results from the Mediterranean Sea

2.1. Overview of the Study Area

The Haihe River Basin occupies a total area of 318,000 km2 and is located at 35°–43° N and 112°–120° E. The basin includes Beijing, Tianjin, 91% of Hebei Province, 38% of Shanxi Province, 20% of Shandong Province, and 9.2% of Henan Province, as well as 13,600 km2 of the Inner Mongolia Autonomous Region and 17,700 km2 of Liaoning Province [28]. It is located adjacent to the Bohai Sea in the east, the Taihang Mountains in the west, the Yellow River in the south, and the Mongolian Plateau in the north. The topography of the entire basin is higher in the northwest than in the southeast [29], and it consists of the following seven major river systems: the Luanhe, Beisanhe, Yongding, Daqing, Ziya, Zhangwei, and Tuhaimajiahe river systems [30]. The Haihe River Basin is located in the transitional zone of the arid and humid climates in China, and its annual average temperature ranges from 0 to 14.5 °C. Additionally, the spatial and temporal distribution of precipitation in this basin, with average annual precipitation equal to 535.5 mm, shows obvious zonal, seasonal, and interannual differences [31,32]. Figure 1 shows the specific geographical location of this river basin.

The data used in this study were provided by the National Meteorological Information Center of the China Meteorological Administration and had been obtained from 258 meteorological stations. The data series included daily precipitation and average daily temperature data for the period 1960–2020. Figure 2 shows specific information corresponding to the selected stations for this study. To compensate for some missing site data, interpolation and extension were performed after comparison with data from adjacent sites as well as historical data for several years from corresponding sites.
The annual and seasonal precipitation data at the stations were accumulated based on daily data. February–April, May–July, August–October, and November–December/January corresponded to spring, summer, autumn, and winter, respectively.

The Mann–Kendall test [33,34,35,36,37,38,39] is a widely used nonparametric statistical analysis method. Its characteristic advantage is that the data samples do not need to obey any specific distribution pattern and are not disturbed by a few outliers, and it has a high quantification degree. Furthermore, this test is commonly used to predict long-term trends in hydrometeorological time series data, such as temperature, precipitation, runoff, and water quality [40,41,42].
The Mann–Kendall test assumes that the null hypothesis, H0, is the time series data, (X1, X2, ..., Xn), with n representing the number of independent samples of identically distributed random variables, while the alternative hypothesis, H1, is a bilateral test. For all k values, j ≤ n, and k ≠ j, and the distributions of Xk and Xj are different. The test statistic, S, is defined as: where represents the symbolic function: When , S is approximately normally distributed with a mean of 0 and a variance given by: where is the number of ties and is the number of occurrences in each tie.
Furthermore, the formulas for the determination of the M–K statistic, Z, under the conditions, S > 0, S = 0, and S < 0, are:
Thus, the Mann–Kendall test was used for sequence mutation analysis, and the order column was constructed as follows: where
Additionally, the formula for the calculation of statistical variables was given by: where and , which are defined according to Equations (2)–(8), are the mean and variance of , respectively.
According to the time series data, Xn, Xn-1, ..., X1 is arranged in reverse order, and as described above:
By analyzing the statistical sequences of the UF and UB curves, the change trend of sequence X could be further analyzed; thus, the mutation time and mutation area could be identified [43]. Under the premise of a significance level, α = 0.05 (the critical value being ± 1.96), there are four possible results, i.e., significant increase, significant decrease, no significant increase, and no significant decrease.

By analyzing and calculating the p-values corresponding to each station, it was possible to clearly determine the level of correlation between precipitation and temperature at both interannual and interseasonal scales. After determination, the correlation coefficients were subjected to grade analysis; the results obtained are shown in Table 3.

3.3.1. Analysis of the Correlation between Annual Mean Temperature and Annual Precipitation

3.3.2. Analysis of the Correlation between Mean Temperature and Precipitation for Different Seasons

This research was funded by the National Water Pollution Control and Management Science and Technology Major Project of China, grant number 2014ZX07203-008.

All data used during the study are proprietary or confidential and may only be provided with restrictions.

The authors are also thankful for support from the Hebei University of Engineering, and Editage (www.editage.cn) for English language editing. 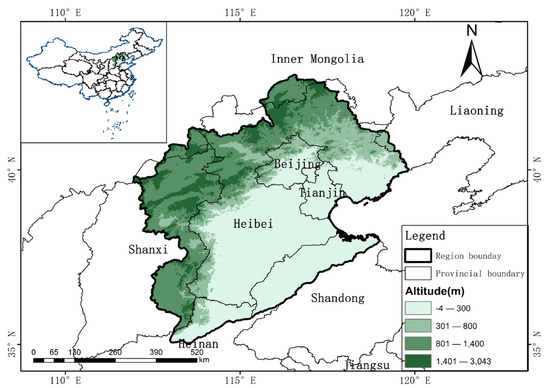 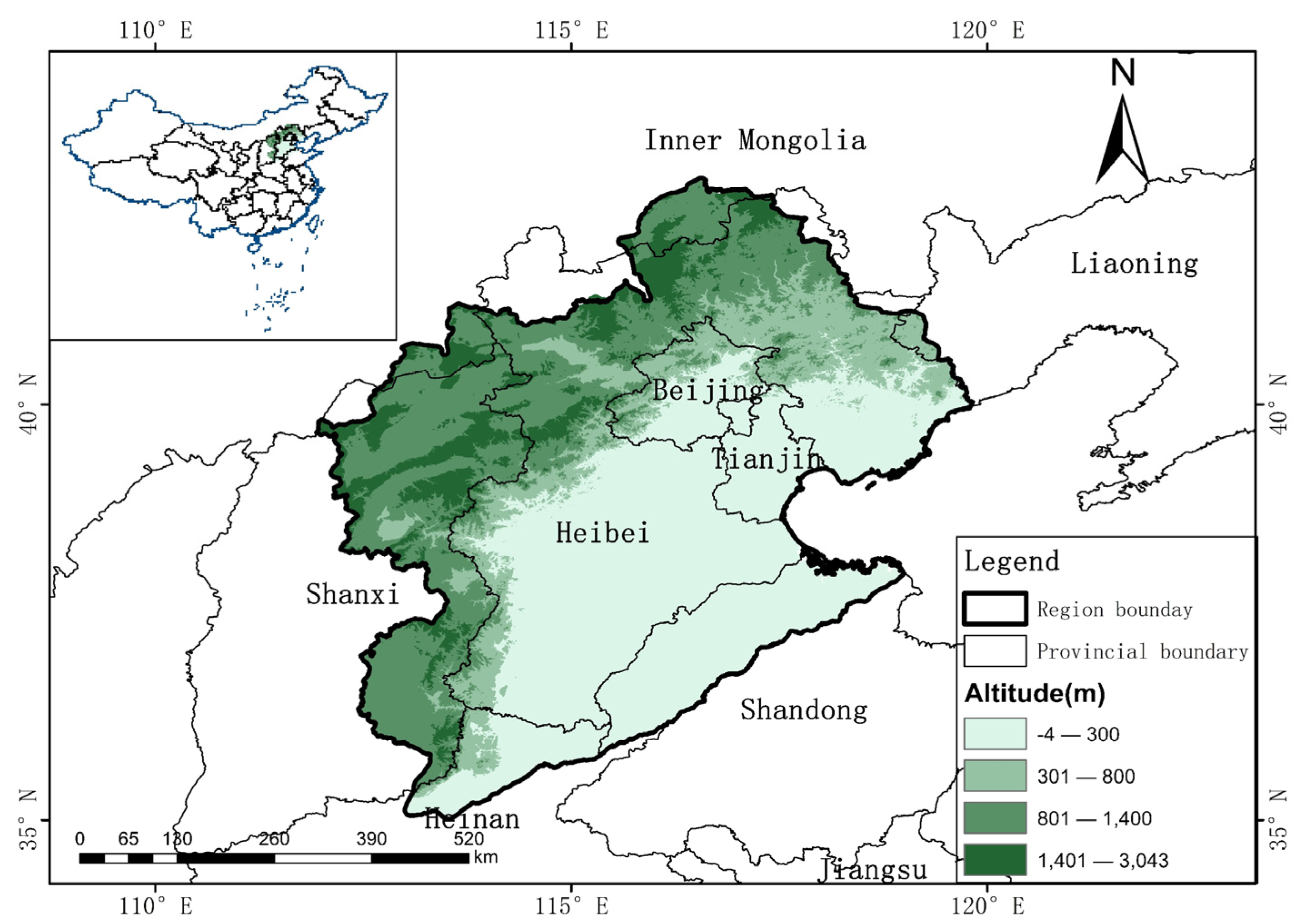 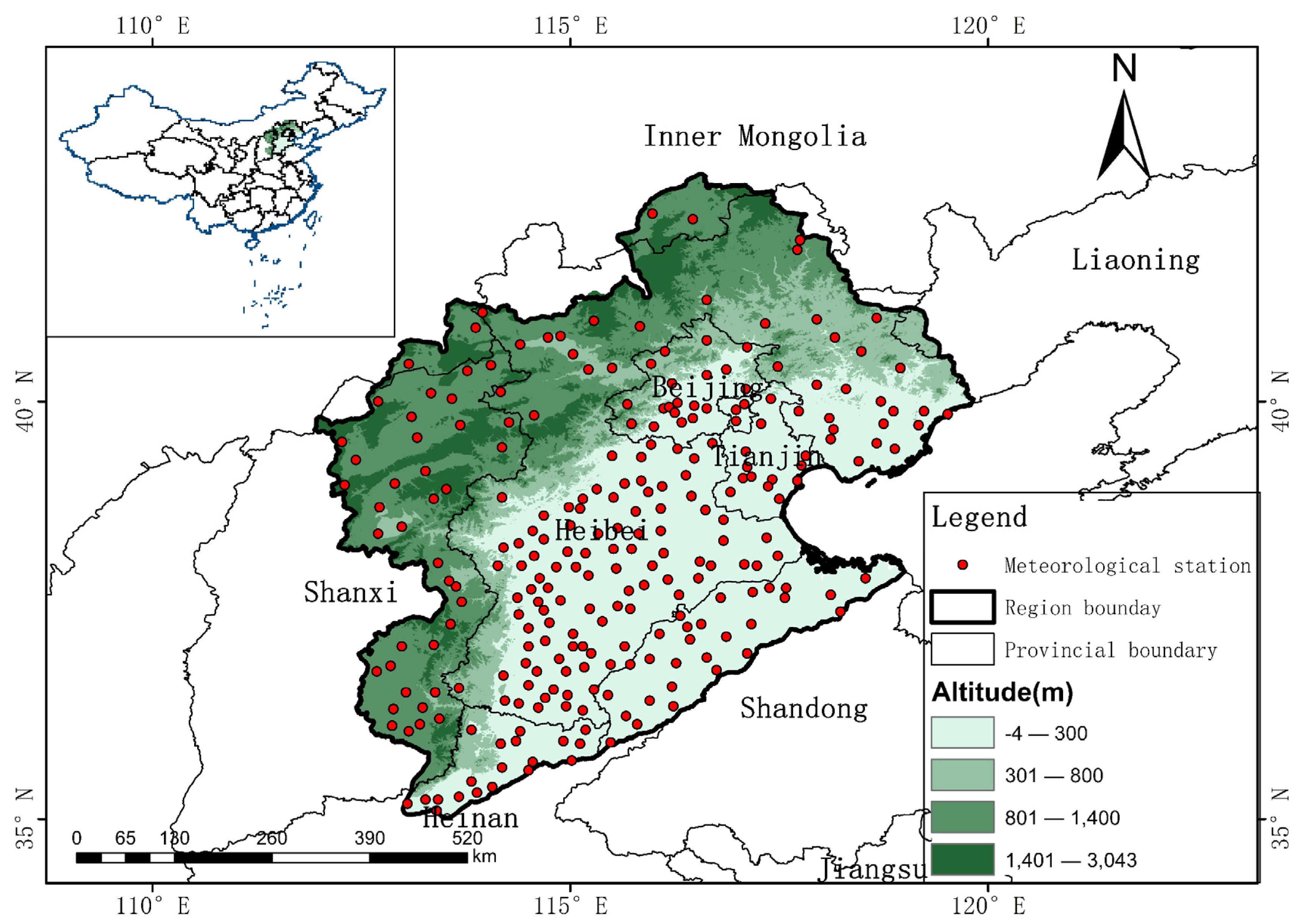 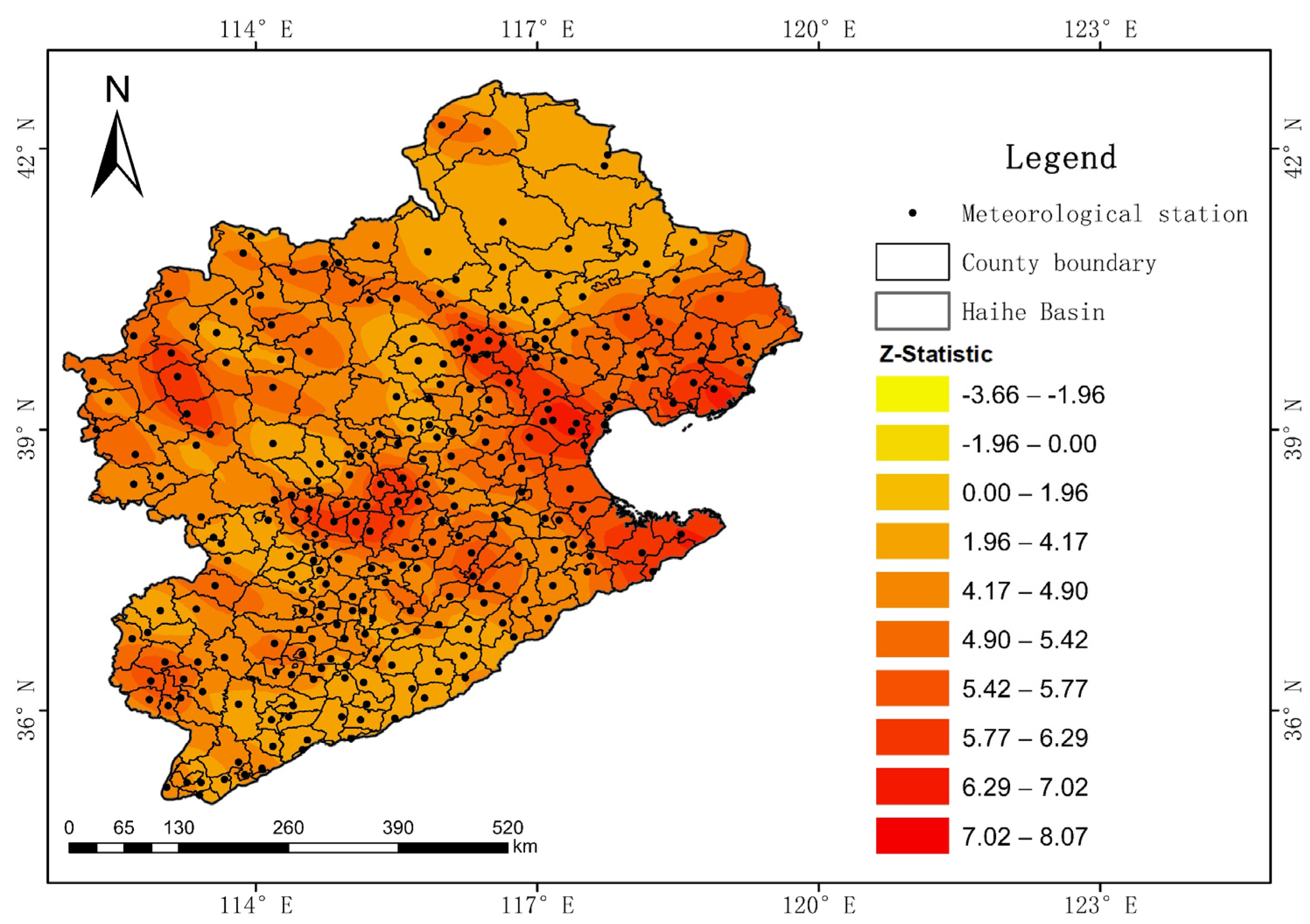 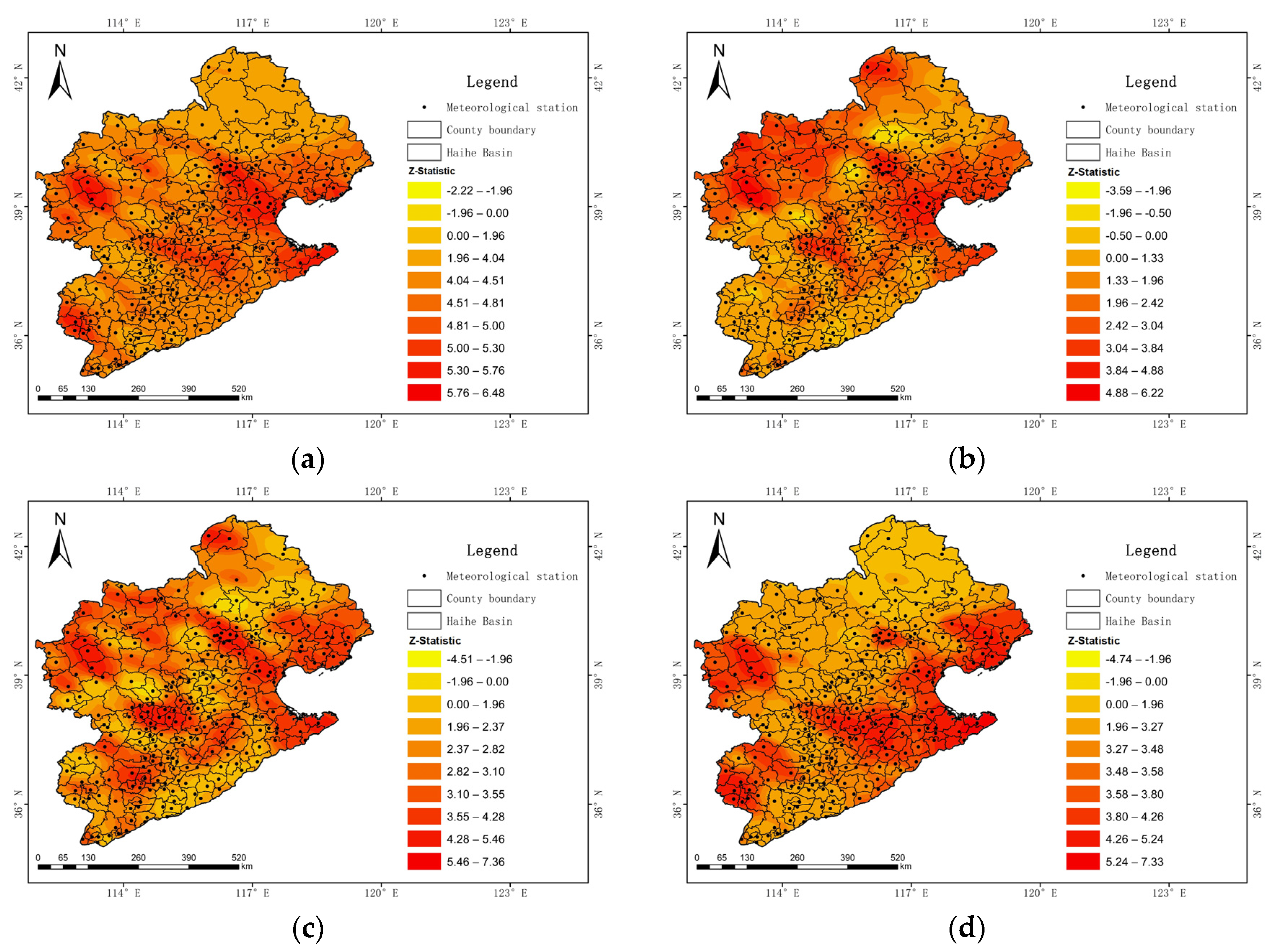 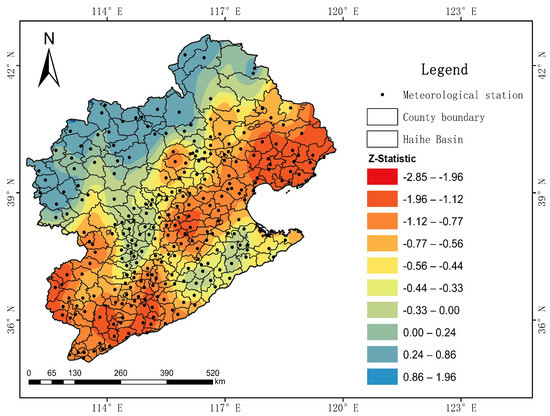 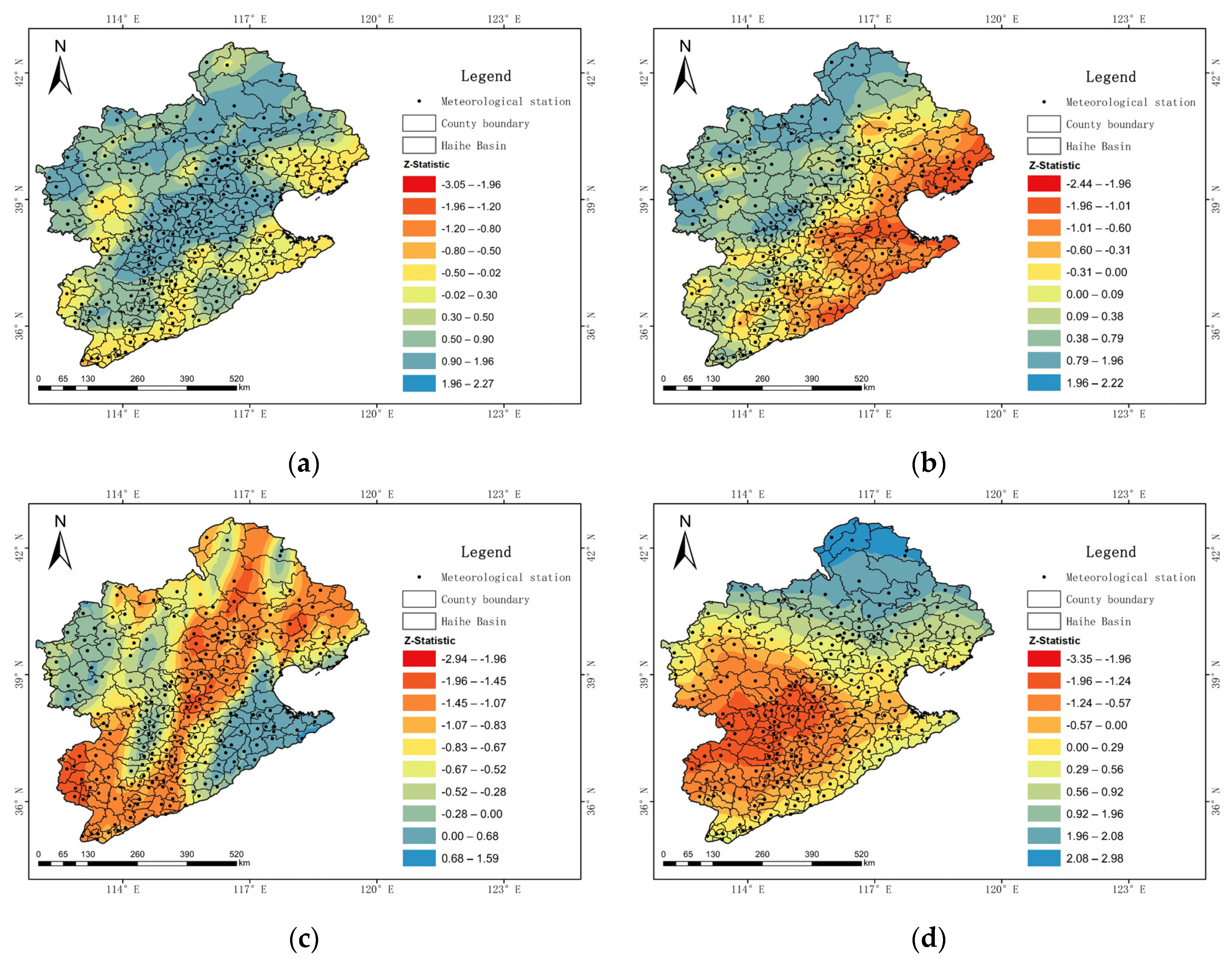 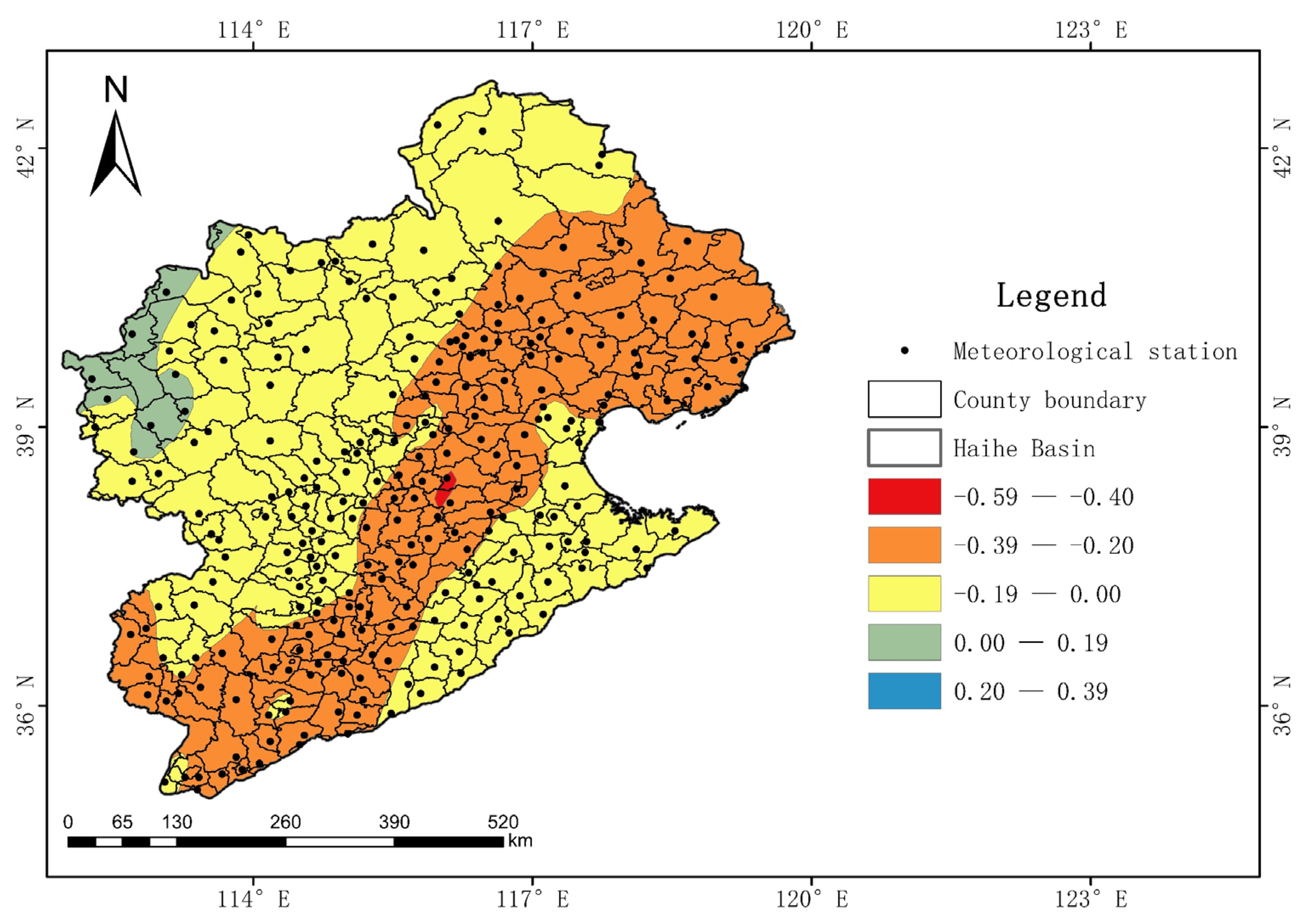