Coupled Effects of Stress, Moisture Content and Gas Pressure on the Permeability Evolution of Coal Samples: A Case Study of the Coking Coal Resourced from Tunlan Coalmine
Previous Article in Journal

Not All Rivers Are Created Equal: The Importance of Spring-Fed Rivers under a Changing Climate

In December of 2019, a total of 114 river water samples were collected from 38 sampling sites in the Xiujiang River of the Poyang Lake Basin for three consecutive days. The temperature (T), pH, dissolved oxygen (DO), chemical oxygen demand (CODCr), five-day biochemical oxygen demand (BOD5), total nitrogen (TN), ammonia nitrogen (NH4+-N), total phosphorus (TP), and concentrations of heavy metals (Cr, Cu, Zn and As) of the samples were measured. The results showed that the average concentrations of heavy metals in the mainstream of the Xiujiang River were Cu > Zn > Cr > As, and those in the main tributary of Xiujiang River (named as the Liaohe tributary) were Zn > Cu > Cr > As, which met the class III of the Environmental Quality Standards for Surface Water in China. However, it was founded that TN and NH4+-N in some agricultural areas had not met the class III standard of surface water. Hierarchical clustering analysis grouped sampling sites into four clusters. Clusters 1, cluster 2, cluster 3, and cluster 4 corresponded to an urban industrial area, rural mountainous area, primitive mountainous area, and agricultural area, respectively. The majority of the sampling sites were classified as mountainous rural areas less impacted by human activities, while the Liaohe tributary were urban industrial areas impacted more by human activities. Principal component analysis and correlation analysis results showed that variation of heavy metals and nutrient elements in Xiujiang River is related to the heterogeneity of human activities, which is mainly affected by urban industrial and agricultural pollution, and natural environments of the river with different background values. The results obtained in the current study will potentially provide a scientific basis for the protection and management of freshwater resources and aquatic ecosystems in the Xiujiang River and Poyang Lake Basin. View Full-Text
Keywords: Poyang Lake Basin; Xiujiang River; nutrient element; heavy metal; source analysis Poyang Lake Basin; Xiujiang River; nutrient element; heavy metal; source analysis
►▼ Show Figures 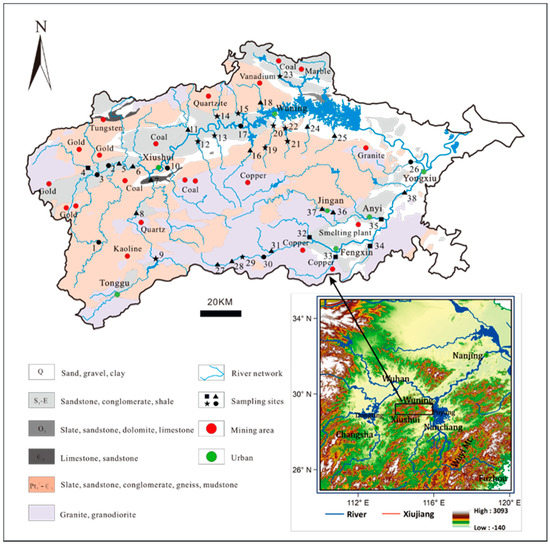