Coupled Effects of Stress, Moisture Content and Gas Pressure on the Permeability Evolution of Coal Samples: A Case Study of the Coking Coal Resourced from Tunlan Coalmine

CH4 gas mainly migrates by diffusion in the coal matrix, while it migrates by seepage in the pores and fractures of coal. The speed of gas migration by seepage is much greater than that by diffusion. Generally, gas flow in coal pores and fractures obeys Darcy’s law, and the permeability model can be expressed as: where K is the permeability of gas, 10−3 μm2; P0 is the standard atmospheric pressure, 105 Pa; Q is flow flux, cm3/s; μ is the dynamic viscosity of CH4 gas, which is determined as 1.08 × 10−5 Pa·s at room temperature; P1 and P2 are inlet and outlet gas pressures, respectively, Pa; l is the length of the sample, cm; A is the cross-sectional area of sample, cm2.
Effective stress is a key factor in deforming coal samples and determining gas permeability. Normally, effective stress is the difference between the external ground pressure and the internal gas pressure of coal. The equation can be expressed as follows: where , and are effective stress, axial stress and confining stress, respectively, MPa; and are inlet and outlet pressures of gas, respectively, MPa.

Coal is an extremely complex porous organic rock in which lots of cleats and pores are developed. According to the dual-porosity coal structure model, the inner space of the coal body consists of pores in the coal matrices and fractures around the coal matrices. In this study, we focused more on the gas flow in the pores.
Coal samples were sourced from the Tunlan coalmine near Qinshui Basin, Shanxi, China (Figure 1). The absolute gas emission of this coalmine is about 260 m3/min, and the NO. 8 and NO. 9 coal seams are closely overlapped with a total thickness of about 10 m and with a vertical spacing distance between 0.1 and 2.4 m. The employed coal blocks were taken from the NO. 8 coal seam at a buried depth of more than 800 m. The sourced coal blocks were processed into ISRM suggested samples with a dimension of φ50 mm × 100 mm (Figure 2a). It should be noted that we tried to drill intact coal without cleats during the sampling procedures. Samples were rejected if obvious cleats were found or if a cleat penetrated the coal sample. Finally, 40 samples were made and tested in this study. The basic properties of the coal sourced from the NO. 8 coal seam of the Tunlan coalmine are listed in Table 1 in detail.
The initial moisture content of the Tunlan coal sample was determined to be 1.61%. In order to prepare samples with different moisture contents, the coal samples were dried using a heating control system at a constant temperature of 105 °C to achieve moisture contents of 0.18% and 0.76%. Afterward, the original coal sample with a moisture content of 1.61% was connected to a manual pressure test pump and a closed kettle in order to inject water at a constant high pressure of 5 MPa into the coal sample. After maintaining the injection pressure for 24 h, coal samples with a moisture content of 3.15% were obtained. Finally, four groups of coal samples with different moisture contents (i.e., 0.18%, 0.76%, 1.61% and 3.15%) were obtained (Figure 2b).

The experiments were conducted by employing the WYS-800 triaxial loading–gas seepage test setups. This apparatus consists of a loading frame, a servo-hydraulic station, an air path system, a triaxial vessel, a constant-temperature oil bath, and a data acquisition system. The schematic diagram of the testing apparatus is displayed in Figure 3. The main technical parameters are as follows: axial stress range 10–800 KN, confining stress range 0–15 MPa and gas pressure range 0–15 MPa.
The test methods are described as follows: (1) Fully wrap the coal sample with a Teflon jacket and then locate the sample inside the triaxial vessel. (2) Load the confining stress to 1 MPa at a rate of 0.01 MPa/s and apply the axial stress of 5 KN at a speed of 0.1 KN/s. After the initial stresses become stable, load the axial and confining stresses alternately until the target stresses are achieved. (3) Inject high-purity CH4 gas into the coal sample. After this has been fully absorbed and desorbed on the coal sample, remove the residual air in pipes and open the outlet and inlet flow valves. Then, measure the gas permeability. (4) Close the outlet flow valve and finish a test. (5) Repeat step 1 to step 4 for the remaining coal samples to complete all tests. Overall, the confining stress in these tests varies from 2 to 8 MPa, and the gas pressure varies from 0.5 to 1.4 MPa.

4.1. Effect of Axial Stress on the Gas Permeability of Coal Samples

Originally, the coal is reserved in a balanced stress state in the depths. Following underground coal mining, this initial balanced stress state is broken. Consequently, the vertical and horizontal stresses of coal seams are changed, resulting in evolutions in the pore structure and permeability of the coal mass. Since the axial/normal stress and lateral/confining stress have different effects on the permeability of coal samples, in this section, we first present the influence of normal stress on the permeability evolution of gas-containing coal at two moisture contents (0.18% and 3.15%) and under a given confining stress (4 MPa). It should be noted that the axial stress during the sample loading process is gradually increased by a stress rate of 1 MPa per step until the coal sample fails. The permeability is measured intermittently during axial stress loading. As shown in Figure 4a, the permeability versus normal stress curves of gas-containing coal samples can be roughly described by a ‘V’ shape, in which the gas-containing coal permeability first decreases and then increases with increasing axial stress.
During the triaxial compression of coal samples, the obtained stress-strain curve can be roughly divided into two stages, i.e., pre-yield and post-yield stages. In the pre-yield stage, the coal sample is first compacted and then undergoes elastic deformation. In the first compaction process, an upwards concave trend in the stress–strain curve can be observed, which may be due to the closure of primary cracks, pores and voids in coal samples [20]. During the elastic deformation process, the loading increases linearly with axial strain. Following the elastic deformation, the yield strengths are exceeded, after which it enters into the post-yield strength stage. Subsequently, the plastic deformation and macroscopic failure of the coal sample will occur in the post-yield stage.
The deforming and failure response is closely related to the evolution of gas permeability in coal samples. During the first compaction process before coal yield, the internal cracks, pores and voids are gradually compacted, resulting in the gas migration channel closing and permeability decreasing. Furthermore, the internal pore structure of the coal sample is further compacted during the elastic deformation of coal. Therefore, the permeability drops continuously to a minimum value during the pre-yield stage. The minimum gas permeabilities of coal samples with moisture contents of 0.18% and 3.15% are about 2.75 × 10−5 μm2 and 0.6 × 10−5 μm2, respectively.
The increase in permeability mainly occurs after the coal sample yields. During this stage, the internal cracks in the coal are initialized and developed. The gas migration channels in the coal are gradually increased and connected, thus resulting in enhanced permeability. With a further increase in axial stress, the coal body enters a macroscopic failure process (Figure 4b), greatly improving gas permeability.

4.2. Effect of Confining Stress on the Gas Permeability of Coal Samples

4.3. Coupled Effects of Axial and Confining Stresses on the Gas Permeability of Coal Samples

4.4. Effect of Gas Pressure on the Gas Permeability of Coal Samples

4.5. Effect of Moisture Content on the Gas Permeability of Coal Samples

Understanding the permeability evolution of gas-containing coal is significant to both the extraction of CBM and the prevention of CH4 gas outburst disasters. In this study, the WYS-800 triaxial gas seepage apparatus was employed to investigate the evolution of gas permeability in the Tunlan coal samples under various stresses, moisture contents and gas pressures. The following conclusions can be drawn: 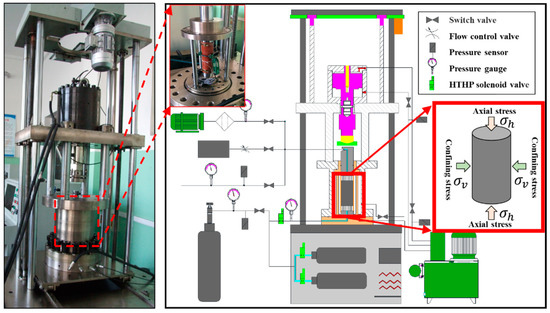 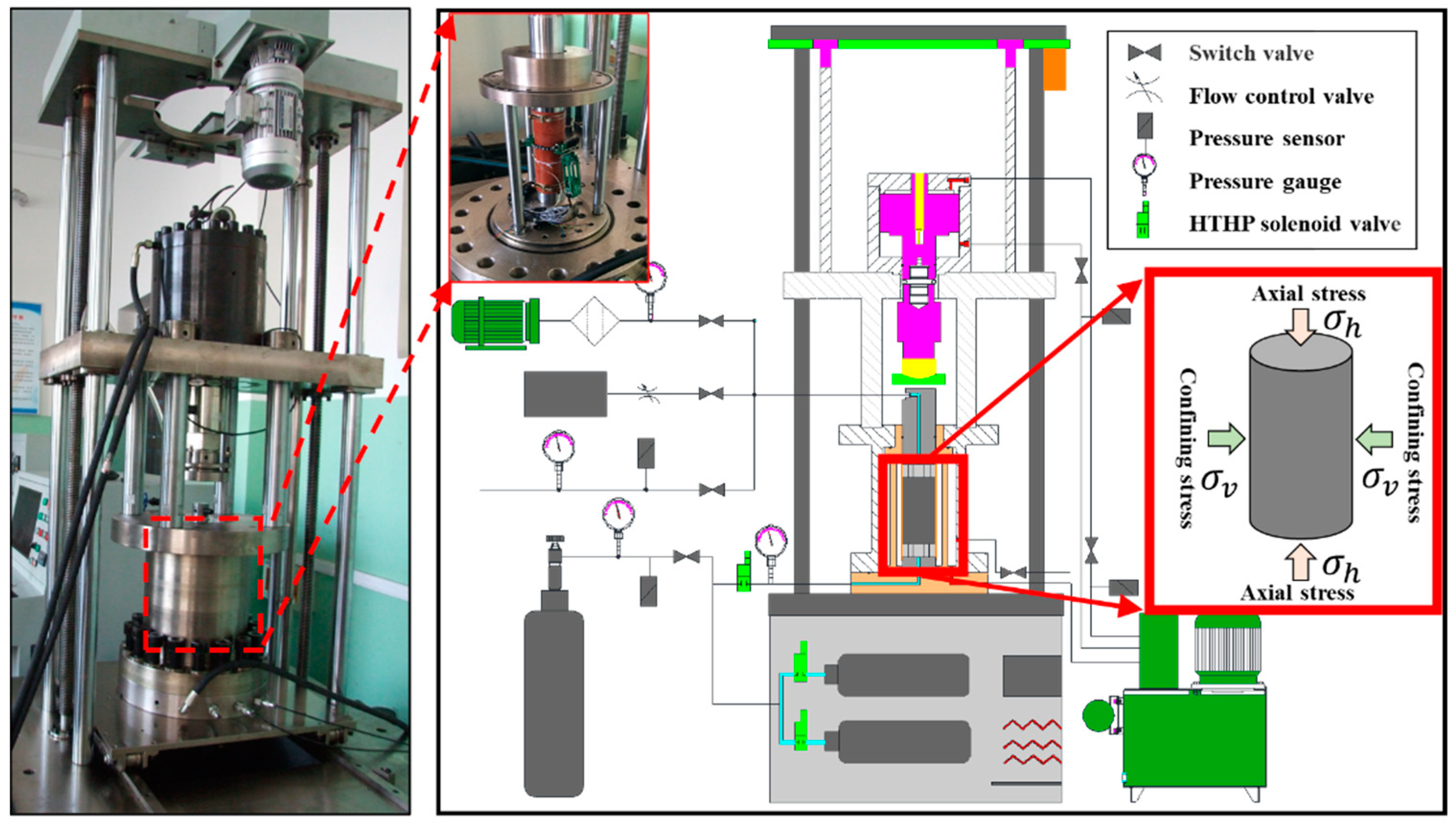 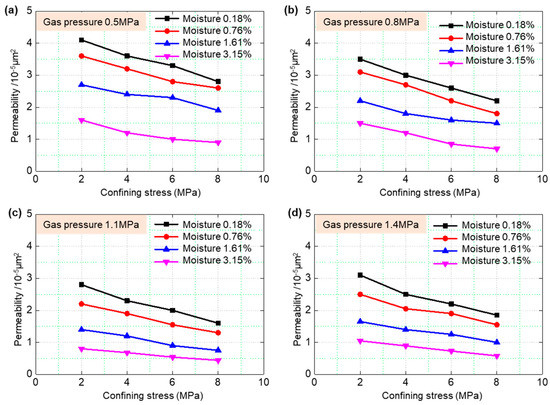 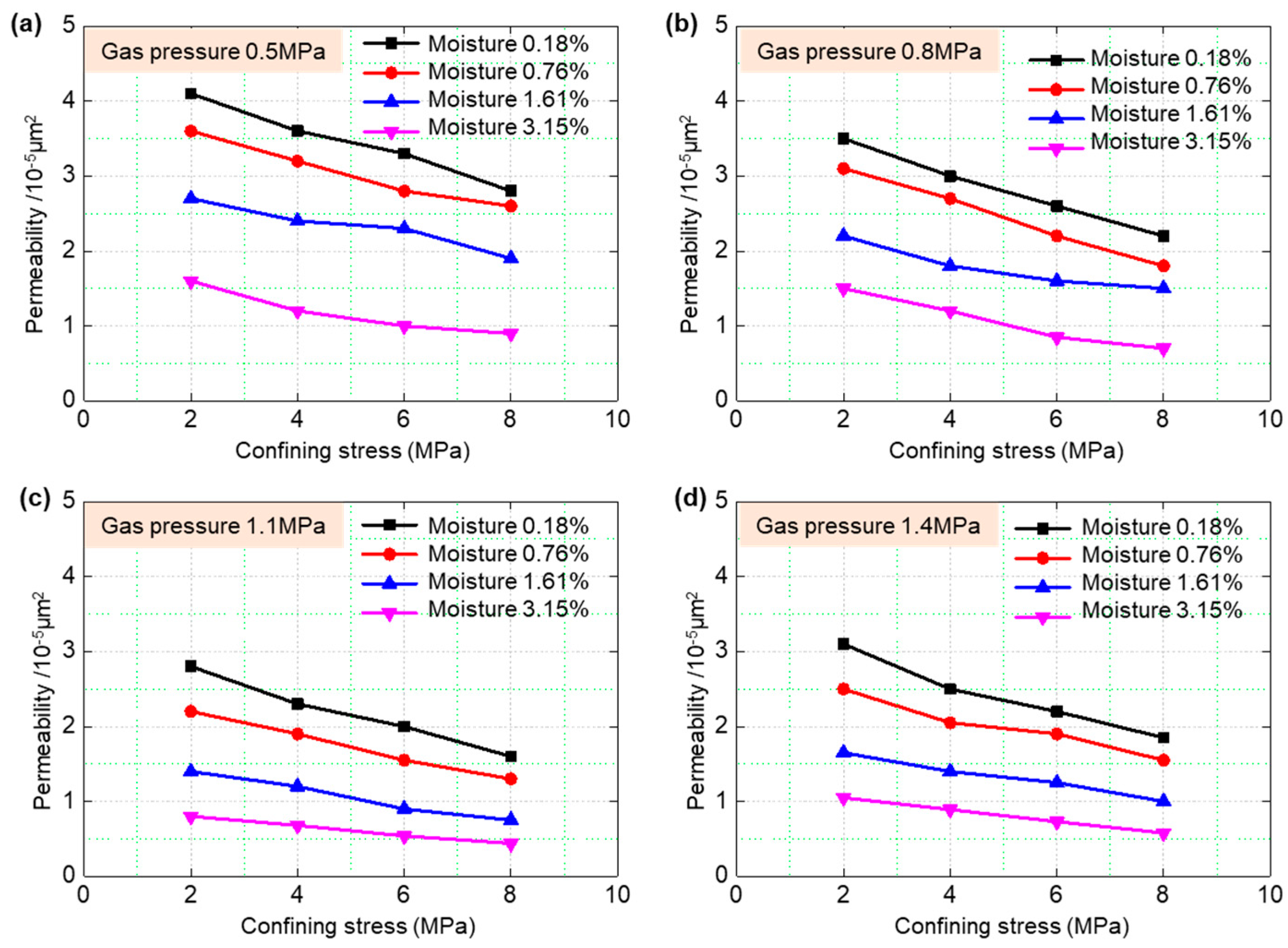 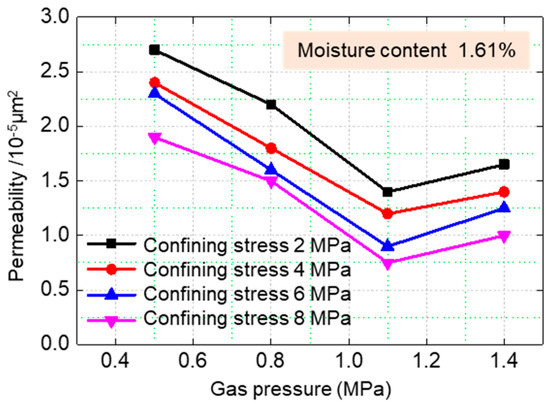 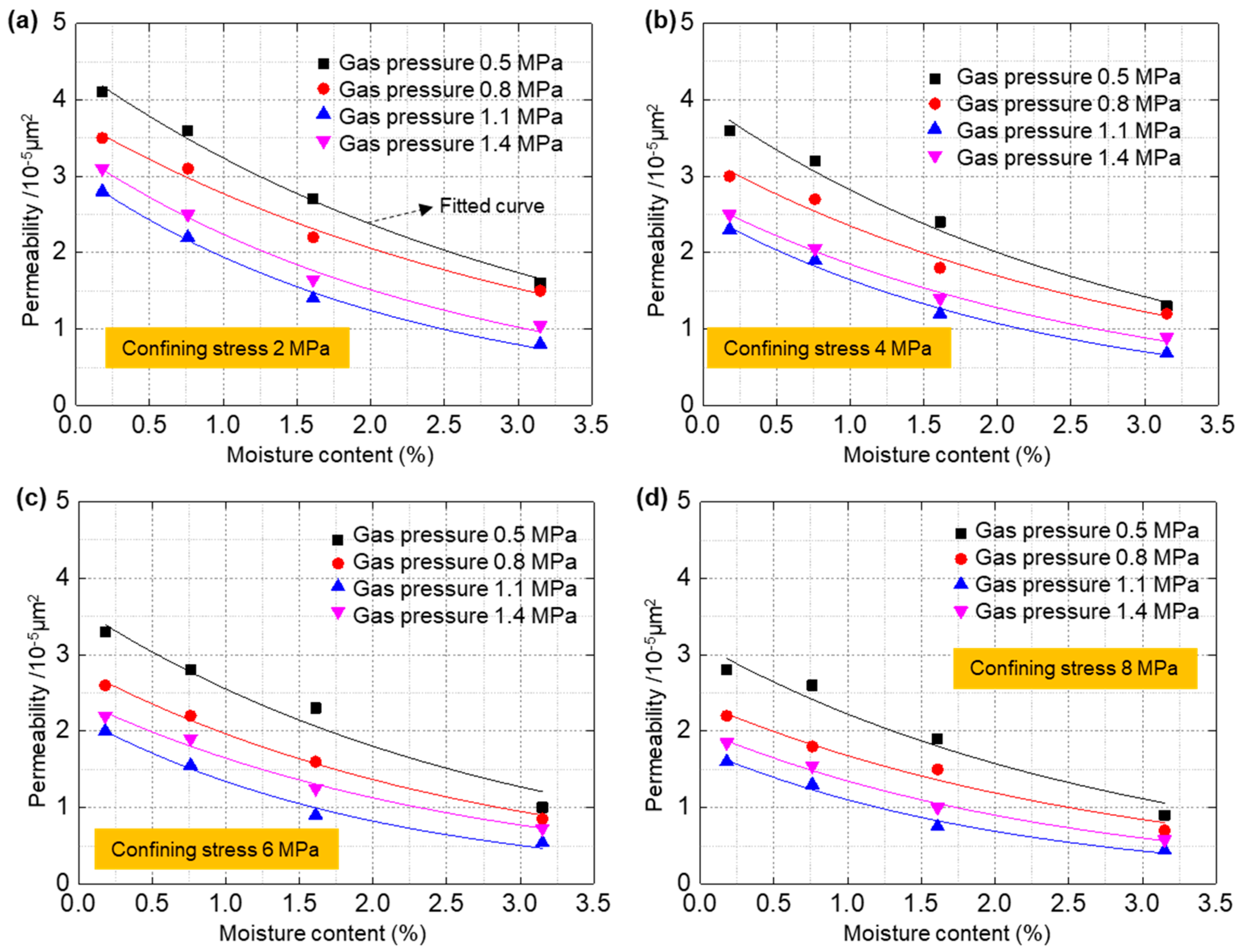