Not All Rivers Are Created Equal: The Importance of Spring-Fed Rivers under a Changing Climate
Previous Article in Journal

Distribution, Drivers, and Threats of Aluminum in Groundwater in Nova Scotia, Canada

To characterize the acidification and Al status of Nova Scotia groundwater, we extracted a dataset of relevant parameters (Al, Ca, pH, TOC, and turbidity) from the Nova Scotia Groundwater Chemistry database (NSGCDB) [43]. The NSGCDB is maintained by the Nova Scotia Department of Energy and Mines and consists mostly of non-domestic, untreated (raw) well water sample results from across the province, collected between 1954 and the present, from wells intercepting both bedrock and surficial aquifers. Most drilled wells in Nova Scotia are less than 100 m deep, intercepting fractured bedrock aquifers, with about 6 to 12 m of casing to keep unconsolidated sediments from collapsing and the bedrock section left as an open hole [44].The NSGCDB was compiled from various federal, provincial, and municipal data sources of ambient groundwater chemistry, including water quality monitoring data from government buildings with well water supplies, community well water surveys, and Nova Scotia Department of Environment and Climate Change groundwater chemistry data from registered public drinking water supplies, pumping tests, municipal groundwater supplies, and provincial observation wells; well construction information is available for about 30% of the well sample data. Analytical methods vary, but Al concentrations were typically analyzed using ICP-MS as a total metal digest of an unfiltered water sample, as recommended for assessments of drinking water quality. Note that DOC is not typically measured in standard analyses of groundwater quality and so TOC was used as an indicator parameter. Although the quality of the well water chemistry data used in the analysis varies due to inconsistent sampling and laboratory analytical methods, it is still considered useful for detecting regional-scale (e.g., >1:50,000) trends.
Only untreated, and suspected untreated, well water samples where the laboratory detection limit was no greater than 10 µg/L were retained in the dataset. Where multiple sample results were available for a given well location, the most recent Al result was used in the analysis. Left-censored data (i.e., values less than the laboratory detection limit are not known) with multiple detection limits were included in the dataset, and therefore survival (non-parametric) analysis methods were applied. The Al data were plotted on the Province’s Groundwater Regions Map [45], which subdivides the province into five major bedrock groundwater regions based on bedrock geology mapping [46], using ArcGISTM10 [47] geographic information system software, and a groundwater region was assigned to each water sample. Uncertainty associated with the assignment of bedrock groundwater regions to well water samples increases near geologic boundaries due to factors such as map scale, interpolation of geologic boundaries, and gradational contacts between units. Water samples located near these boundaries were therefore carefully reviewed, and stratigraphy information from well logs was consulted where it was available to verify the assignment of the groundwater region. Statistical summaries of Al in well water concentrations were produced for each of the bedrock groundwater regions, while overlying surficial till units and aquifers were treated as a single surficial groundwater region.
Exceedance rates were calculated for the range of published Al thresholds for aquatic and human health. Most jurisdictions have published operational thresholds for Al levels, but these mainly apply to municipal water systems. For example, the US EPA encourages utilities to maintain Al concentrations below 50 µg/L in drinking water, but their secondary maximum contaminant level (i.e., the recommended but non-enforceable guideline) is flexible and allows for concentrations up to 200 µg/L [17]. The WHO guideline indicates that Al concentrations above 100 µg/L may impact water colour, and that all municipal treatment systems should maintain Al concentrations below 200 µg/L [23]. The operational guideline from Health Canada also allows for Al concentrations of up to 100 µg/L, while a new health-based guideline from Health Canada of 2900 µg/L was released in 2021 [22]. The WHO previously established a health-based limit of 900 µg/L [23]. In comparison, the Canadian guideline for the protection of freshwater aquatic life for long-term concentrations of aluminum is much lower, ranging from 5 µg/L, where the pH of water is <6.5, to 100 µg/L, where the pH of water is ≥6.5. Due to the varying thresholds found in the literature, we calculated exceedance rates for four different Al limits: 10 µg/L, 100 µg/L, 900 µg/L, and 2900 µg/L.
Using the Kaplan–Meier method, statistical summaries of Al concentrations in well water were produced for each groundwater region (Table 1). Exceedance rates for the four Al thresholds in each groundwater region were also calculated (Table 1, Figure 1). The Peto and Peto modification of the Gehan–Wilcoxon test was used to determine whether groupings of samples by groundwater region, well type, and turbidity level were statistically different populations. A pairwise comparison test to compare medians was applied to evaluate stochastic dominance within the groupings. A Kendall’s tau test was used to test for relationships between Al concentrations and various other water chemistry parameters. A multivariate regression was computed using maximum likelihood estimation to model the relationship between Al and other water chemistry parameters. Statistical analyses were carried out in R version 4.0.3 using the Nondetects and Data Analysis for Environmental Data (NADA) package [48].

This study describes the acidification status and resulting Al concentrations in Nova Scotia’s groundwater, leading to a greater understanding of areas where private well water, in addition to surface waters such as rivers and lakes, may be at risk. Al concentrations in some areas of Nova Scotia are high enough that they may present a risk to both aquatic and human health. A small number of samples exceed the Health Canada MAC of 2900 µg/L, but these results highlight the need for routine well water testing for Al and other metals by private well users, which account for about 42% of Nova Scotia’s drinking water supplies. Furthermore, Al concentrations as low as 80 µg/L may have negative health impacts for people with chronic kidney disease [26]. The results show that Al concentrations in groundwater commonly exceed the threshold for toxicity to aquatic life such as Atlantic salmon, which is important in freshwater systems receiving significant inputs of groundwater. This issue will become even more important as the climate warms and cold-water fish species become more dependent on groundwater-fed areas of streams for their survival.
Al concentrations vary significantly with groundwater region (bedrock aquifer type), with the highest Al concentrations occurring in plutonic and metamorphic bedrock aquifers, along with the province’s surficial aquifers. The present analysis demonstrated regional-scale trends, although it should be noted that there is significant spatial heterogeneity in Al concentrations due to factors such as the availability of Al-containing minerals in contact with groundwater flow and the susceptibility of these minerals to weathering, along with variability in the geochemical conditions influencing Al mobility (e.g., pH, availability of complexing ions).
The observed relationships between pH, Ca and TOC all show the importance of pH controls on Al release and mobilization in groundwater. The province’s map of potential corrosivity of groundwater [51] may be useful in highlighting acid-sensitive areas where there is a higher likelihood of elevated Al in groundwater. We recommend that all private well users (but especially those in high-risk areas) test their water supply for Al. The results of this study can be used in support of risk communication efforts to promote routine testing of private wells for metals, including Al. Future studies should focus on the export of Al from groundwater to surface water in high-risk areas, especially those areas that host rivers containing significant populations of Atlantic salmon.

This research was partially funded by an NSERC Discovery Grant.

The data presented in this study are available on request from the author author [email protected] The data are available in part at https://fletcher.novascotia.ca/DNRViewer/?viewer=Groundwater, accessed on 1 June 2021.

The authors would like to acknowledge the contributions made to this study by Abby Millard, who provided initial work on the analysis of the data and Chris White for his helpful comments on mineral occurrences of Al in Nova Scotia. 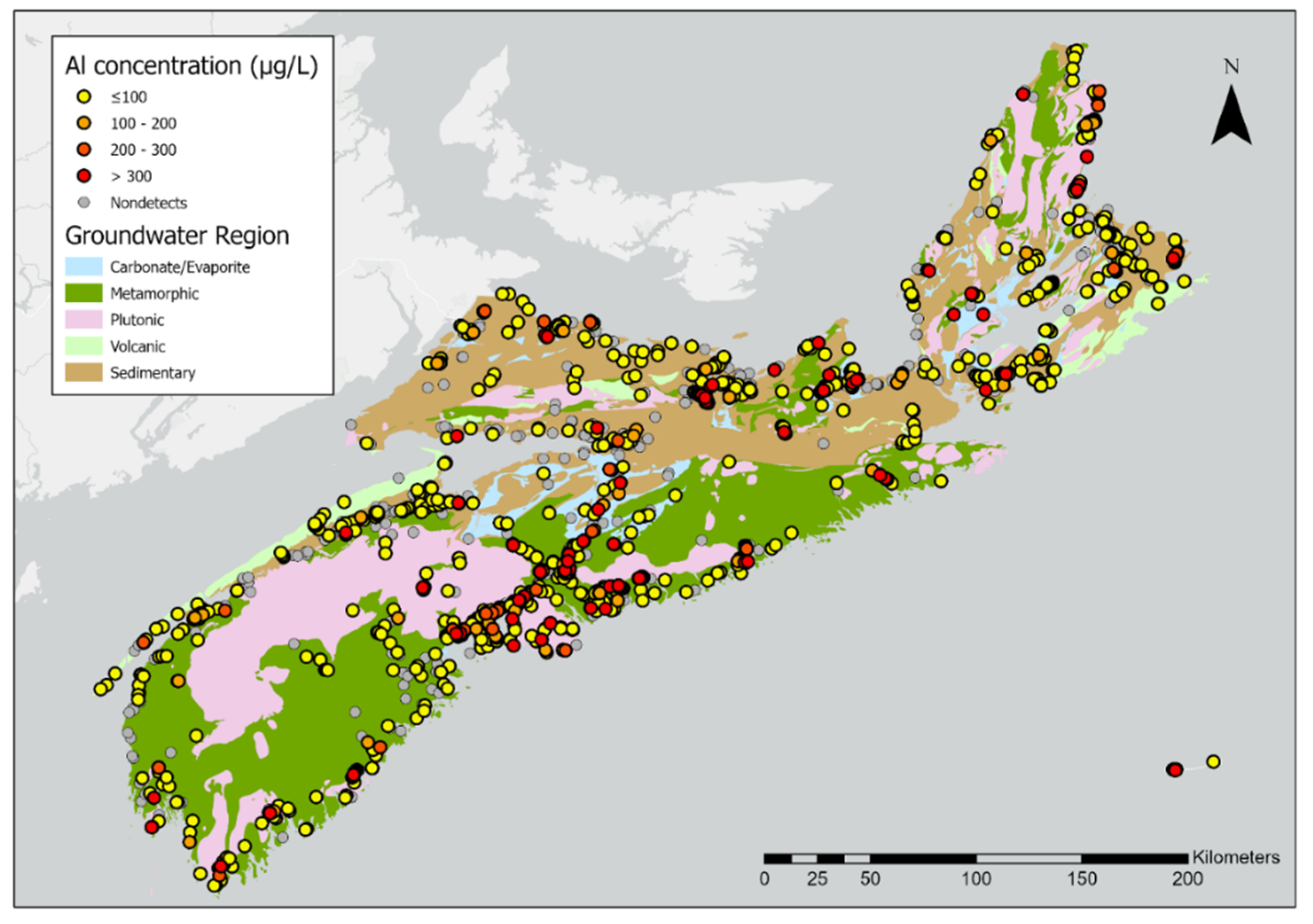 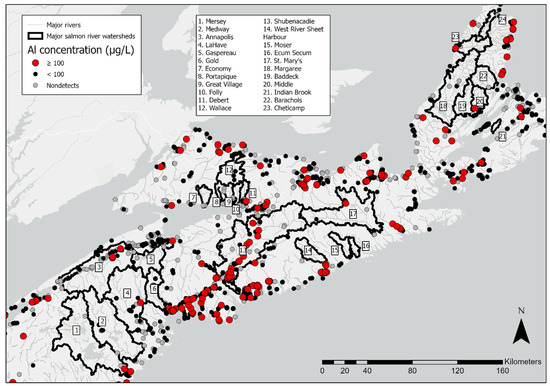