Geomorphological Changes of a Migrating Sandbank: Multidecadal Analysis as a Tool for Managing Conflicts in Coastal Use
Previous Article in Journal

Integrated Geological, Hydrogeological, and Geophysical Investigations of a Barchan Sand Dune in the Eastern Region of Saudi Arabia

The coastal evolution of the microtidal Tubul-Raqui wetland in south-central Chile (36° S), which historically has been affected by large earthquakes and tsunamis, particularly the 1960 (Mw = 9.5) and 2010 (Mw = 8.8) subduction earthquakes and their associated tsunamis, is analyzed. Historical aerial photographs and topographic and bathymetric surveys from the 1961–2017 period, as well as salinity, sediment, and flora data obtained following the 2010 earthquake were used for comparison with data from prior to the event. A steady state of the shoreline was established, with an average erosion rate of −0.016 m/year in the 1961–2017 period. However, erosion predominated in the period between these two large earthquakes (1961–2009), with an average rate of −0.386 m/year. The wetland dried up, partially recovered saline intrusion a year later, and recovered the salinity conditions it had before the earthquake two years later. The postearthquake effects on the floristic composition were not significant, with the species Spartina densiflora, which presented a high tolerance to these types of changes, predominating. Moreover, 75 percent of the taxa in pre- and postearthquake conditions coincided, with the halophyte species Spartina densiflora, Sarcocornia fructicosa, and Cotula coronopifolia predominating, while the best-conserved community was Spartina-Sarcocornia association located in the saltmarsh. Seven years after the earthquake, the shoreline presented an accretion rate of 2.935 m/year; if the current tectonic conditions prevail, an erosive trend can be expected in the coming decades. The morphological variability and the changes associated with the shoreline in this wetland are strongly controlled by tectonic factors. Criteria aimed at integrated coastal management to promote its occupancy and use in accordance with its evolutionary dynamics are proposed. View Full-Text
Keywords: coastal evolution; geomorphological change; wetland; earthquakes; coastal management coastal evolution; geomorphological change; wetland; earthquakes; coastal management
►▼ Show Figures 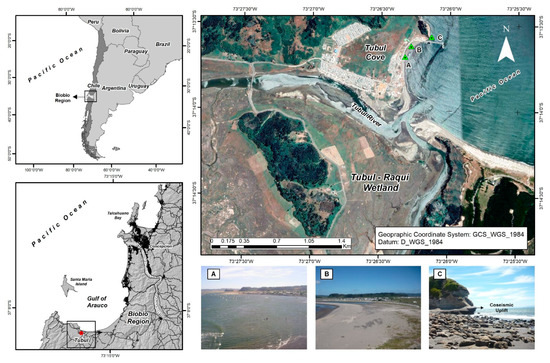