Assessing Water Withdrawals in Scarce-Data Transboundary Areas by Use of Dynamic Precipitation–Flow Relationships: The Case of the Hasbani River Basin
Previous Article in Special Issue

Promotion of the Development of Sentinel Species in the Water Column: Example Using Body Size and Fecundity of the Egg-Bearing Calanoid Copepod Eurytemora affinis

The development of sentinel species in aquatic ecosystems is mostly based on benthic organisms; however, organisms living in water column such as zooplankton have received less attention, except for some cladocerans. In this paper, a new ecological indicator based on simple measurements of the size and fecundity of egg-bearing calanoid copepods is developed. The well-studied estuarine copepod Eurytemora affinis is used to illustrate this new framework. A large database obtained from laboratory experiments developed under different conditions is used to define a reference regression line between clutch size (CS) and prosome length (PL). The same database allowed one to confirm that the coefficient of variation (CV) of CS is an adequate estimator of the accumulated stress at population level. The CV of PL shows very little variability in all experimental and field conditions. The values of CS and PL obtained from the Seine, Loire, Gironde, Scheldt and Elbe estuaries in Europe are compared to the reference regression line. A quality index (QI) is calculated as a percentage of difference between the observed and the predicted CS. The QI classified 19 samples collected in the Seine estuary between 2004 and 2010 into four classes according to the physiological condition of the copepod female. A single sampling from June 2004 (5.26%) showed a very good condition, whereas 57.9% of the sampling dates confirmed good conditions. On the other hand, four sampling dates were associated to very bad conditions and three sampling dates indicated bad conditions. Seven additional samples obtained from other European estuaries between 2006 and 2009 were also used. Females showing poor conditions were observed in the early spring of 2005 and 2008 as well as during the month of November. These years were characterized by very strong climatic anomalies with a very cold late winter in 2005 and a warm winter in 2008. Therefore, it seems that the QI perfectly reflected the strong stress caused by the sudden change in hydro-climatic conditions that have certainly affected the physiology of copepod females and probably the availability of food. The new indicator is very simple to calculate and can be generalised to several aquatic ecosystems (fresh water and brackish water) by targeting the dominating egg-bearing calanoid copepods. As in the case of E. affinis, the development of sentinel species based on copepods or cladocerans can enrich ecological and ecotoxicological studies given their capacity to integrate the variability of their habitats’ quality at the individual and population levels. View Full-Text
Keywords: sentinel species; calanoid copepod; Eurytemora affinis; body size; fecundity; freshwater; brackish water; ecological indicator sentinel species; calanoid copepod; Eurytemora affinis; body size; fecundity; freshwater; brackish water; ecological indicator
►▼ Show Figures 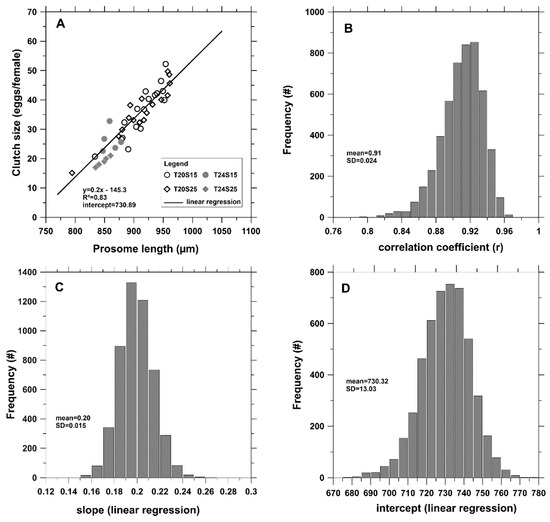