Computational fluid dynamics (CFD) is a division of fluid dynamics that practices numerical computation and different data structures to resolve various flow problems. The fundamentals of CFD are based upon the Navier–Strokes equations. Finite element and finite difference methods are particularly used for solid structures, they require more memory, and they have a slower solution than the finite volume method. In the finite volume method (FVM), the leading differential calculations called the Navier–Strokes equations, are solved out by discretizing the whole volume into small sets of volumes. Fluent software utilizes the finite volume method to discretize the Navier–Strokes equations. The benefit of utilizing the finite volume method is that it simply allows the unstructured meshes to be easily formulated.
In this paper, four types of stepped spillways are numerically simulated by using Fluent software. The stepped spillways vary from mild to steep slopes. All four stepped spillways which are represented in Figure 2 are simulated by using the multiphase volume of fluid (VOF) method and realizable k-ϵ turbulent model. Different multiphase models are used such as the mixture and Eulerian models. Still, the volume of fluid (VOF) is the best for following the boundary layer in the stepped spillways from the literature. In numerical modeling, SIMPLE is used to couple the pressure and velocity. The SIMPLE algorithm is used for transient simulation because, in this case, simulation is transient, so we use the SIMPLE process for velocity-pressure coupling Second order upwind and first order upwind schemes used for momentum and turbulent kinetic energy dissipation rate and pressure staggered option (PRESTO) are used. A numerical model of stepped spillway consists of three steps spillways which vary in channel slope (12.5°, 19°, 29°, and 35°). The details of all four stepped spillway models are described in Table 1. The channel width is 0.4 m. The entire stepped spillway model has the same steps. The steps of the spillways varying in length and height in all four models to change the slope of the spillway are shown in Figure 2.

Very fine mesh was applied to achieve good results during the simulation. The number of mesh elements was 287,529 and the number of nodes was 317,868. Ansys, ICEM, meshing software, Canonsburg, USA, as used for meshing. Unstructured grid meshing was applied with high smoothing with a minimum size of 0.001 m. Ten inflation layers were applied along the steps to get better results near the steps. The application of inflation layers was used to help study flow results near the steps. Figure 3 represents the boundary conditions, and the overall view of the mesh used for the computation of models.

The realizable k-ϵ model developed by Shih et al. [46] is different from the standard k-ϵ model in these features. A variable for the coefficient of uniformity is introduced called and is used in the turbulent viscosity method to satisfy the scientific limitations in the Reynolds stresses, which is related to the physics of the turbulent flows. A different equation of dissipation rate was introduced, which is constructed upon the dynamic equation of average square vortices fluctuation. In this equation, the production term is not involved, and the destruction term does not have any uniqueness. The realizable k-ϵ model executes better with respect to standard k-ϵ in the following aspects when the flow features include strong streamlines twists, turning, and vortices. Because flow over stepped spillways are highly turbulent and include vortices beneath the pseudo-bottom, to better study the turbulence, rotation, and vortices the realizable k-ϵ model is used in this paper. The equations for turbulent kinetic energy and dissipation rate k, ϵ used in realizable k-ϵ are the following.

In this paper, four different stepped spillway models with different slopes varying from mild slopes to steep slopes were simulated using the volume of fluid (VOF) and k-ϵ realizable models in order to calculate the inception point location and length of the non-aerated flow zone, and how the inception points’ location and length of non-aerated flow zone vary with the channel slope of the stepped spillway. To this end, four stepped spillways with slopes of 12.5°, 19°, 29°, and 35° were simulated at different discharge rates (0.625, 0.75, 0.875, and 1).

3.1. The Commencement of the Skimming Flow Regime

The data and materials that support the findings of this research are available from the corresponding author upon reasonable request. 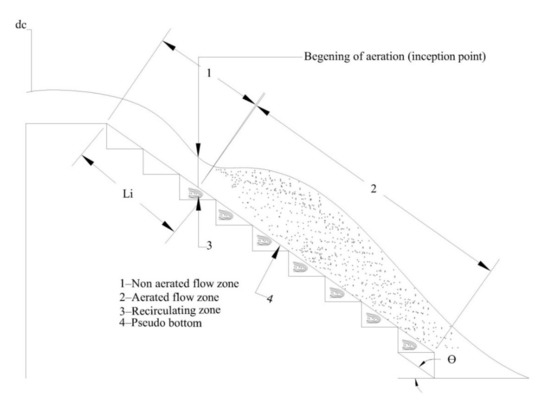 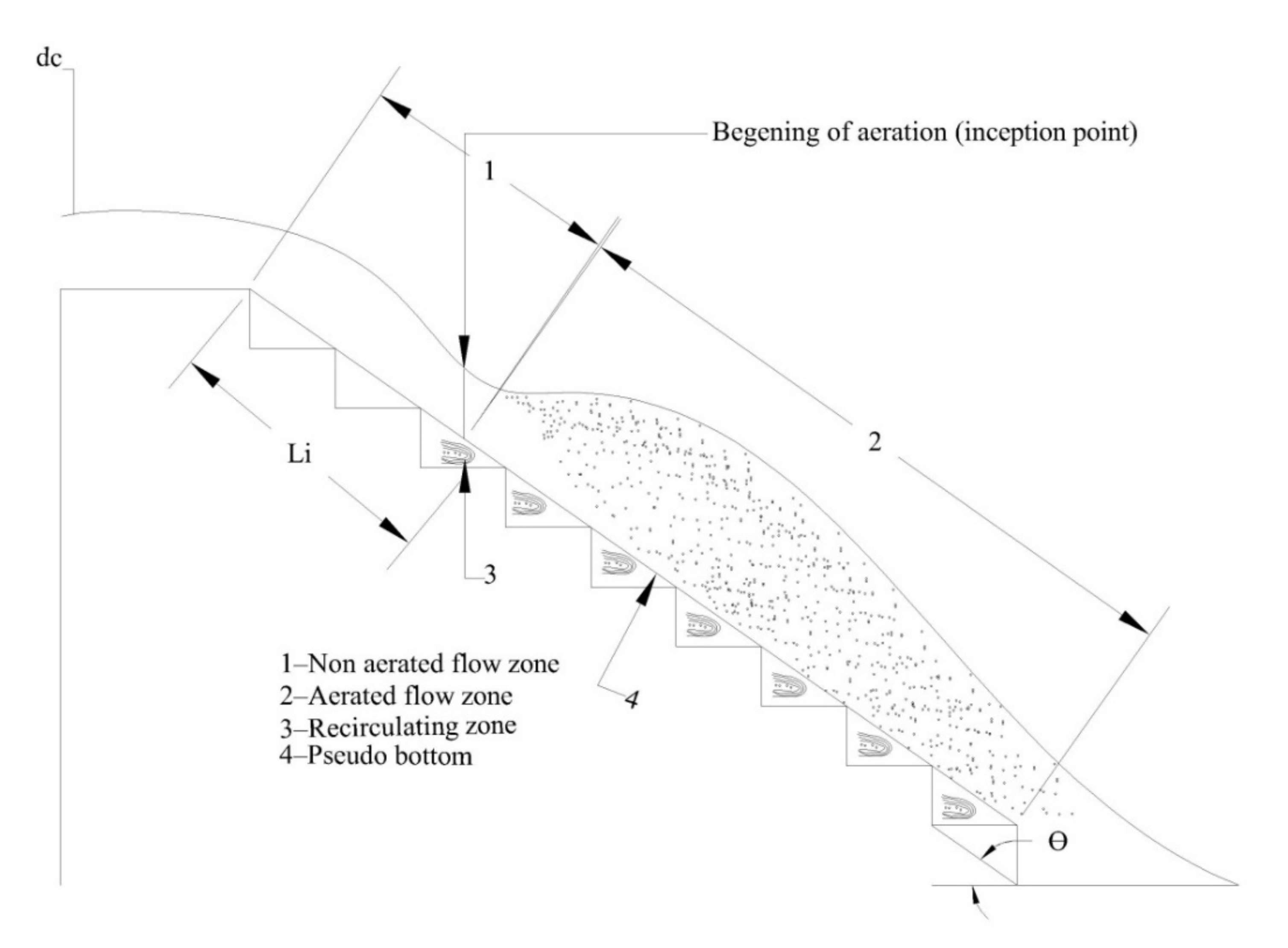 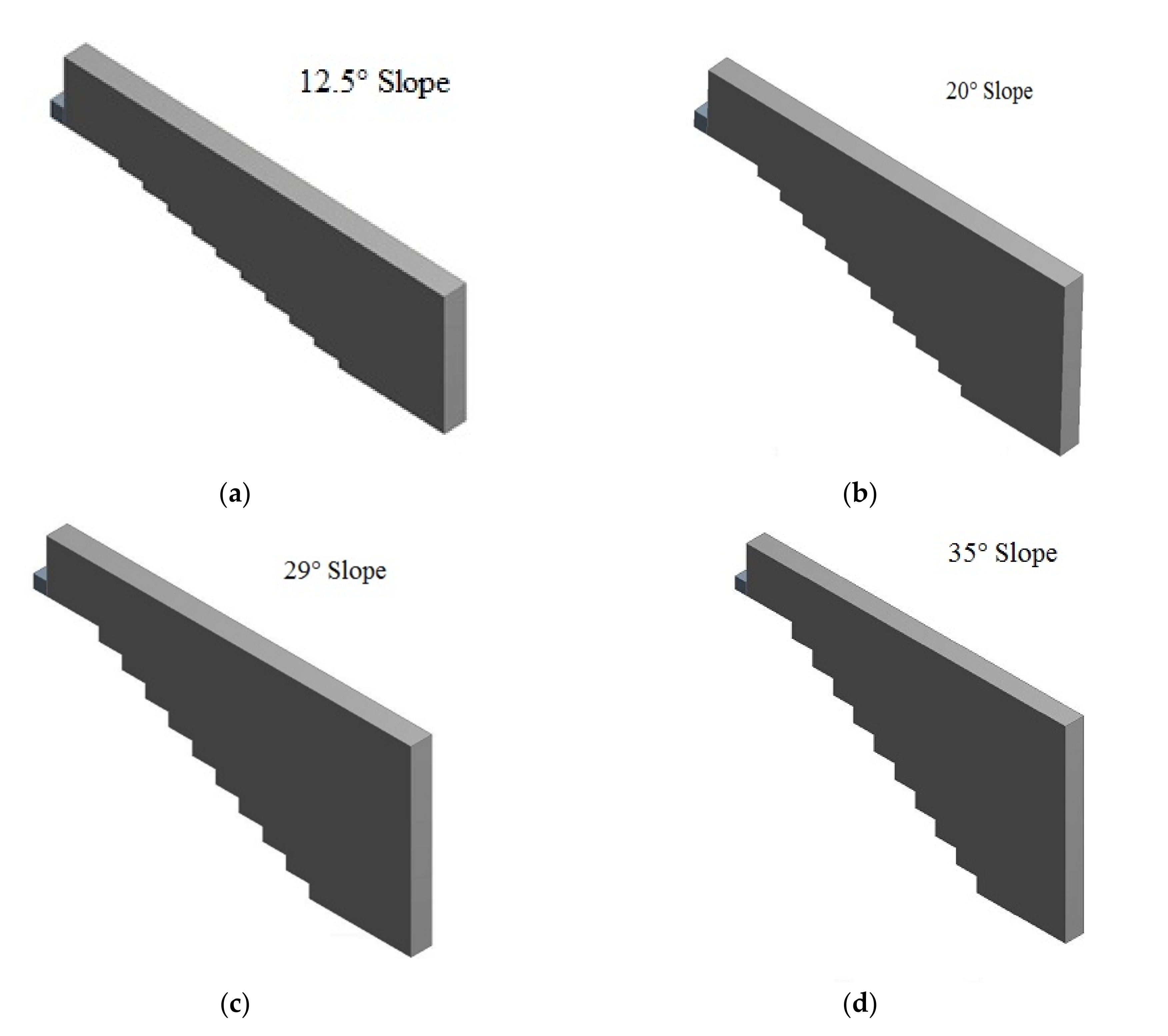 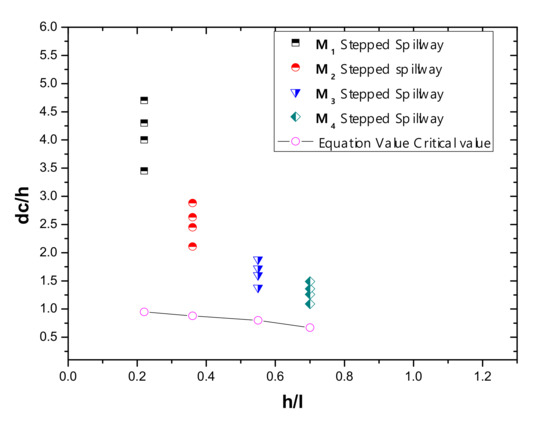 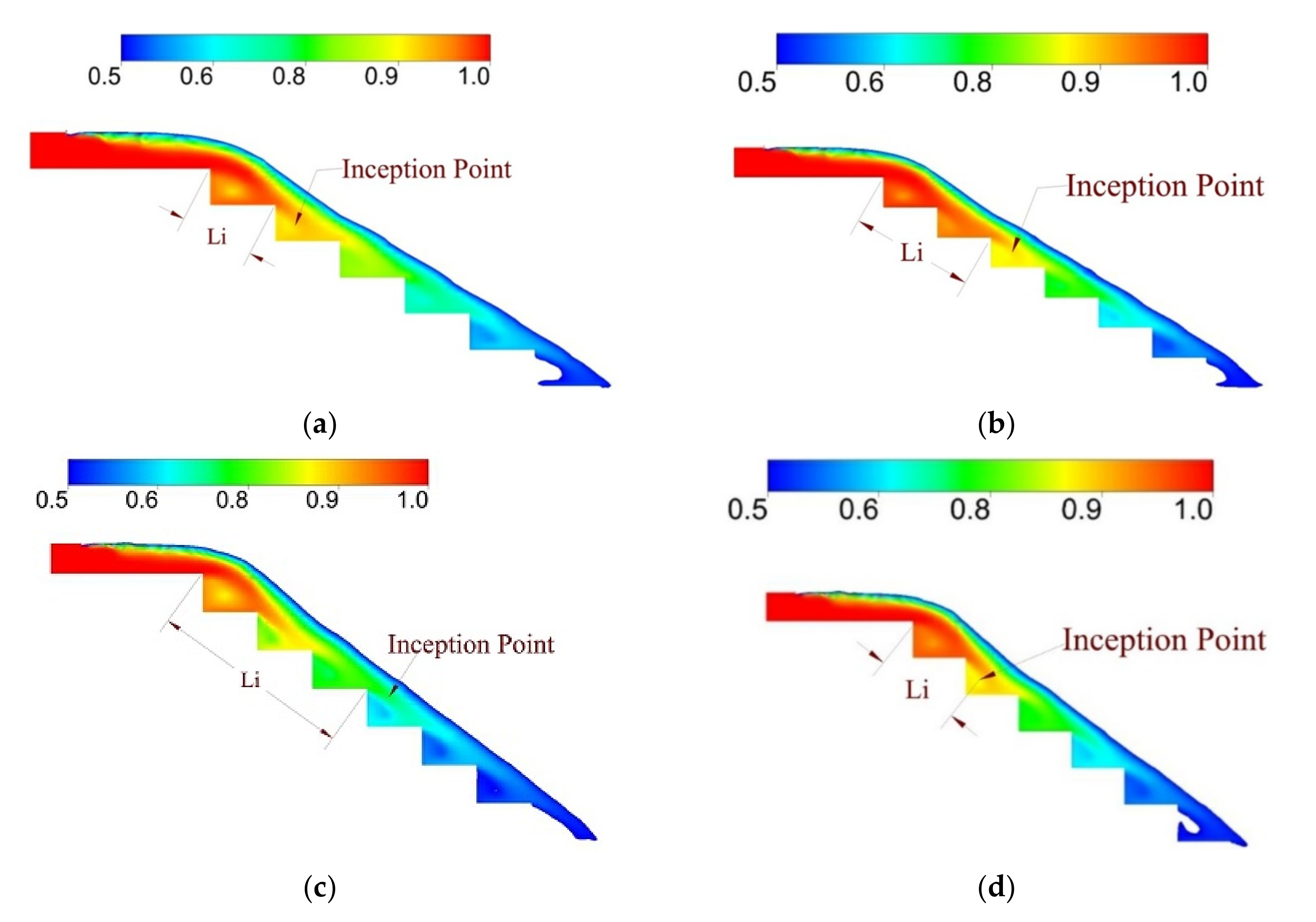 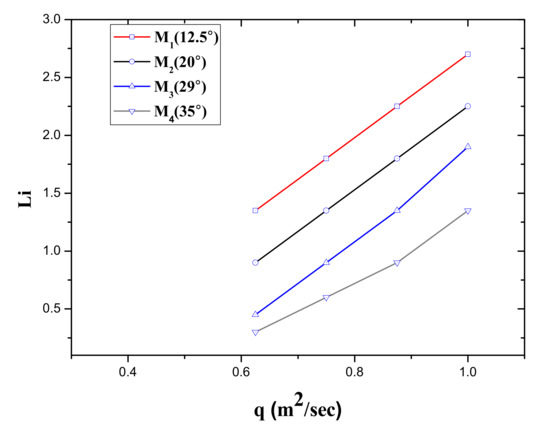 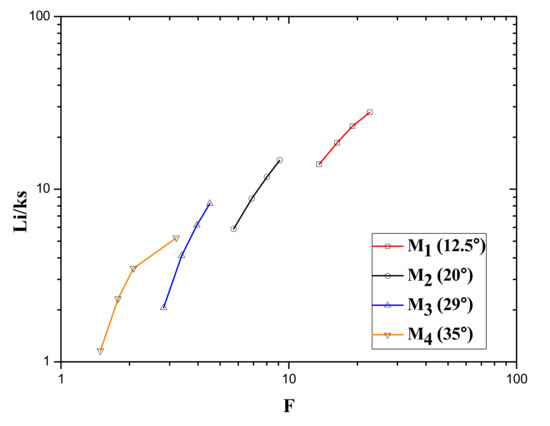 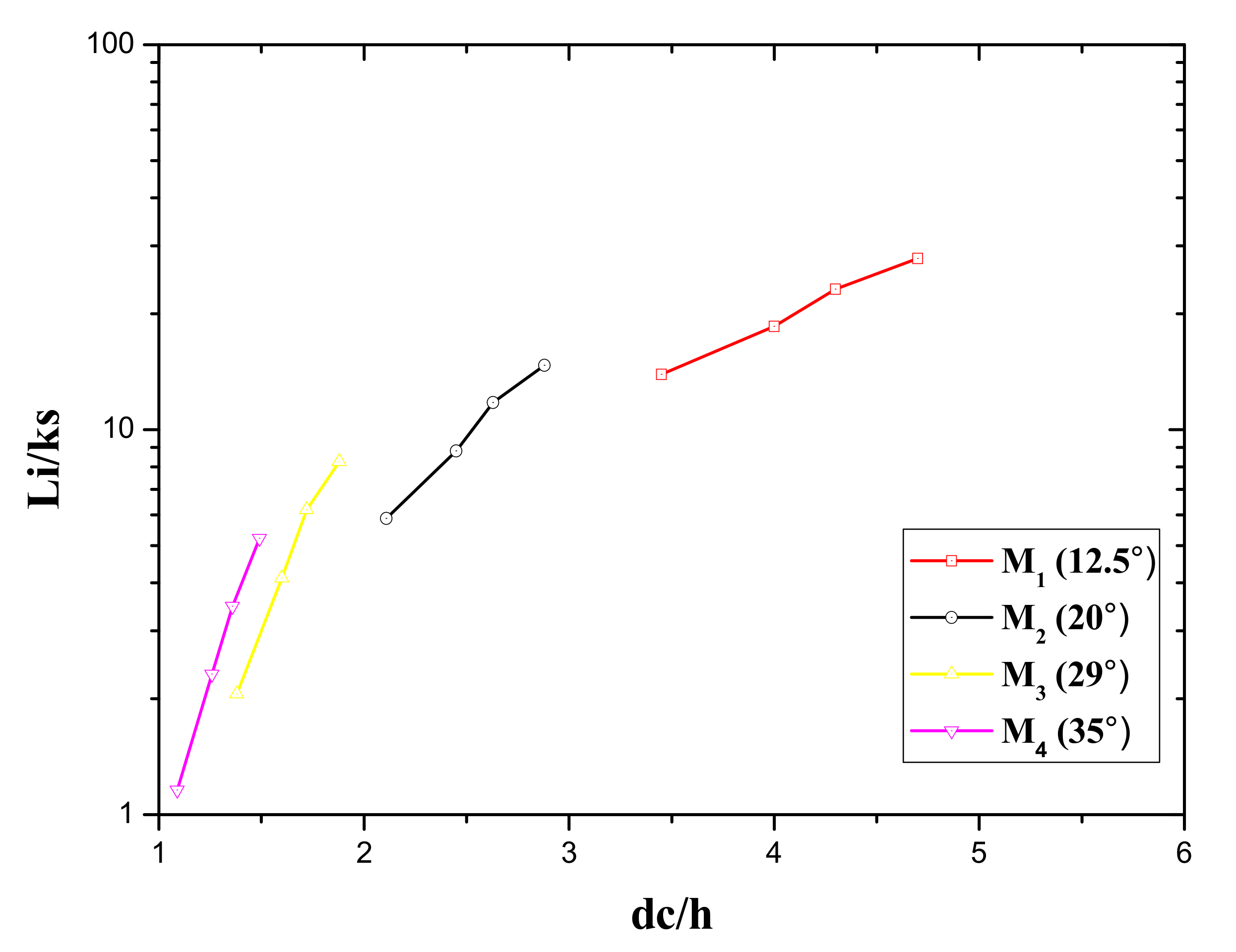