Biofilms can be considered the main source of microorganisms in drinking water distribution systems (DWDS). The ecology of a biofilm is dependent on a variety of factors, including the presence of microbial metabolites excreted by its inhabitants. This study reports the effect of the Gram-negative bacteria Methylobacterium oryzae on the idh gene expression levels and patulin production of Penicillium expansum mature biofilms. For this purpose, a RT-qPCR method to quantify idh mRNA levels was applied. In addition, the idh expression levels were compared with the patulin production. The results obtained revealed that the effect of the bacterium on pre-established P. expansum biofilms is dependent on the time of interaction. More mature P. expansum biofilms appear to be more resistant to the inhibitory effect that M. oryzae causes towards idh gene expression and patulin production. A positive trend was observed between the idh expression and patulin production values. The results indicate that M. oryzae affects patulin production by acting at the transcriptional level of the idh gene. View Full-Text
Keywords: bacteria; fungi; inter-kingdom biofilms; idh gene expression; patulin; quorum sensing inhibitor bacteria; fungi; inter-kingdom biofilms; idh gene expression; patulin; quorum sensing inhibitor
►▼ Show Figures 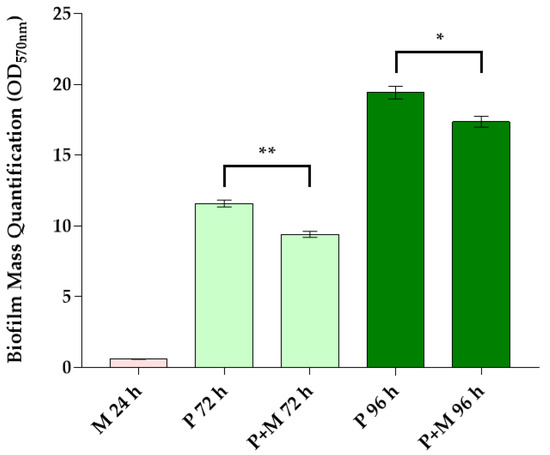