Blue Economy and Blue Activities: Opportunities, Challenges, and Recommendations for The Bahamas
Previous Article in Journal

The Ignalina Nuclear Power Plant (INPP) in Lithuania is a rare case when lake water is used instead of river or sea water for cooling. Lake Drūkšiai with water residence time of 3–4 year and undisturbed sediment layers is a unique system to assess the impact of a nuclear facility on the aquatic ecosystem with a sufficiently high temporal resolution. We constructed a model of radiocarbon cycling processes in lake ecosystem which evaluates the 14C specific activity vertical distribution in two organic sediment fractions: alkali-soluble and alkali-insoluble. Model calculations proved that during the first 15 years of operation since 1983, 14C annual aqueous releases from the INPP were in water dissolved inorganic carbon form and varied in the range of 2.4 ÷ 3.7 × 108 Bq/year. The results of the modeling of hypothetic scenarios also showed that there was the only one episode of elevated releases from the INPP in 2000–2001, which changed the interaction between the two organic sediment fractions for the period of 2000–2006. It was caused most probably by released chemicals from INPP but not by 14C contamination. Interaction processes between both sediment fractions recovered to its original state after 2006, indicating that the released additional chemical compounds lake ecosystem have been cleaned-up. View Full-Text
Keywords: lake sediments; alkali-soluble sediment organic fraction; alkali-insoluble sediment organic fraction; radiocarbon; nuclear power plant lake sediments; alkali-soluble sediment organic fraction; alkali-insoluble sediment organic fraction; radiocarbon; nuclear power plant
►▼ Show Figures 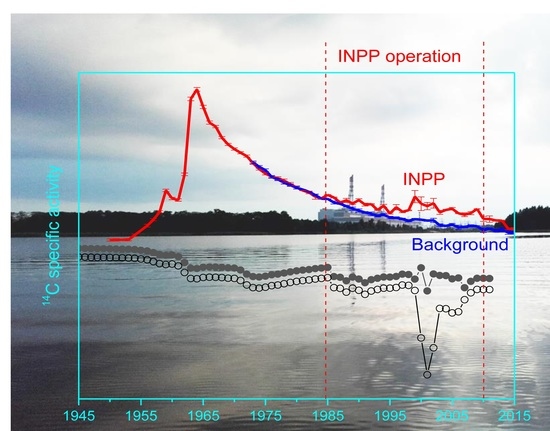