Status of Endemic Freshwater Fish Fauna Inhabiting Major Lakes of Turkey under the Threats of Climate Change and Anthropogenic Disturbances: A Review
Previous Article in Journal

Changes in Pelagic Fish Community Composition, Abundance, and Biomass along a Productivity Gradient in Subtropical Lakes

Disentangling the effects of climate change on nature is one of the main challenges facing ecologists nowadays. Warmer climates forces strong effects on lake biota for fish, leading to a reduction in size, changes in diet, more frequent reproduction, and stronger cascading effects. Space-for-time substitution studies (SFTS) are often used to unravel climate effects on lakes biota; however, results from continental lakes are potentially confounded by biogeographical and evolutionary differences, also leading to an overall higher fish species richness in warm lakes. Such differences may not be found in lakes on remote islands, where natural fish free lakes have been subjected to stocking only during the past few hundred years. We studied 20 species-poor lakes located in two remote island groups with contrasting climates, but similar seasonality: the Faroe Islands (cold; 6.5 ± 2.8 °C annual average (SD) and the Azores Islands (warm; 17.3 ± 2.9 °C)). As for mainland lakes, mean body size of fish in the warmer lakes were smaller overall, and phytoplankton per unit of phosphorus higher. The δ13C carbon range for basal organisms, and for the whole food web, appeared wider in colder lakes. In contrast to previous works in continental fresh waters, Layman metrics of the fish food web were similar between the two climatic regions. Our results from insular systems provide further evidence that ambient temperatures, at least partially, drive the changes in fish size structure and the cascading effects found along latitude gradients in lakes. View Full-Text
Keywords: stable isotopes; climate change; islands; space-for-time substitution stable isotopes; climate change; islands; space-for-time substitution
►▼ Show Figures 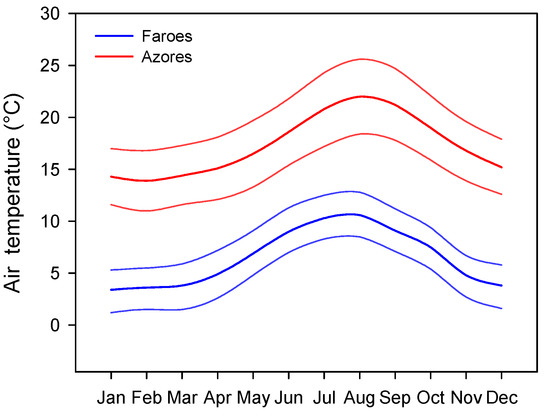