Earth Observations Based Assessment of Impact of COVID-19 Lockdown on Surface Water Quality of Buddha Nala, Punjab, India
Next Article in Special Issue

Streamflow Changes in the Headwater Area of Yellow River, NE Qinghai-Tibet Plateau during 1955–2040 and Their Implications
Previous Article in Special Issue

Changes in Water Environment in Erhai Lake and Its Influencing Factors

In recent years, the rapid development of the population, agriculture, and tourism around Erhai Lake has caused increasing environmental problems, which have seriously affected the ecological status of the lake. This study analyzed changes in water volume and quality in Erhai Lake, based on statistical data from 2000 to 2019, combined with climate, land-use type, and socioeconomic data, as well as the influencing factors of water environmental changes in the Erhai Lake basin. The main conclusions include: the water storage of Erhai Lake increased by 3.8 × 106 m3 year−1, from 2000 to 2019. The monthly variation in water volume showed a trend of first decreasing and then increasing, in which it increased from August to December and decreased from January to July. The change in water volume was mainly affected by climate factors. From 2000 to 2019, the nitrogen concentration in Erhai Lake showed an increasing trend, and the changes in water quality were closely related to human activities. In the northern part of the basin, agricultural nonpoint source pollution was the main factor affecting water quality, while in the southern part of the basin, economic development, accelerated urbanization, and tourism were the main factors affecting water quality. View Full-Text
Keywords: climate; human activities; water environment; Erhai Lake climate; human activities; water environment; Erhai Lake
►▼ Show Figures 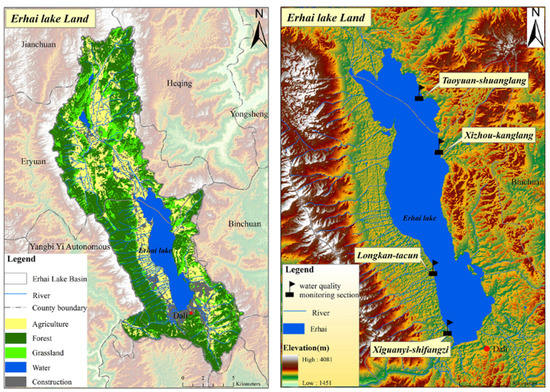