Background: Although functional bacteria are widely used in aquaculture water treatment, whether they affect the indigenous microbiota and whether the impact is persistent remain unclear. Therefore, we aimed to explore the denitrification effect of Pseudomonas furukawaii ZS1 isolated from a grass carp culture pond in nitrogen-rich aquaculture water, and determine whether its effect on the microbiota structure of the aquaculture water was persistent. Methods: Three each of treatment and control groups were set up, and P. furukawaii ZS1 was added to the treatment group. The concentrations of ammonia nitrogen, nitrite, and nitrate, and the pH of each sample were measured for eight consecutive days. Changes of microbiota composition in the water were analysed via high-throughput sequencing. Results: Ammonia, nitrite, and nitrate concentrations were substantially lower in the treatment group than in the control group. There were significant differences in the microbiota structure between treatment and control groups, especially on days 2–7 after adding P. furukawaii ZS1. Furthermore, significantly enriched bacterial genera in the treatment group were initially higher in number than inhibited genera, but subsequently reverted to being lower in number. Conclusions: These results provide theoretical guidance for the effective use of P. furukawaii ZS1 to control aquaculture water. View Full-Text
Keywords: pond microbiota; Pseudomonas furukawaii; nitrogen cycle; grass carp culture; high-throughput sequencing; aquaculture pond microbiota; Pseudomonas furukawaii; nitrogen cycle; grass carp culture; high-throughput sequencing; aquaculture
►▼ Show Figures 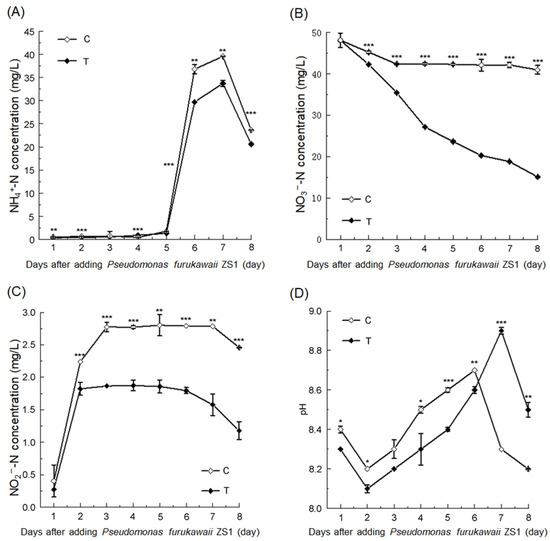