Variation Characteristics of Stable Isotopes in Precipitation and Response to Regional Climate Conditions during Pre-monsoon, Monsoon and Post-monsoon Periods in the Tianshui Area
Previous Article in Special Issue

The partitioning of metals and metalloids between their dissolved and suspended forms in river systems largely governs their mobility and bioavailability. However, most of the existing knowledge about catchment-scale metal partitioning in river systems is based on a limited number of observation points, which is not sufficient to characterize the complexity of large river systems. Here we present an extensive field-based dataset, composed of multi-year data from over 100 monitoring locations distributed over the large, transboundary Selenga River basin (of Russia and Mongolia), sampled during different hydrological seasons. The aim is to investigate on the basin scale, the influence of different hydroclimatic conditions on metal partitioning and transport. Our results showed that the investigated metals exhibited a wide range of different behaviors. Some metals were mostly found in the dissolved form (84–96% of Mo, U, B, and Sb on an average), whereas many others predominantly existed in suspension (66–87% of Al, Fe, Mn, Pb, Co, and Bi). Nevertheless, our results also showed a consistently increasing share of metals in dissolved form as the metals were transported to the downstream parts of the basin, closer to the Lake Baikal. Under high discharge conditions (including floods), metal transport by suspended particulate matter was significantly greater (about 2–6 times). However, since high and low water conditions could prevail simultaneously at a given point of time within the large river basin, e.g., as a result of on-going flood propagation, snap-shot observations of metal partitioning demonstrated contrasting patterns with domination of both particulate and dissolved phases in different parts of the basin. Such heterogeneity of metal partitioning is likely to be found in many large river systems. These results point out the importance of looking into different hydroclimatic conditions across space and time, both for management purposes and contaminant modeling efforts at the basin scale. View Full-Text
Keywords: metal partitioning; the Selenga River basin; Lake Baikal; water pollution; aquatic geochemistry metal partitioning; the Selenga River basin; Lake Baikal; water pollution; aquatic geochemistry
►▼ Show Figures 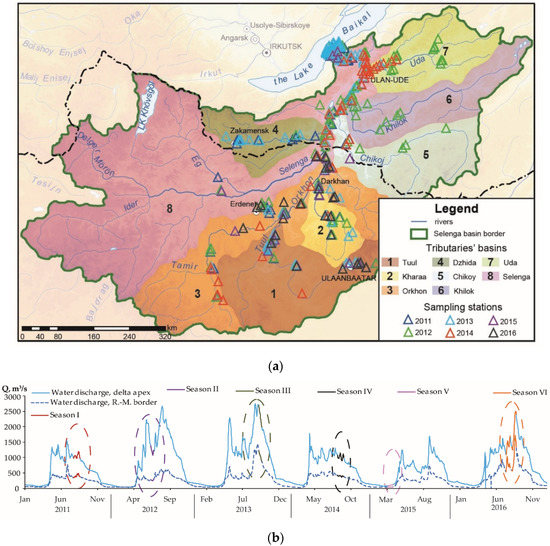