The Role of Snowmelt on the Spatio-Temporal Variability of Spring Recharge in a Dolomitic Mountain Group, Italian Alps

Springs play a key role in the hydrology of mountain catchments and their water supply has a considerable impact on regional livelihood, biodiversity, tourism, and power generation. However, there is still limited knowledge of how rain and snow contribute to the recharge of Alpine springs. This study presents a four-year investigation of stable isotopes in precipitation and spring water at the scale of a 240 km2 wide dolomitic massif (Dolomites, Italian Alps) with the aim of determining the proportions of snowmelt and rain in spring water and to provide insights on the variability of these contributions in space and time. Four precipitation sampling devices were installed along a strong elevation gradient (from 725 to 2660 m a.s.l.) and nine major springs were monitored seasonally. The monitoring period comprised three extreme weather conditions, i.e., an exceptional snowpack melting period following the highest snowfall in 30 years, an intense precipitation event (386.4 mm of rain in 48 h), and one of the driest periods ever observed in the region. Isotope-based mixing analysis revealed that rain and snowmelt contributions to spring water were noticeably variable, with two main recharge time windows: a late spring–summer snowmelt recharge period with an average snowmelt fraction in spring water up to 94 ± 9%, and a late autumn–early winter period with a rain fraction in spring water up to 68 ± 17%. Overall, during the monitoring period, snowmelt produced high-flow conditions and sustained baseflow more than rain. We argue that the seasonal variability of the snowmelt and rain fractions during the monitoring period reflects the relatively rapid and climate-dependent storage processes occurring in the aquifer. Our results also showed that snowmelt fractions in spring water vary in space around the mountain group as a function of the elevation of their recharge areas. High-altitude recharge areas, above 2500 m a.s.l., are characterized by a predominance of the snowmelt fraction (72% ± 29%) over the rain contribution. Recharge altitudes of approximately 2400 m a.s.l. also show a snow predominance (65 ± 31%), while springs recharged below 2000 m a.s.l. are recharged mostly from rain (snowmelt fraction of 46 ± 26%). Results from this study may be used to develop more accurate water management strategies in mountain catchments and to cope with future climate-change predictions that indicate a decline in the snow volume and duration in Alpine regions. View Full-Text
Keywords: springs; recharge; isotopes; snowmelt; aquifer; mixing model; Dolomites springs; recharge; isotopes; snowmelt; aquifer; mixing model; Dolomites
►▼ Show Figures 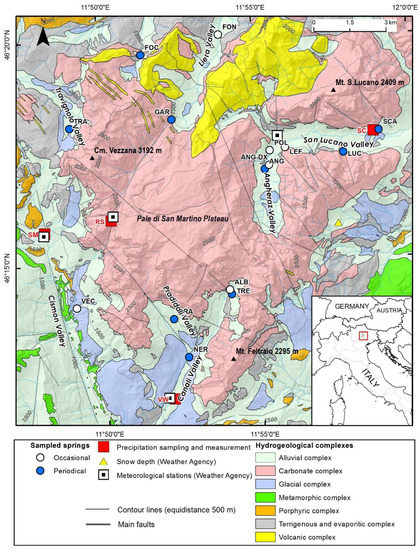