Effects of Additional Carbon Sources in the Biodegradation of 1,4-Dioxane by a Mixed Culture

A sludge was taken from a textile wastewater treatment plant that has been known to discharge 1,4-dioxane for years. The sludge was cultured at room temperature in basic salt media (BSM) containing 3240 mg/L K2HPO4, 1000 mg/L NaH2PO4·H20, 2000 mg/L NH4Cl, 200 mg/L MgSO4·H2O, 12.6 mg/L FeSO4·H2O, 3 mg/L MnSO4, 3 mg/L ZnSO4·7H2O, and 1 mg/L CoCl2·6H2O. Two hundred milligrams per liter of 1,4-dioxane was added as a sole carbon source, and the biodegradation of 1,4-dioxane was monitored by measuring the soluble chemical oxygen demand (COD) of the culture. Once the soluble COD was depleted, a small portion of the culture was seeded into a fresh BSM solution with 50 mg/L of 1,4-dioxane and the process was repeated several times.

Fifty-milliliter solutions of varying concentrations of 1,4-dioxane were prepared in a series of 100 mL flasks and inoculated with 10 mL of the seed culture, which was enriched in BSM, and the flasks were incubated in a shaking incubator at 25 °C. At times, small samples were taken from each flask and analyzed for 1,4-dioxane after filtration by a 0.22 μm syringe filter. To determine the yield coefficient, the cell growth was also assessed by measuring mixed liquor volatile suspended solids (MLVSS) according to a standard method [41]. For all biodegradation experiments, the seed culture was initially incubated in a rotary shaker in 1000 mg/L of 1,4-dioxane until it reached the exponential growth phase to avoid any lag phase or adaptation period in the early phase of biodegradation. Then, the culture was washed twice by centrifugation with sterile BSM and re-suspended before it was used for inoculation.
Based on the Monod equation, the degradation rate of 1,4-dioxane in a batch reactor can be expressed as Equation (1) [42], assuming the effect of cell decay is negligible: where Ks is the half saturation constant, qmax is the maximum specific substrate utilization rate, Y is the cell yield, Xa0 is the initial biomass concentration, and S0 and S represent 1,4-dioxane concentration initially and at time t, respectively. The integrated form of the equation is given as:
When kinetic coefficients were estimated, the biodegradation of 1,4-dioxane with different biomass concentrations was determined to compare with the Monod equation.

2.3. Effects of the Presence of Other Carbon Sources on 1,4-Dioxane Biodegradation

Prior to the biodegradation experiments, the wastewaters from which the 1,4-dioxane-degrading mixed consortium was obtained were analyzed using GC/MS to identify any potentially inhibiting compounds other than 1,4-dioxane. Two cyclic ethers, 2-methyl-1,3-dioxolane and 1,4-dioxene, were confirmed to be present in the wastewater. Figure 1 shows the schematic diagram and hydraulic retention time (HRT) of textile wastewater treatment. The characteristics of the textile wastewater were summarized in Table 1.
The biodegradation of 1,4-dioxane in batch flasks was determined in the presence of other carbon sources such as dextrose, THF, 2-methyl-1,3-dioxolane, and 1,4-dioxene. A series of 100 mL flasks containing 50 mL BSM, 1,4-dioxane, and other carbon sources was inoculated with the seed culture. Three duplicated flasks containing 1,4-dioxane with 20, 75, and 150 mg/L of THF were used to evaluate the influence of THF. In addition, 20, 100, and 500 mg/L of glucose were added to the three flasks to investigate the effect of easily degradable organic compounds on 1,4-dioxane degradation. The flasks were incubated in rotary shaker until the late exponential growth phase, at which time the cells were harvested, washed by centrifugation (5000 rpm, 5 min, 20 °C) with sterile BSM, and re-suspended in sterile BSM to obtain optical densities at 600 nm (OD600) of 0.01–1.5. The flasks with 75 and 150 mg/L of THF as a sole carbon source were also investigated for comparison. The solutions of 200, 600, and 1000 mg/L were used for 2-methyl-1,3-dioxolane and 200 mg/L was used for 1,4-dioxene. The test was done in duplicate with biotic and abiotic controls.

The concentration of 1,4-dioxane during incubation was measured by a Agilent 6890 gas chromatograph (Hewlett–Packard Company, Wilmington, NC, USA) equipped with a 5973 mass spectrometer with a HP-5MS (30 m × 0.25 mm I.D. × 0.25 μm) fused-silica capillary column using a following liquid–liquid extraction (LLE). Ten milliliters of the filtered liquid sample was added to the 100 mL separation funnel and extracted twice by 5 mL of methyl chloride for 5 min. After passing through the sulfuric anhydride trap to remove water, 2 mL of the methylene chloride extract was used for the analysis. The column temperature program was set at 100 °C hold for 1 min, 15 °C/min to 160 °C, and 5 °C/min to 300 °C hold for 7 min. The GC injector was held isothermally at 280 °C with a splitless period of 3 min. Helium (99.999%, flow of 1 mL/min) was used as a carrier gas at a flow rate of 1 mL/min using electronic pressure control. Soluble COD was also measured to double-check the 1,4-dioxane data using a DR/2010 Portable Data Logging Spectrophotometer (HACH, Loveland, CO, USA). The concentration of bacteria was measured as MLVSS.

The half saturation constant (Ks) and the maximum specific substrate utilization rate (qmax) were determined by fitting Equation (2) to batch experimental data with the varying initial 1,4-dioxane concentrations using MATLAB software (The Math Works, Inc., Natick, MA, USA). The effect of cell decay was minimized by using a relatively high concentration of biomass for the experiments. The yield coefficient was estimated by measuring the total suspended solids (TSS) concentration of batch incubations containing 200 mg/L 1,4-dioxane. The values for Ks, qmax, and Y are 7.47 mg/L, 0.0051 h−1, and 0.434 mg/mg-VSS, respectively.
The biodegradation of 1,4-dioxane at varying concentrations of biomass was determined in batch experiments, and the results are shown in Figure 2. The degradation of 1,4-dioxane is well-described by the model based on the Monod equation.

3.3. The Effects of Structural Analogs

To study the biological treatability of 1,4-dioxane-containing wastewater, the effects of coexisting carbon sources such as easily degradable organics and structural analogs on 1,4-dioxane biodegradation were determined using a mixed culture enriched for 1,4-dioxane. The biodegradation of 1,4-dioxane was not affected by the presence of dextrose, indicating no substrate competitiveness on the specific enzymes involved in 1,4-dioxane biodegradation. On the other hand, competitive inhibition was observed with THF, 2-methyl-1,3-dioxolane, and 1,4-dioxene, showing almost complete inhibition when the concentrations of the compounds were relatively high. All three compounds appeared to have much higher affinity over 1,4-dioxane for the enzymes acting on the rate-limiting step of 1,4-dioxane biodegradation. The inhibiting effects were also confirmed from the biodegradation experiments with the raw wastewater from a textile manufacturer containing a relatively high concentration of 2-methyl-1,3-dioxolane. It is likely that a much longer retention time is required for the proper treatment of 1,4-dioxane when these structural analogs are present in the wastewater. When treating 1,4-dioxane-containing wastewater, the presence and levels of other cyclic ethers and their inhibitory effects should be carefully estimated and reflected in the design of treatment systems.

This work was supported by Korea Environment Industry & Technology Institute (KEITI) through the Public Technology Program based on Environmental Policy, funded by the Korea Ministry of Environment (MOE) (2018000700001). 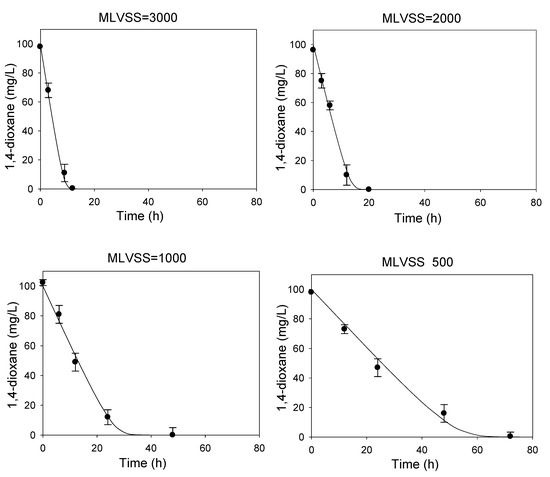 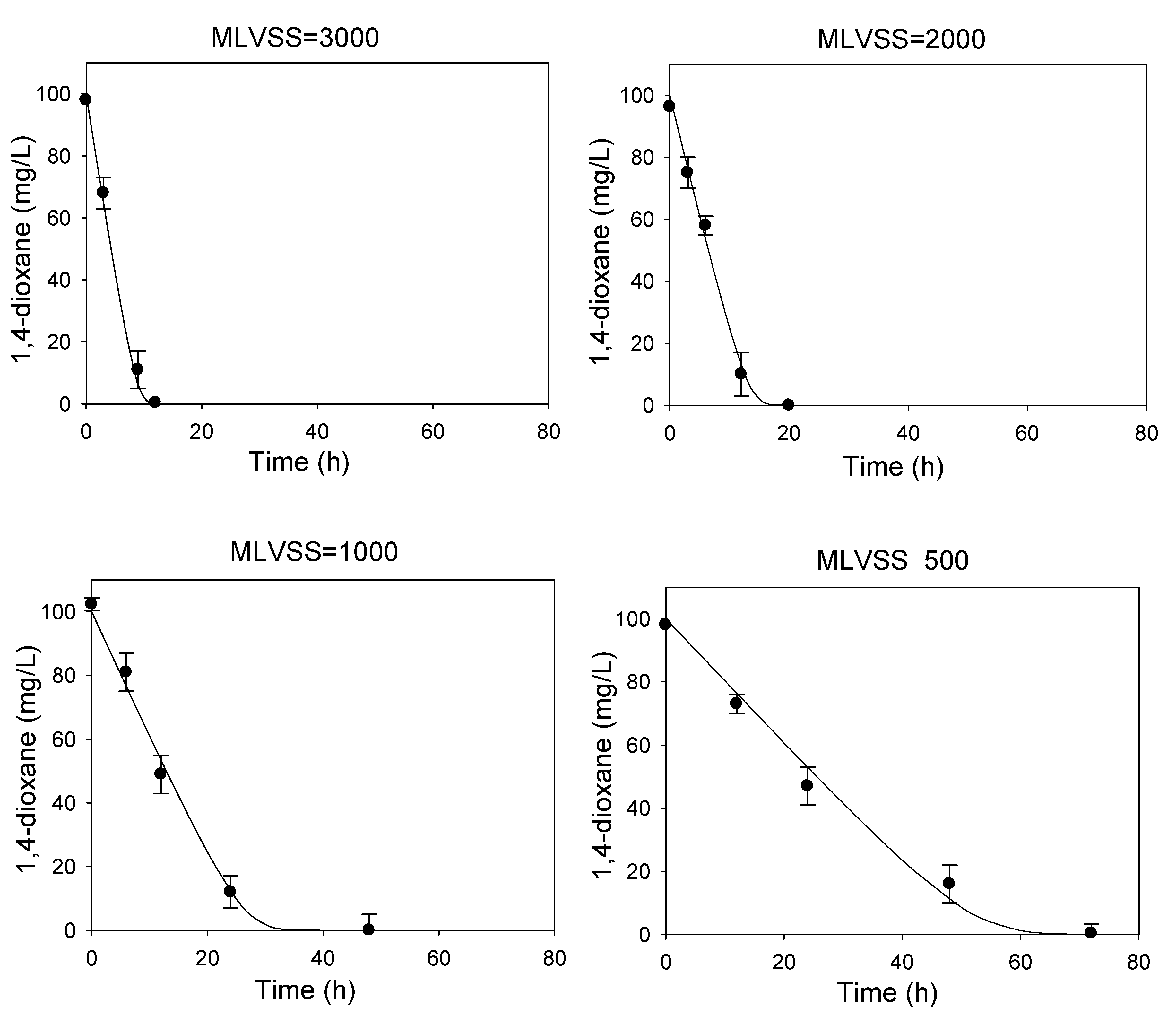 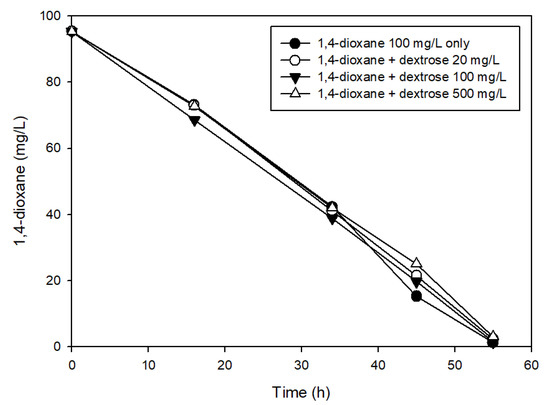 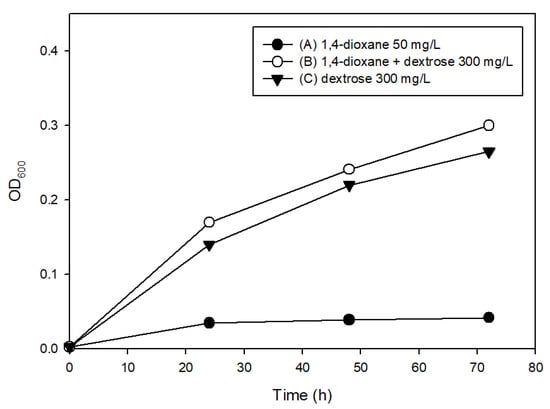 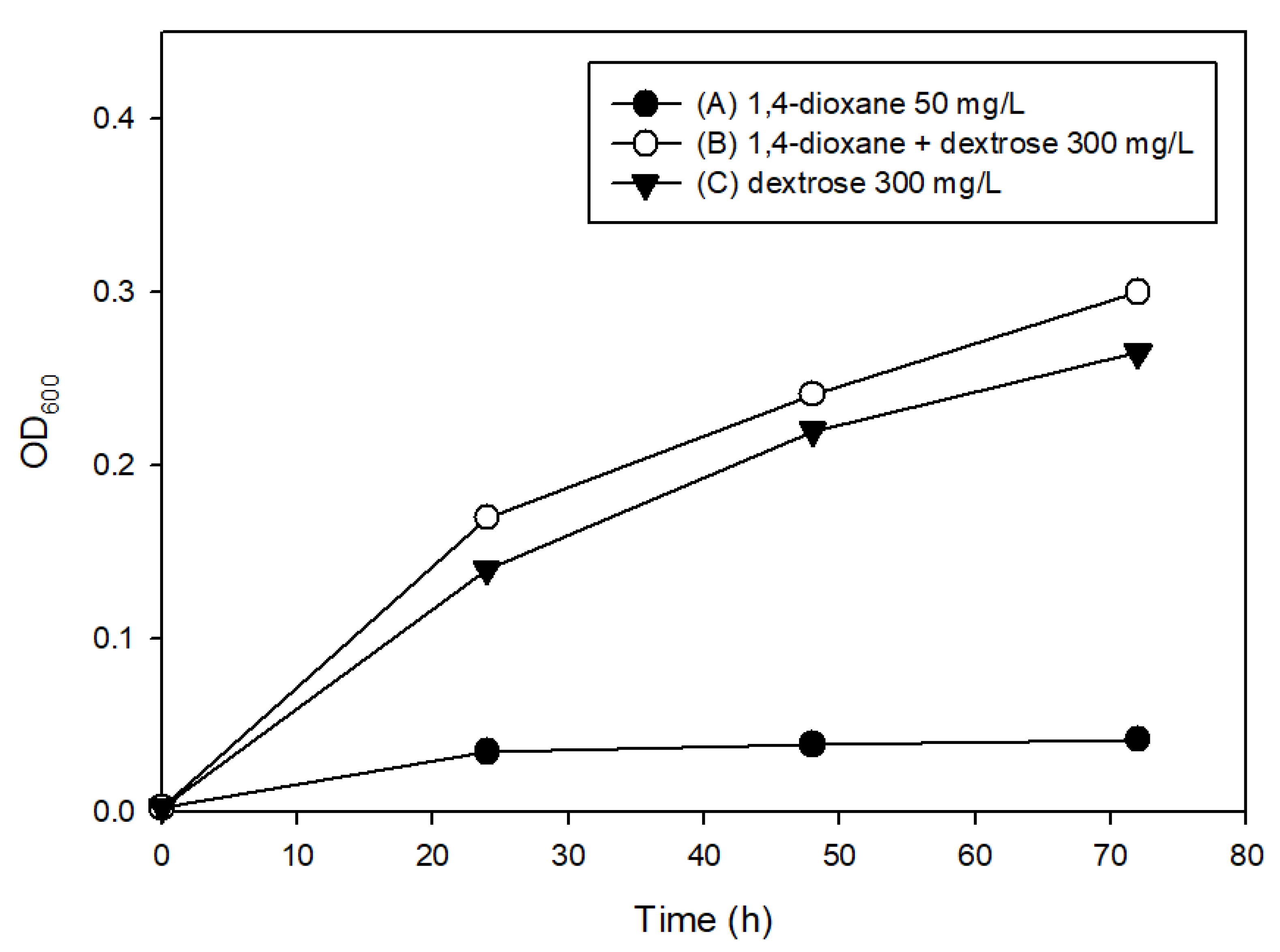 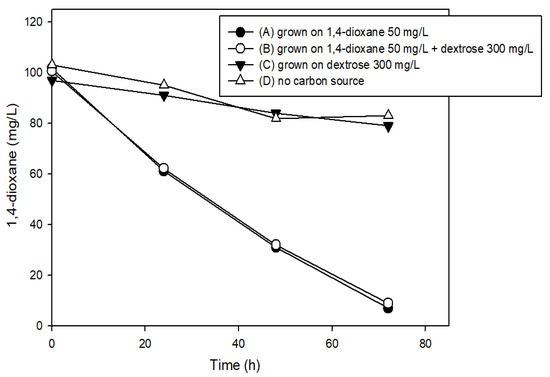 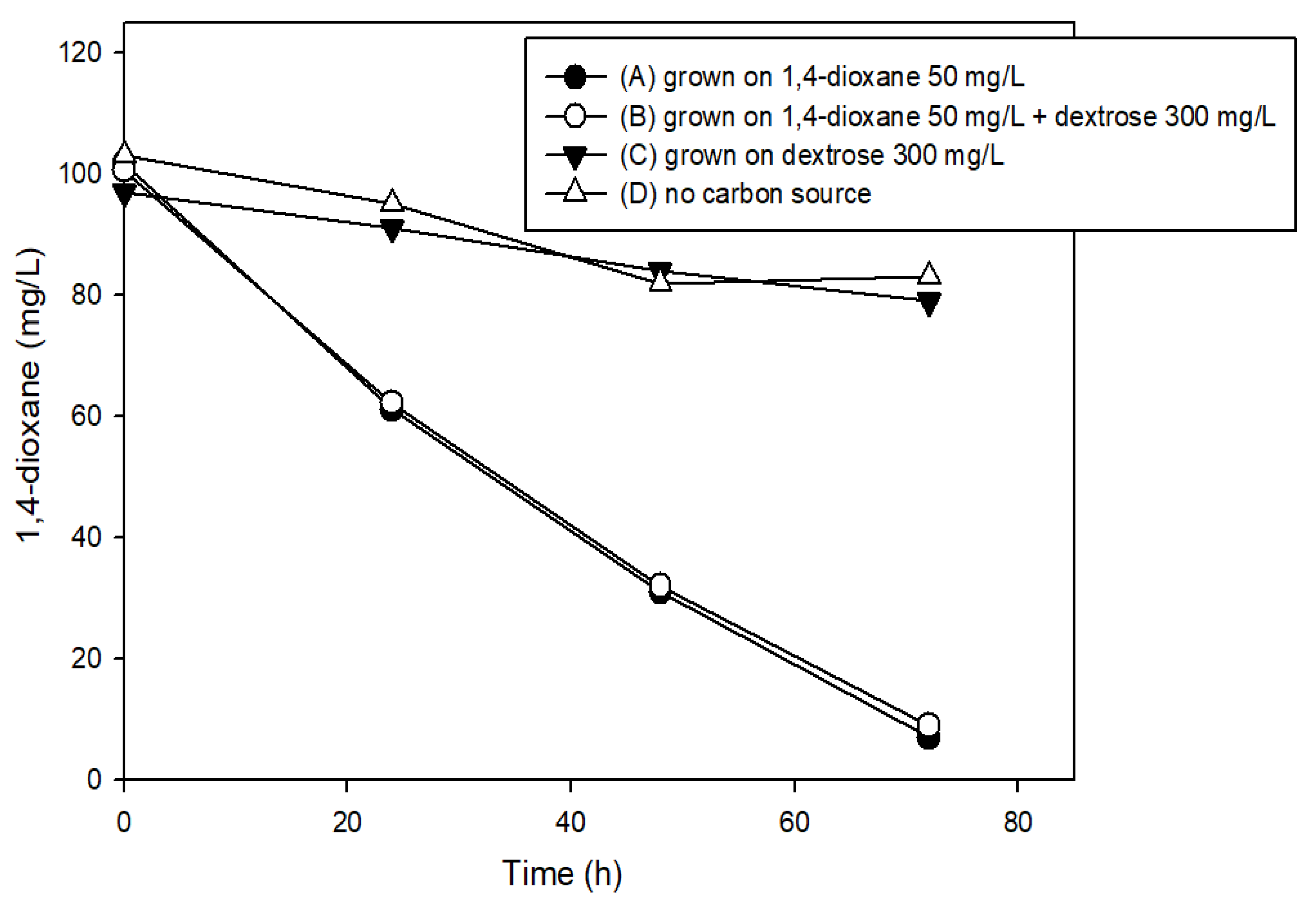 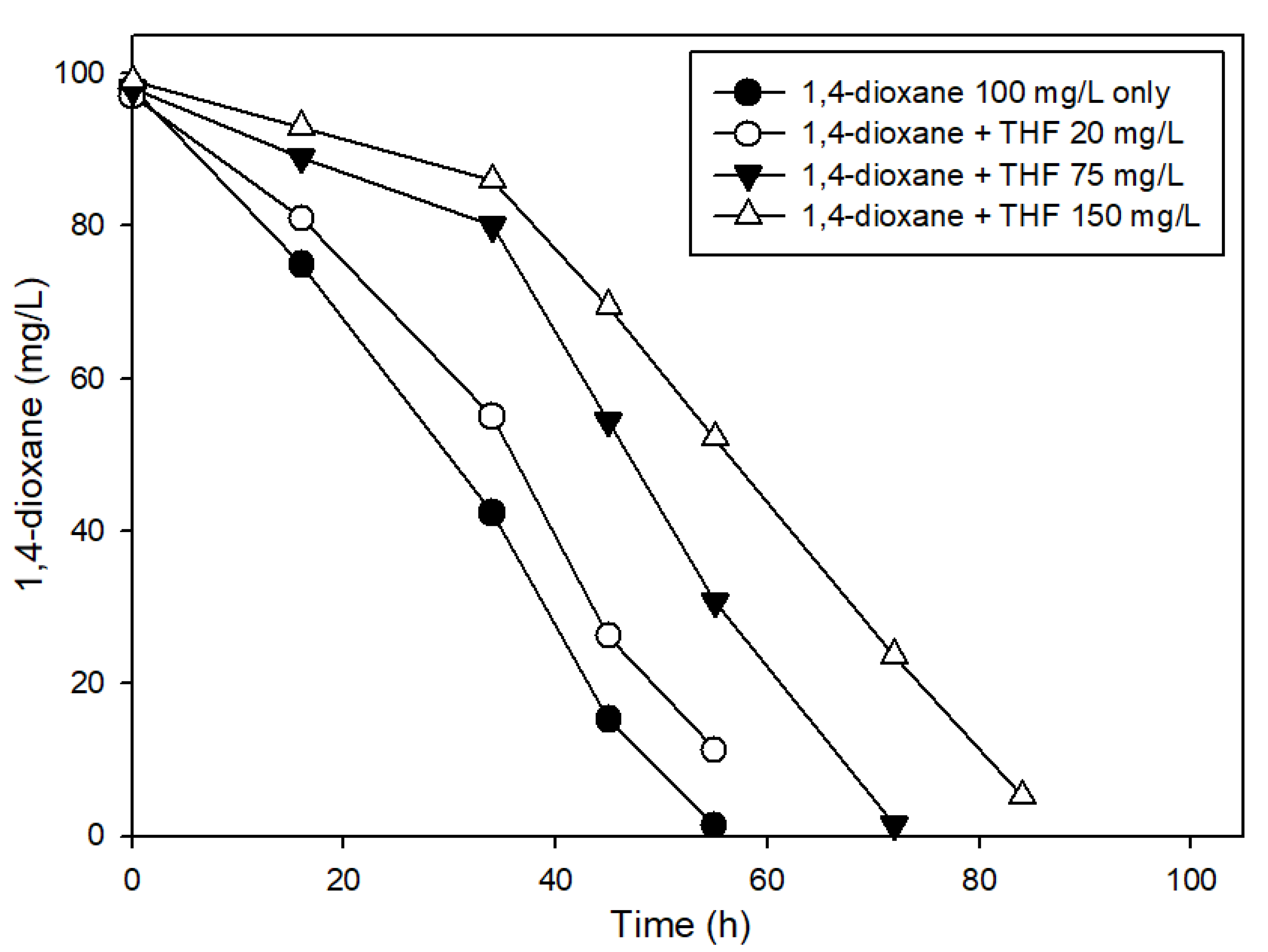 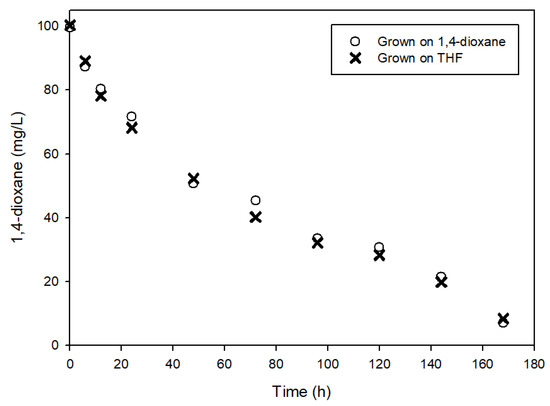 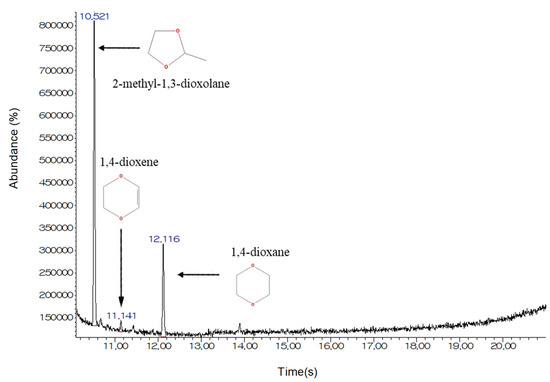 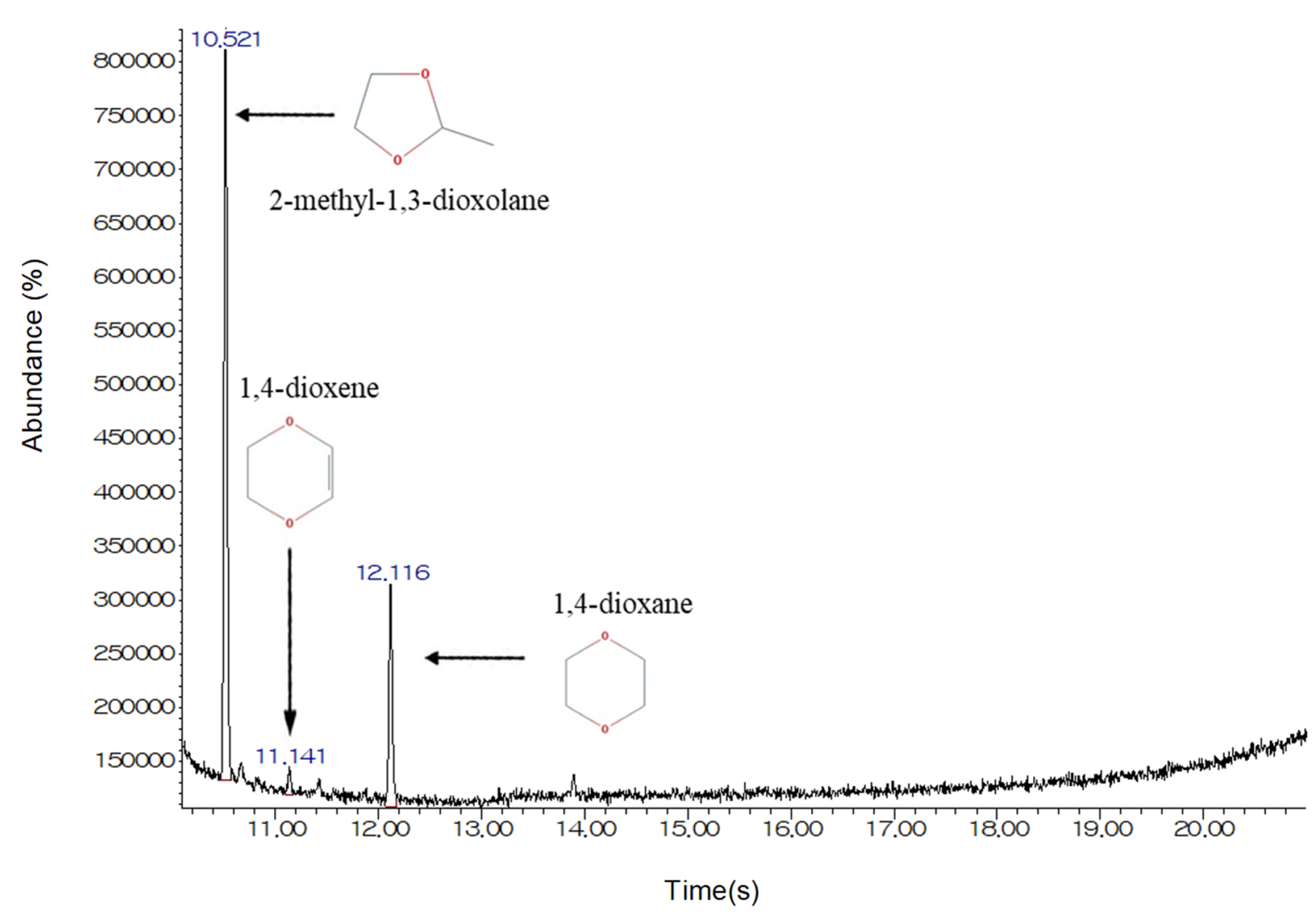 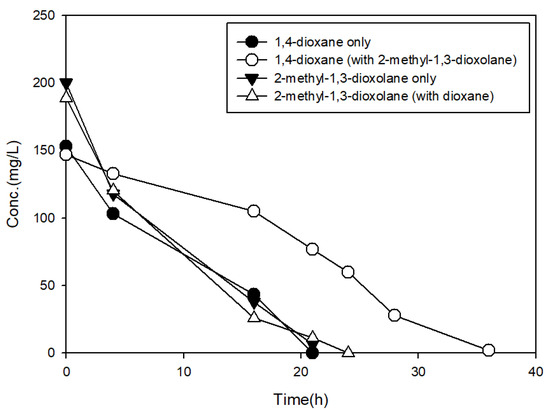 Table 1. The characteristics of the textile wastewater.
Table 1. The characteristics of the textile wastewater.
© 2020 by the authors. Licensee MDPI, Basel, Switzerland. This article is an open access article distributed under the terms and conditions of the Creative Commons Attribution (CC BY) license (http://creativecommons.org/licenses/by/4.0/).
We use cookies on our website to ensure you get the best experience. Read more about our cookies here.
Accept
We have just recently launched a new version of our website. Help us to further improve by taking part in this short 5 minute survey here. here.
Never show this again