Multipurpose Use of Artificial Channel Networks for Flood Risk Reduction: The Case of the Waterway Padova–Venice (Italy)
Next Article in Special Issue

δ18O and electrical conductivity (EC) were used successfully to trace the spatial distribution of whole-lake groundwater-lake exchange for a small (four ha) groundwater-fed lake situated in a low relief and low hydraulic gradient area. The method relies on quick sampling of shallow groundwater, direct analysis of EC in the field, and relatively in-expensive analysis of δ18O in the laboratory. Ternary uncertain end-member mixing analysis (precipitation, groundwater, and lake water) quantified the composition of water discharging to and recharging from the lake. The tracer distribution and mixing analysis were in agreement with the interpreted groundwater flow near the lake. The use of only one tracer (either δ18O or EC) gave the same results for the recharge segments, but the discharge segments changed the origin of the water from being groundwater to precipitation controlled. The two tracers complemented each other, especially with different signals in precipitation and groundwater. The uncertain end-members were assessed based on local (groundwater and lake water) and off-site (precipitation) data. The off-site data were found to be useful if it contained representative information on local-site seasonality (uncertainty, variance). Final end-member concentrations could explain the transience of the hydrology at the site (i.e., flooding of the area adjacent to the lake during periods with high precipitation, and variability of the δ18O signal in precipitation). This methodology potentially represents a new option to study groundwater-lake systems. The tracer information collected over only two days is useful by itself for developing the next steps like the quantification of fluxes based on other standard methods (Darcy approach, seepage meters, or temperature). The tracer information can provide quantitative estimation of inputs and outputs by using the mixing analysis. View Full-Text
Keywords: groundwater-lake exchange; tracers (δ18O and EC); mixing analysis with uncertain end-members groundwater-lake exchange; tracers (δ18O and EC); mixing analysis with uncertain end-members
►▼ Show Figures 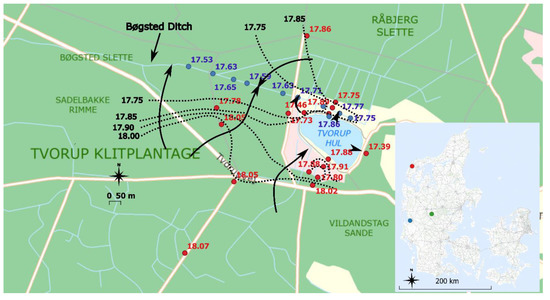