Irrigation of World Agricultural Lands: Evolution through the Millennia
Next Article in Special Issue

Runoff Changes from Urumqi Glacier No. 1 over the Past 60 Years, Eastern Tianshan, Central Asia

Glaciers are vital to water resources in the arid land of central Asia. Long-term runoff records in the glacierized area are particularly valuable in terms of evaluating glacier recession and water resource change on both a regional and global scale. The runoff records of streams draining basins with 46% current glacier cover, located at the Urumqi Glacier No. 1 in the source area of the Urumqi River in eastern Tianshan, central Asia, were examined for the purpose of assessing climatic and glacial influences on temporal patterns of streamflow for the period 1959–2018. Results suggest that runoff from the catchment correlates well with temperature and associated precipitation data. During the period 1993–2018, it increased by 114.39 × 104 m3, which was 1.7 times the average runoff during the period 1959–1992. A simple water balance model is introduced to calculate the different components of the runoff, including precipitation runoff from glacier surface and from nonglacial areas, glacier mass balance and glacial runoff. Thus, the long-term change of each component and its response to climate change are revealed. We found that the period 1997–2018 is likely to be the “peak water” (tipping point) of the glacial runoff resulting from shrinkage of glacier area. View Full-Text
Keywords: streamflow; glacial runoff; glacier mass balance; Tianshan; Urumqi Glacier No. 1 streamflow; glacial runoff; glacier mass balance; Tianshan; Urumqi Glacier No. 1
►▼ Show Figures 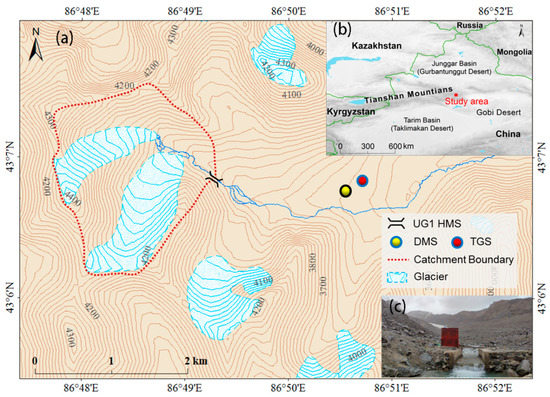