Capacity of Two Ornamental Species (Iris sibirica and Zantedeschia aethiopica) to Take up, Translocate, and Accumulate Carbamazepine under Hydroponic Conditions

Iris sibirica and Zantedeschia aethiopica are ornamental species that have previously been used in pilot-scale treatment wetlands (TWs) focused on the removal of carbamazepine (CBZ), in which good results were obtained; however, the plant influence was not completely determined. In addition, plant uptake has been reported to play a crucial role in CBZ removal in comparison to other mechanisms. Therefore, the aim of this study was to evaluate the capacity of I. sibirica and Z. aethiopica to take up, translocate, and accumulate CBZ in hydroponic conditions using a nutrient solution spiked with the drug. The maximum CBZ tolerance threshold for the two species was found to be 10 mg/L, which was used to carry out the uptake experiments. The results showed a better performance of I. sibirica compared to Z. aethiopica reaching 31.1% and 20.9% of removal efficiency, respectively. The parent compound accumulated mainly on the leaves of both species. Furthermore, a high proportion of the CBZ taken up by the plants (up to 70%) was metabolized by both species. The performance of the two species suggests the importance of plant harvesting in TWs in order to promote CBZ removal and indicates the need for future works. View Full-Text
Keywords: treatment wetlands; pharmaceuticals; Mexico; carbamazepine metabolization treatment wetlands; pharmaceuticals; Mexico; carbamazepine metabolization
►▼ Show Figures 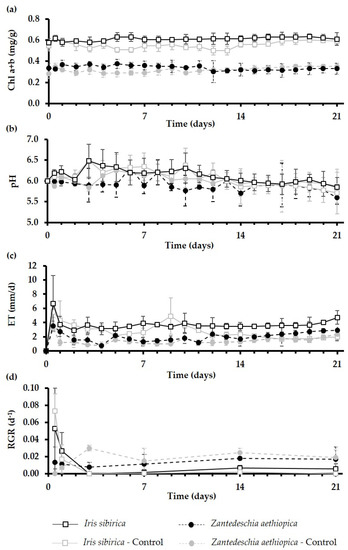