Impact of Combined Sewer Systems on the Quality of Urban Streams: Frequency and Duration of Elevated Micropollutant Concentrations

Watersheds are defined as a set of lands where water drainage occurs through rivers and their tributaries. A large quantity of water resources exist in the state of Maranhão, Brazil, where rivers and their basins must meet environmental quality standards defined by the limits set out in national environmental council (CONAMA) legislation 357/05 for physicochemical and microbiological parameters, including parasites. Multivariate statistical techniques were applied to study the temporal and spatial variations in water quality of a segment of the Pindaré River. The data set included nine parameters for three sampling points over eleven months. Principal component analysis grouped the monitored sampling points into four clusters and identified electrical conductivity, temperature, total dissolved solids (TDS), pH, salinity, and Escherichia coli as being associated with the dry season and nitrite, nitrate, and turbidity as being associated with the rainy season. Three principal components explained 83.80% of the data variance during the rainy and dry seasons. The evaluated correlations indicated that during the rainy season, nitrite (~0.18 mg L−1) and turbidity (~46.00 NTU) levels were the highest, but pH was at its lowest (~6.61). During the dry season, TDS (~155.00 mg L−1) and pH (~8.10) were highest, and E. coli bacteria was more abundant. View Full-Text
Keywords: fecal coliforms; parasites; principal component analysis; river; water quality fecal coliforms; parasites; principal component analysis; river; water quality
►▼ Show Figures 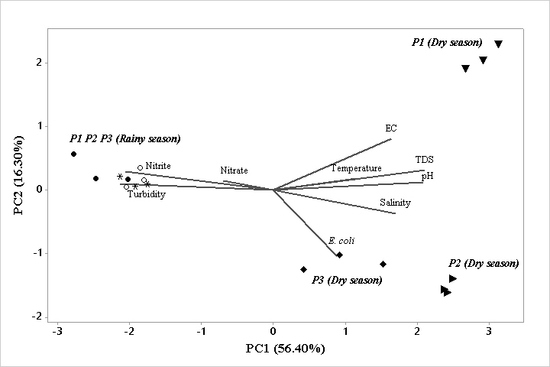