Two 3D hydrodynamic models, AEM3D and MIKE3, are compared in simulating hydrodynamics of the Maroon Reservoir in southwest Iran. The reservoir has a complex bathymetry with steep walls, which makes it a good case for studying the performance of hydrodynamic models. The models were compared together and with measured water temperatures from different locations of the reservoir in a five-month period between December 2011 and April 2012. The results indicated that the AEM3D model, which uses a finite difference scheme with a purely z-level vertical discretization, showed better consistency with observations so that the AME and RMSE of the model remain below 1 °C. The MIKE3 model showed overall higher errors from 56% to 130% larger than AEM3D and the level of error strongly depends on its vertical discretization method and the turbulence model. The lowest errors by MIKE3 were seen by the k-ε turbulence model with a hybrid z-sigma discretization, while the highest errors were generated by using the sigma vertical discretization. The vertical mixing model in AEM3D model, used instead of the constant eddy viscosity or k-ε formulation, showed a better performance in modeling vertical mixing and wind mixed layer, which is another reason of observing better results by this model than MIKE3. Overall, this study shows AEM3D as a more appropriate model for simulating deep and complex reservoirs with steep slopes and walls. View Full-Text
Keywords: Maroon Reservoir; AEM3D; MIKE3; hydrodynamic modeling; model intercomparison Maroon Reservoir; AEM3D; MIKE3; hydrodynamic modeling; model intercomparison
►▼ Show Figures 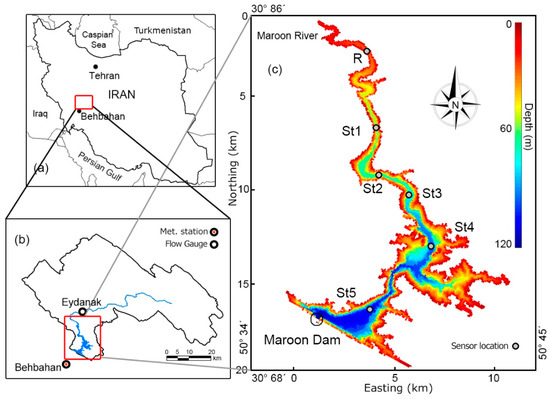