Analysis of Temporal-Spatial Variation Characteristics of Drought: A Case Study from Xinjiang, China

Numerical Simulation of Seepage and Stability of Tailings Dams: A Case Study in Lixi, China

:
The purpose of establishing a tailings dam is to safely store tailings to protect the natural environment from damage. Accidents at tailings dams are frequent, however, with serious consequences of not only threats to life and property but also the pollution of the environment. Many tailings dam accidents are caused by seepage failure. In this paper, the object of the case study is the Lixi tailings dam. Three- and two-dimensional finite element models are established. The seepage field of the project under different working conditions is simulated and the position of the phreatic line is obtained. The safety factors under different working conditions are obtained by combining the seepage field with the stable surface. Finally, the influence of different dry and upstream slope ratio on seepage and stability of tailings dam is obtained. The results show that the longer the length of the dry beach, the lower the phreatic line and the greater the safety factor. The higher the upstream slope ratio, the lower the phreatic line and the greater the safety factor.
Keywords:
tailings dam; seepage; stability; numerical simulation

The Lixi tailings dam is located east of the Qinling Mountains in Lixi ravine, Jindui town, Huaxian county, Shanxi province (Figure 1). The dam was designed by the Beijing Nonferrous Metallurgy Design and Research Institute in 1973 and construction was started by the 10th metallurgy construction company of the Ministry of Metallurgical Industry in 1977. Construction was completed and the dam was put into use in 1983. The dam is designed with a final stacking dam with an elevation of 1300 m, a total storage capacity of 165 million cubic meters, a total dam height of 164.5 m, and a service life of 32 years. Originally considered a second-class tailings pond (now a first-class tailings pond), the initial dam was built as a permeable dam made of rubble and was piled up with directional blasting. The dam crest elevation is 1176.5 m, the top length is 115.0 m, the top width is 4.0 m, and the top low width is 157.0 m. The dam is 40.5 m high. The upstream and downstream slope ratios of the long-term dam are 1:1.7 and 1:2.0, respectively. There is a 2.0 m horse trail 1156.0 m downstream and a 0.7 to 1.0 m reverse filter layer at the upstream end. The later dams are raised by the upstream stacking method. The sub-bats in each period are 3 m high, and the loader is used to ship the results. The tailings pipe is laid on the top of the sub-dam for decentralized ore discharge, and the tailings are deposited after natural classification to form a late-stage accumulation dam. The outer slope of the dam is stepped, and the designed total slope ratio is 1:5. It is covered with soil-bearing gravel and has a grid-like drainage ravine. The sectional view is shown in Figure 2. The layout of the project is shown in Figure 3.

In this study, ADINA was used to simulate the three-dimensional (3D) seepage field, and SEEP/W in the Geo-Studio software was used to simulate the seepage field of the two-dimensional (2D) maximum profile. The results were coupled using SLOPE/W software for the safety coefficient calculation.
The model was simplified in the process of modeling. When modeling in Geo-Studio, the dimensional parameters of the model are measured in CAD from Figure 1. In the X direction, the extension direction of the stack dam is divided and taken. The boundary between different materials of the dam is distinguished by a broken line. The materials at different locations of the dam are reduced to bedrock, tail silt and tail medium sand. The sub-dams at different elevations are simplified as a straight line from the initial dam to the dam top. The elevation of the foundation surface was 1120 m, and the elevation of the simulated thirty-fifth pile dam was 1330 m. The length of the simulation in the X direction of the model is 2000m. The curve is simplified to a straight line connected at different points. The resulting model is shown in Figure 4.
When modeling in ADIN, the modeling scope was designed to take into account the entire research area. In the dam body left and right bank (Y direction) extend outward 100m. At the upstream of the dam (X direction), the length of the dry bench is approximately equal to the length of the fill dam. For the convenience of modeling, take the number of its range as an integer. Therefore, the modeling range was selected as 2000m in the X direction and 1600m in the Y direction. The elevation of the foundation model at the starting point in the Z direction is 1100m. First, the terrain is divided into different sizes and these pieces are modeled. Then, the Boolean operation is used in ADINA. These pieces of bedrock are integrated into a complete foundation. The obtained foundation model is shown in Figure 5. It is then combined with Figure 2 and Figure 3. The 3D model had the same partitioning as the previous 2D one, and the pile dam was also divided into a bedrock layer, a tailings silt layer, and a tailings medium sand layer. Then, according to the stratification of different sections of the dam, the stratification is established. The rest of dam is modeled. Finally, through Boolean operation in ADINA, subtracting the overlapping part of foundation and dam body, the subtracted interface is the interface between dam body and surrounding bedrock. The 3d model of the tailings dam obtained using the Boolean operation is shown in Figure 6.
The material of the dam body was divided into three parts: tail silt, tail medium sand, and initial dam and bedrock. The material properties of the different parts are shown in Table 1.
The size and quantity of mesh are very important in finite element analysis. When the mesh generation is less, the calculated results cannot meet the requirement of accuracy. When the mesh generation is more, the computational workload is large and the time required for processing is long. Applying a tetrahedral element to the terrain gives it a strong adaptability. Therefore, we use a tetrahedron as a unit for subdivision. In order to meet the requirements of accuracy, the calculation is not very large. By trial and error, the length of each unit is selected to be 50 m. Mapped and Free-Form subsections are used. The model after grid generation is shown in Figure 7. The bedrock was divided into 90,742 units. The initial dam is divided into 387 units. The tailings silt layer was divided in to 9209 units. Tailings medium sand layer was divided in to 8211 units. 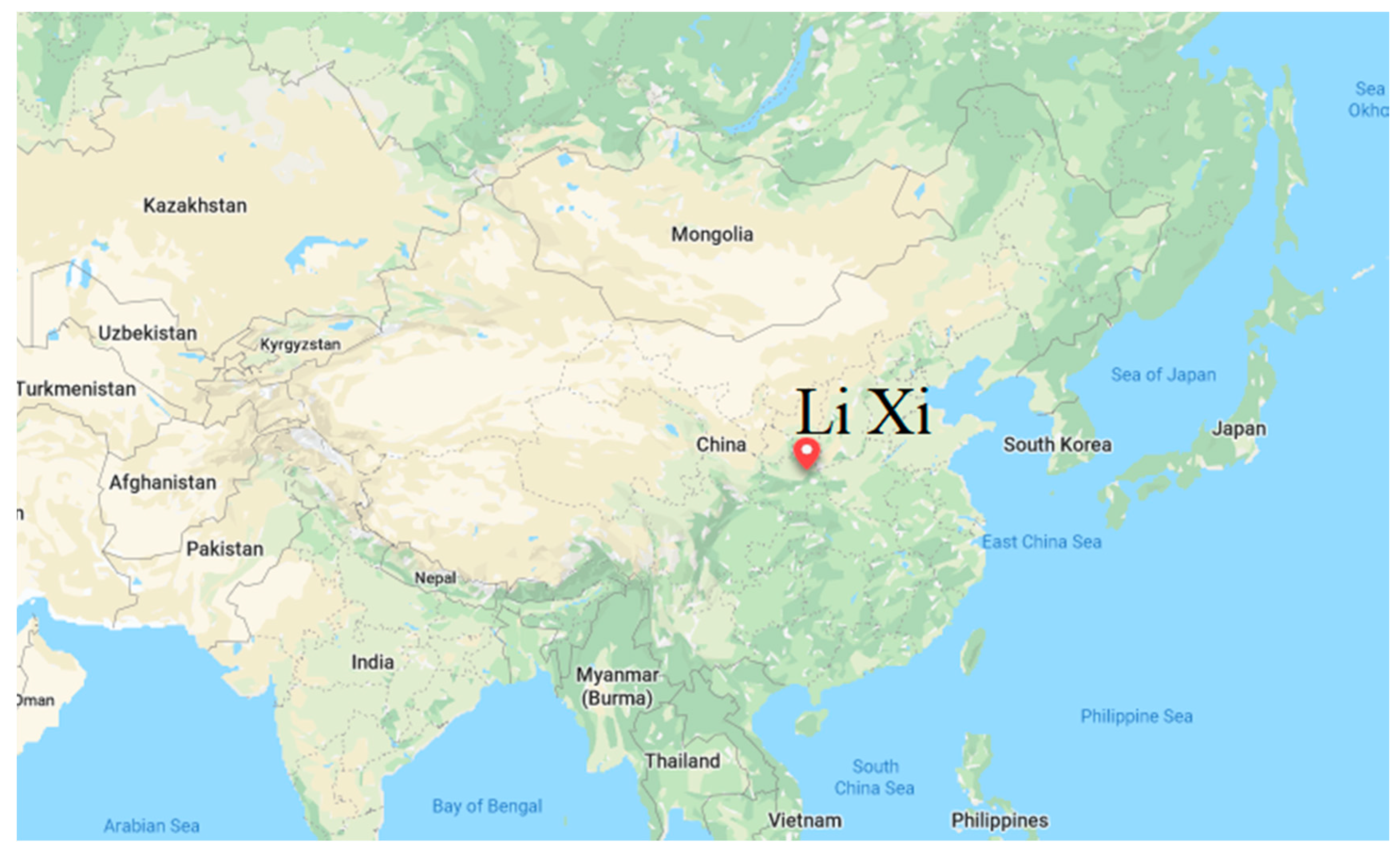 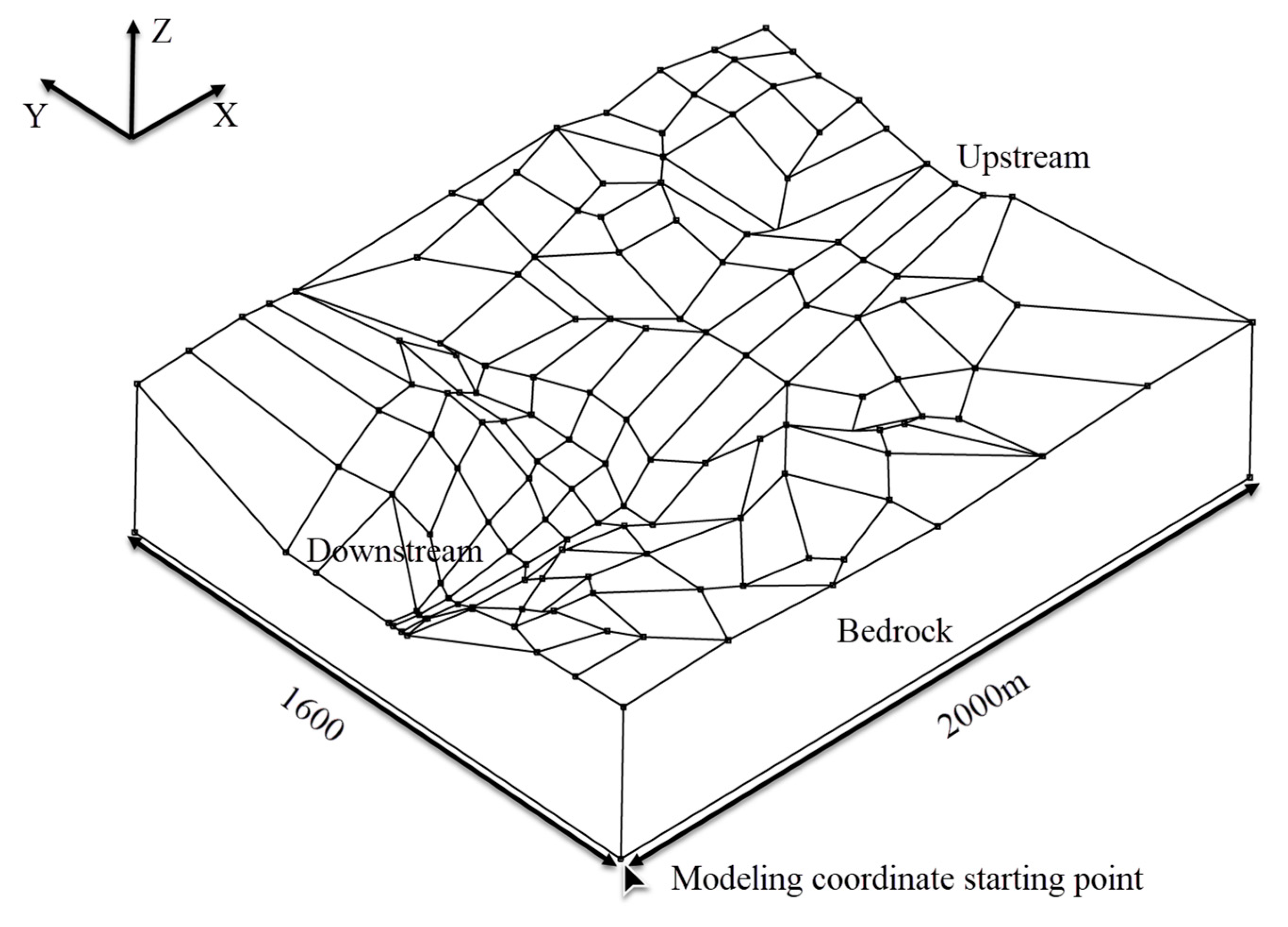 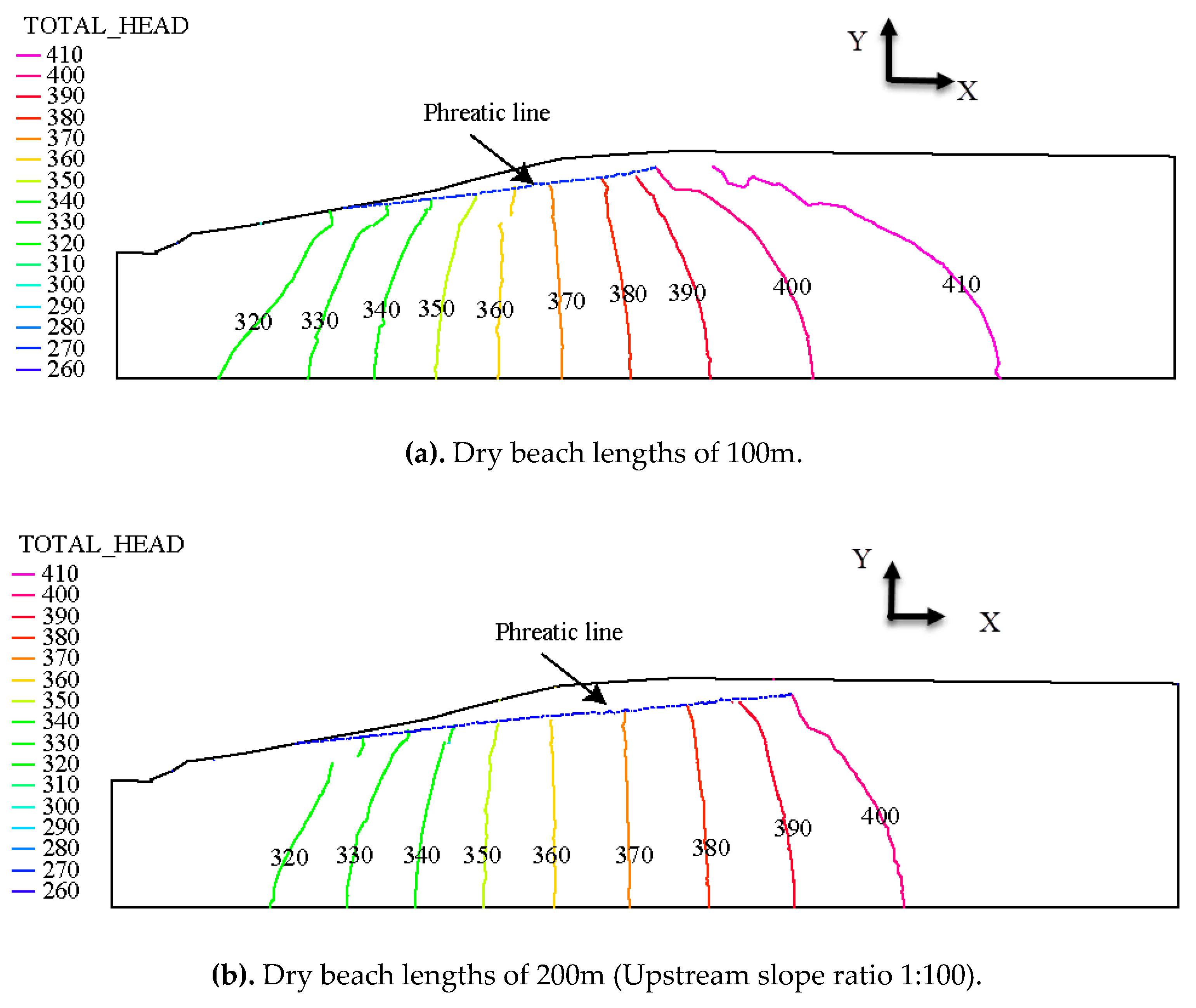 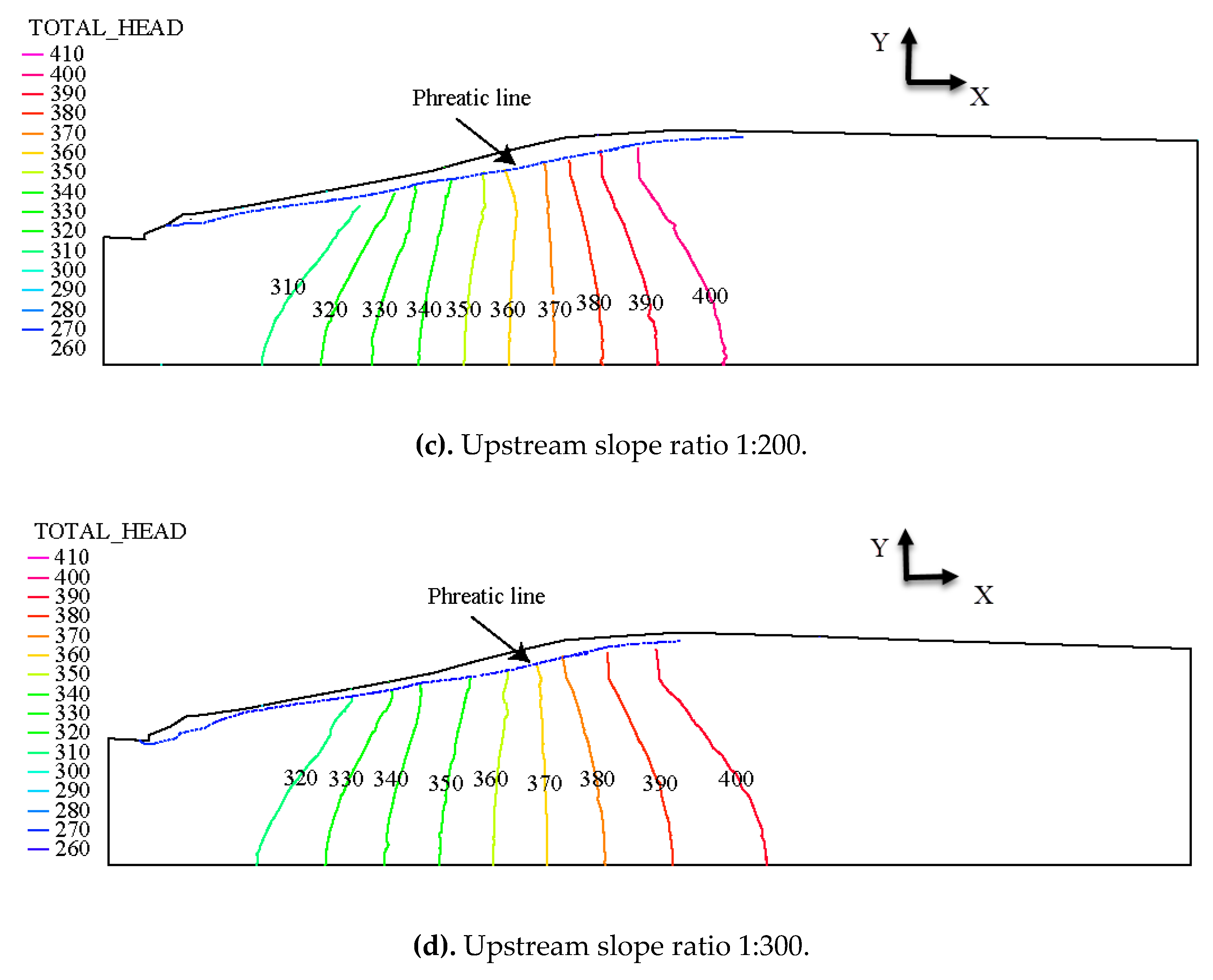 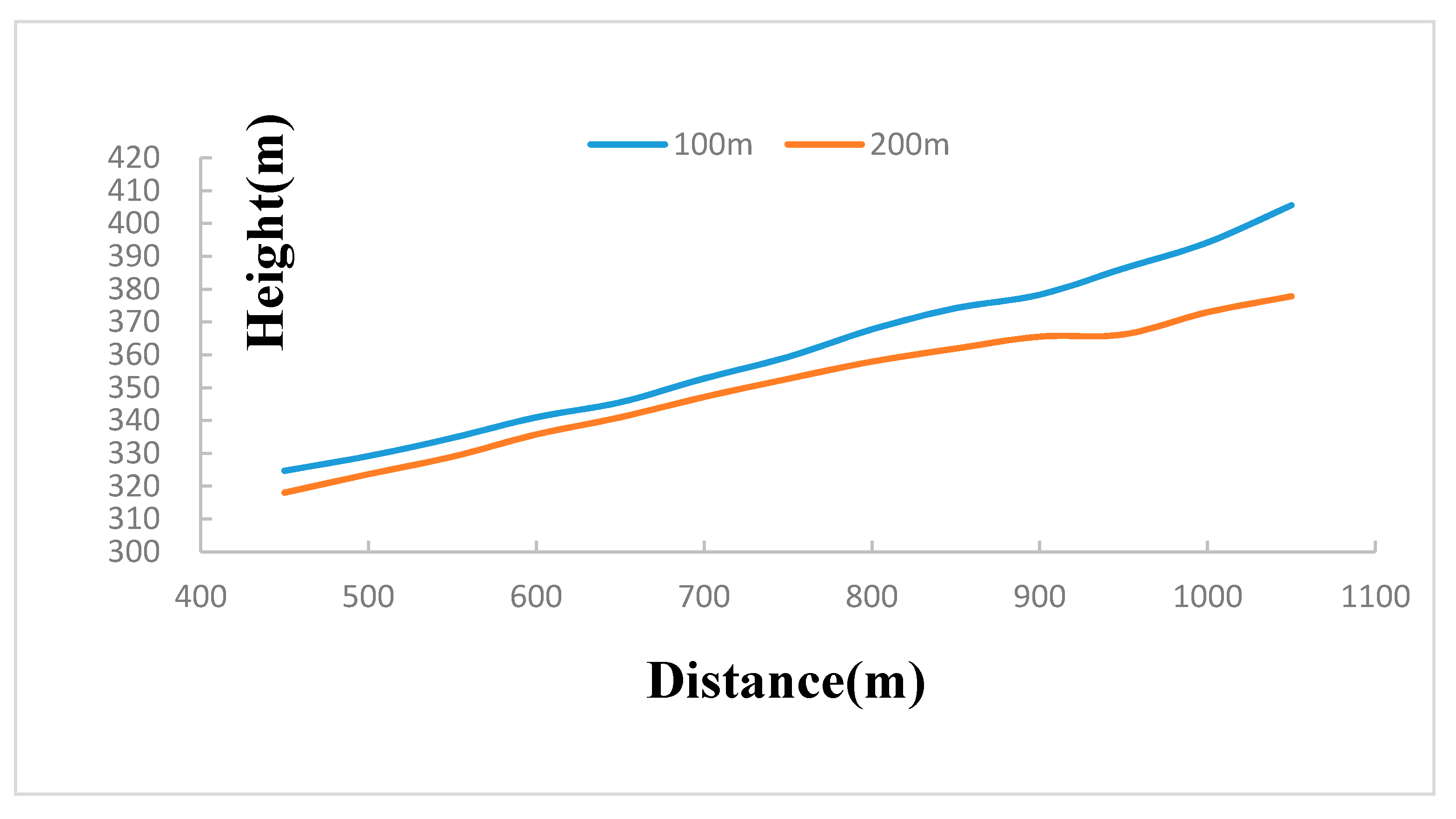