Impact of Sea Ice on the Hydrodynamics and Suspended Sediment Concentration in the Coastal Waters of Qinhuangdao, China

Marine Litter in Transitional Water Ecosystems: State of The Art Review Based on a Bibliometric Analysis

Transitional water ecosystems (TWEs), despite their ecological and economic importance, are largely affected by human pressures that could be responsible for significant inputs of litter in the marine environment. Plastic input in coastal ponds, lagoons, river deltas and estuaries, could be driven by a wide range of human activities such as agriculture, waste disposal, municipal and industrial wastewater effluents, aquaculture, fishing and touristic activities and urban impacts. However, it remains unknown what the impact of plastic input in these TWEs could have on natural capital and, therefore, the ability for an ecosystem to provide goods and services to human beings. Given the large interest with regards to the conservation of transitional water ecosystems and the clear exposure risk to plastic and microplastic pollution, this study aims to perform: (i) a bibliometric analyses on existing literature regarding the levels of marine litter in such environments; (ii) a selection among the available literature of homogeneous data; and (iii) statistical analyses to explore data variability. Results suggest that: (i) research on microplastics in these ecosystems did not begin to be published until 2013 for lagoons, 2014 for river mouths and 2019 for coastal ponds. The majority of articles published on studies of microplastics in lagoons did not occur until 2019; (ii) sediments represent the matrix on which sampling and extraction variability allow the statistical analyses on data reported by the literature; (iii) the Analysis of Similarities (ANOSIM) test two-way evidenced that the level of protection of marine and terrestrial areas produced similar values while the habitat type showed low significance in terms of its effect on microplastic levels, shape and size in sediments. View Full-Text
Keywords: microplastics; VOSviewer; marine microplastics; marine litter; metadata analysis; natural capital; transitional water ecosystems microplastics; VOSviewer; marine microplastics; marine litter; metadata analysis; natural capital; transitional water ecosystems
►▼ Show Figures 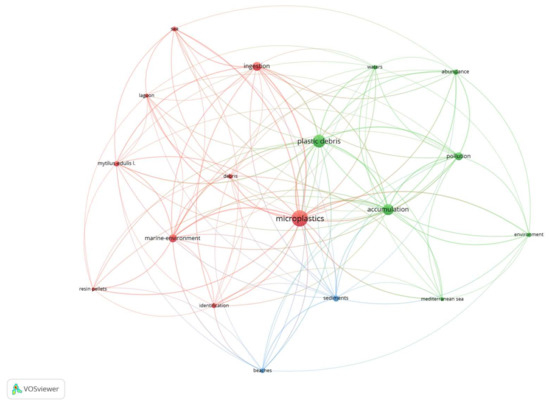