This study examines the distribution and seasonal evolution of hydrographic, hydrodynamic, and nepheloid layers in Ushuaia Bay and the submerged glacial valley that connects it to the Beagle Channel. The hydrographic structure is highly seasonal, with a total mixing of the water column in winter and the appearance of a pycnocline between 50 and 70 m deep from spring to late autumn, mainly due to desalination. A counter-clockwise current sweeps the entire bay regardless of the season or phase of the tide. This current is at its maximum in the surface layer, allowing the rapid renewal of the bay’s waters, while deep currents are weak and imply a slow renewal of the valley’s waters. Turbid and oxygen-depleted structures are observed in summer in the valley. The combination of seasonal stratification, high organic matter inputs from planktonic production, oxygen consumption for remineralization, and sluggish circulation results in a decrease in near-bottom oxygen concentration in the glacial valley at the end of the stratified season, before mixing and re-oxygenation of the water column during the southern winter. The possible impact of dissolved oxygen depletion in the bottom waters of the valley on benthic organisms, like crustaceans, is discussed. View Full-Text
Keywords: Beagle Channel; Ushuaia Bay; hydrology; suspended particulate matter; hypoxia Beagle Channel; Ushuaia Bay; hydrology; suspended particulate matter; hypoxia
►▼ Show Figures 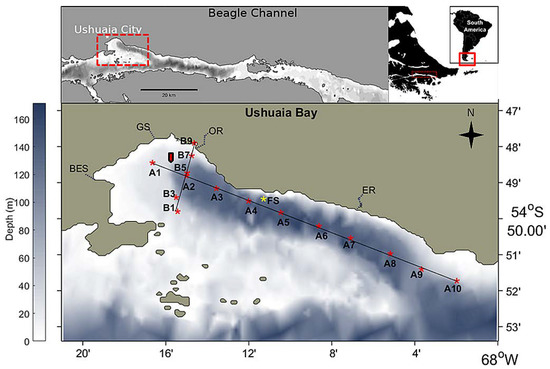