Site Fidelity, Habitat Use, and Movement Patterns of the Common Carp during Its Breeding Season in the Pearl River as Determined by Acoustic Telemetry

Spatiotemporal Distribution and Species Composition of Fish Assemblages in the Transitional Zone of the Three Gorges Reservoir, China

The river–reservoir transitional zones play an important role in maintaining riverine fish biodiversity and abundance in highly regulated rivers. The Upper Yangtze River, which contains 286 fish species, is experiencing intense hydropower development. However, few studies have been conducted on the spatial distribution of fish in the river–reservoir transitional zones in the Upper Yangtze River, and it is therefore difficult to predict how this development will impact the region. In this study, a 200-kHz split-beam acoustic system in combination with biological samplings was used to investigate the composition and spatiotemporal distribution of the fish in the transition zone of the Three Gorges Reservoir (TGR) in 2017. The biological samplings comprised 7434 individuals from 61 species, 38 genera, 15 families, and 5 orders. The dominant fish species were Rhinogobio cylindricus, Coreius guichenoti, Hemiculter bleekeri, and Pelteobagrus vachelli. Acoustic detection identified the mean target strength (TS) to be −55.6 in May, −57.8 in August, and −55.8 dB in December. Accordingly, the average fish density was 4.96, 6.96, and 4.42 ind/1000 m3. Significant differences were found in the TS and fish density between flood season (August) and non-flood season (May and December). Spatially, fish preferred the meandering sections at 10–20 m deep. A size-dependent vertical distribution pattern was observed, with larger fish in the deeper layers and smaller fish in shallower waters. Lastly, our results suggest that meandering deep channels should be assigned high priority with respect to fish conservation in the Upper Yangtze River. View Full-Text
Keywords: fish distribution; hydroacoustic; environmental variables; Upper Yangtze River; Three Gorges Reservoir fish distribution; hydroacoustic; environmental variables; Upper Yangtze River; Three Gorges Reservoir
►▼ Show Figures 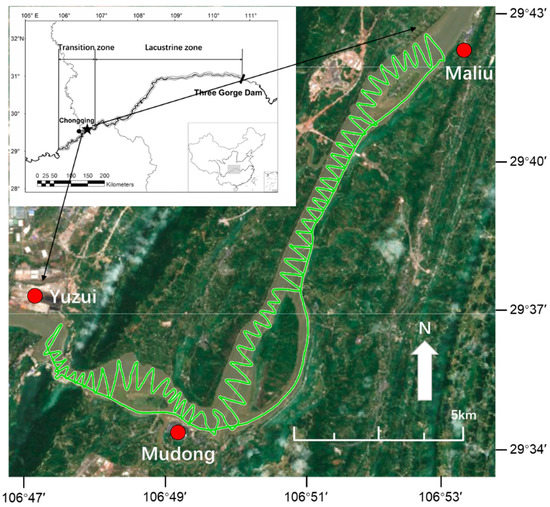