Reliable runoff series is sine qua non for flood or drought analysis as well as for water resources management and planning. Since observed hydrological measurement such as runoff can sometimes show abnormalities, data quality control is necessary. Generally, the data of adjacent hydrological stations are used. However, difficulties are frequently encountered when runoff series of the adjacent stations have different flow characteristics. For instance, when the correlation between the up- and downstream locations in which the stations are located is used as the main criterion for quality control, difficulties can occur. Therefore, this study aims to suggest a method to reconstruct an abnormal daily runoff series in the Nakdong River, Korea. The variational mode decomposition (VMD) technique is applied to the runoff series of the three target stations: Goryeong County (Goryeong bridge) and Hapcheon County (Yulji bridge and Jeogpo bridge). These runoff series are also divided into several intrinsic mode functions (IMFs) that are governed by basin runoff and disturbed flow caused by the hydraulic structure. The decomposition results based on VMD show that the runoff components in a particular station that is influenced by hydraulic structures could be reconstructed using adjacent stations, but the residual mode could not. The runoff reconstruction model using an artificial neural network (ANN), the two “divided” modes, and the residual component is established and applied to the runoff series for the target station (Yulji bridge in Hapcheon County). The reconstructed series from the model show relatively good results, with R2 = 0.92 and RMSE = 99.3 in the validation year (2019). Abnormal runoff series for 2012 to 2013 at the Yulji bridge station in Hapcheon County are also reconstructed. Using the suggested method, a well-matched result with the observations for the period from 2014 onwards is produced and a reconstructed abnormal series is obtained. View Full-Text
Keywords: uncertainty; VMD; ANN; runoff quality control uncertainty; VMD; ANN; runoff quality control
►▼ Show Figures 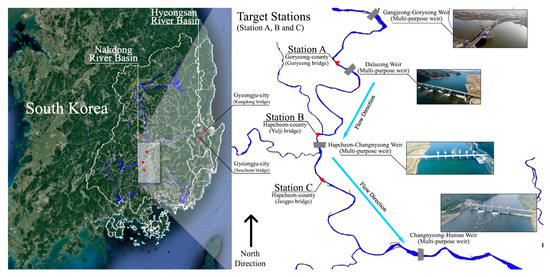