This study analyzed the hydrochemical characteristics and microbial communities of karst water in Samcheok, Korea, and compared water quality results to identify the seasonal characteristics and hydrogeological connectivity of the study areas of Hamaengbang-ri, Gyogok-ri, Yeosam-ri, and the downtown area of Samcheok. Field survey and water quality analysis were performed in July 2019, February 2020, and April 2020. Hydrochemical analysis of karst water (groundwater and surface water) showed that most samples were comprised of Ca-HCO3 and that water–rock interactions were a dominant factor compared to precipitation and evaporation (crystallization). For seasonal characteristics, water–rock interactions appeared more active in the dry season than in the rainy season. Calcite weathering was dominant in the dry season, whereas dolomite weathering dominated the rainy season. Moreover, the saturation indexes for the dry and rainy seasons were less than and greater than 0, respectively, corresponding to an unsaturation (oversaturation) state; thus, white precipitate distributed in the study areas was deposited in the rainy season. Finally, as a result of analyzing the hydraulic characteristics between regions, hydrogeological similarities were identified between Hamaengbang-ri and Yeosam-ri, and between Gyogok-ri and downtown Samcheok, which suggested hydrogeological connectivity between each of the pairs. View Full-Text
Keywords: karst hydrology; hydrochemistry; carbonate rock; isotope; saturation index; microorganism karst hydrology; hydrochemistry; carbonate rock; isotope; saturation index; microorganism
►▼ Show Figures 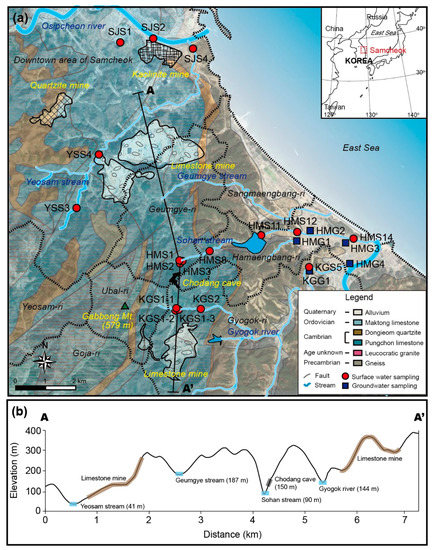