This study numerically investigates the interactions between a collapsing bubble and a movable particle with a comparable size in a free field, which is associated with the microscopic mechanisms of the synergetic effects of cavitation erosion and particle abrasion on the damages of materials in fluid machineries. A new solver on OpenFOAM based on direct numerical simulations with the volume of fluid (VOF) method capturing the interface of a bubble and with the overset grid method handling the motion of the particle was developed to achieve the fluid–structure interaction (FSI). The results show that bubbles in cases with stand-off parameter (defined as (), where is the initial distance between the centers of the bubble and particle, and are the particle’s radius and the initial radius of the bubble respectively >1, experience spherical-shaped collapse under the influence of the approaching particle, which is attracted by the collapsing bubble. The bubbles in these cases no longer present non-spherical collapse. Additionally, a force balance model to account for the particle dynamics was established, in which the particle velocity inversely depends on the size of the particle, and approximately on the second power of the initial distance from the bubble. This analytical result accords with the numerical results and is valid for cases with only, since it is based on the theory of spherical bubbles. These conclusions are important for further study of the interactions between a bubble and a movable particle near a rigid wall. View Full-Text
Keywords: cavitation; particle motion; synergetic effects; microscopic mechanisms; numerical simulation; analytical model cavitation; particle motion; synergetic effects; microscopic mechanisms; numerical simulation; analytical model
►▼ Show Figures 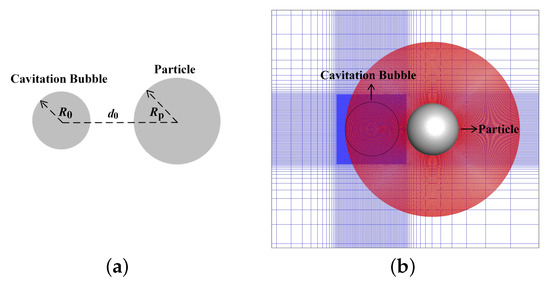