Modeling of Mass Balance Variability and Its Impact on Water Discharge from the Urumqi Glacier No. 1 Catchment, Tian Shan, China
Previous Article in Journal

Minor Imbalance of the Lowermost Italian Glacier from 2006 to 2019

The dating of well-preserved Holocene moraines in the Qiangyong Valley, southern Tibetan Plateau (TP), offers great potential for reconstructing Holocene glacier extents and examining climate changes in the region. Guided by Holocene moraine features, this study used Geographic Information System (GIS) model tools to reconstruct paleo-glacier surfaces and glacier equilibrium line altitude (ELA) depressions for three Holocene glacial stages in the valley. The GIS-based models showed that the Qiangyong Valley contained ice volumes of 8.1 × 108, 6.2 × 108, and 4.6 × 108 m3 during the early Holocene, Neoglacial, and Little Ice Age (LIA) glacial stages, and that the ELA was decreased by ~230 ± 25, ~210 ± 25, and ~165 ± 25 m, respectively, compared to modern conditions. Furthermore, the summer temperatures were estimated to be 1.56–1.79, 1.37–1.64, and 1.29–1.32 °C cooler than present to support the three Holocene glacier extents, based on the evidence that the respective precipitation increased by 20–98, 13–109, and 0.9–11 mm relative to the present, which were derived from the lacustrine pollen data for the southern TP. By comparison, this study found that the amplitudes of the ELA-based summer temperature depressions were much larger than the pollen-based counterparts for the three glacial stages, although the two proxies both showed increasing trends in the reconstructed summer temperatures. View Full-Text
Keywords: paleo-glacier reconstruction; equilibrium line altitude; Holocene glacial stages; Qiangyong Valley paleo-glacier reconstruction; equilibrium line altitude; Holocene glacial stages; Qiangyong Valley
►▼ Show Figures 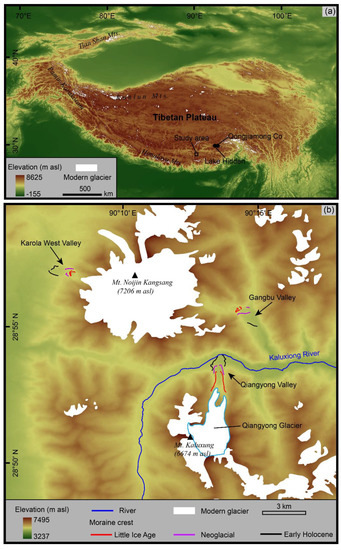