Since the real aquifer sands in subsurface systems are heterogeneous and complex in terms of the composition and structure of the inorganic and organic components, the specific sorption mechanisms and contributions of each component to overall sorption should be distinguished through manipulating both type and composition of model sorbents. In this study, three different types of simulated aquifer sands were used in this study, i.e., (1) uncoated sand and (2) HA-coated sands with different foc values (0.051% and 0.221%). Both the detailed preparation procedures and the characterization of simulated aquifer sands are described elsewhere [1,2,3]. The physicochemical properties of both uncoated and HA-coated sands were summarized in previous studies [1,2,3].

Mixtures of organic compounds comprised 12 compounds, six of which are considered to be polar (hydrophilic) with polar functional groups (i.e., oxygen atom) and six of which are considered to be nonpolar (hydrophobic) without any polar functional groups. The six polar compounds were acetone (ACE), 2-butanone (2-BUT), 2-hexanone (2-HEX), phenol (PHE), p-cresol (p-CRE), and 2,4-dimethyl phenol (2,4-DMP). The six nonpolar compounds were benzene (BZ), toluene (TOL), m-xylene (m-XYL), chlorobenzene (CB), 1,4-dichlorobenzene (1,4-DCB), and 1,2,4-trichlorobenzene (1,2,4-TCB). Selected physicochemical properties of 12 organic compounds were summarized in a previous study [1,2,3].

The concentration of each organic compound in mixtures was measured using gas chromatography (GC) (HP 6890, Hewlett-Packard Co., Inc, Palo Alto, CA, USA) with a mass-selective detector (MSD) and a flame ionization detector (FID). Both qualitative identifications and quantitative determination of each organic compound in mixtures were described in a previous study [1,2,3].

A total of three column tests were performed, one for each simulated aquifer sand without replicates, and column tests were performed sequentially using the same column testing apparatus. As illustrated in Figure 1, the column testing apparatus comprised a heavy-wall glass tube with an inner diameter of 70 mm and a length of 400 mm, seven sampling ports to collect the pore-water samples, and an outlet port to collect the effluent samples. The simulated aquifer sands were sieved (−60/+80 mesh sizes) by using the standard dry sieve technique, packed into the glass column, and compressed with a plunger to minimize side-wall flow. After dry packing, the column was flushed with CO2 gas, and a minimum of five pore volumes of organic-free nanopure water was displaced through the column prior to the column tests. The column was initially permeated with organic-free nanopure water, and then the aqueous organic mixtures at an initial concentration, C0, of 10 mg·L−1 each, was permeated through the column at a constant flow rate of approximately 243.4–252.0 mL·day−1 using the peristaltic pump. After collecting the effluent samples with the elapsed time, the effluent was allowed to accumulate in a Teflon bag (FlexFoil, SKC Inc., Eighty Four, PA, USA) at the column outlet, and 3.0 mL pore-water samples in all sampling ports were collected simultaneously for subsequent analysis of the concentrations of organic compounds in mixtures. Detailed column specifications and estimated hydrodynamic dispersion coefficients (Dh) using salt as a tracer are summarized in Table 1.

In this study, the reactive transport of each organic compound and pseudocompounds was simulated numerically using the finite-difference groundwater flow model, MODFLOW [18], and the associated reactive transport code, RT3D [19]. In column tests, the numerical model assumed saturated flow through homogeneous and isotropic simulated aquifer sands, and the specific MODFLOW model considered a rectangular two-dimensional confined flow system with length of 400 mm by width of 70 mm in the Cartesian x- and y-directions, respectively. The numerical grid was based on nodal spacings of Δx = 10 mm, Δy = 10 mm, and Δz = 72 mm. Since biological degradation was not considered due to the addition of the biocide (200 mg·L−1 NaN3) to the permeant liquids, advection, dispersion, and equilibrium sorption to simulated aquifer sands were considered as the processes governing the reactive transport of the organic compounds in mixtures. Thus, the governing equation for one-dimensional transport of the organic compounds in mixtures through simulated aquifer sands can be written as follows: where C and S are the concentration of an organic compound in the aqueous phase (mg·L−1) and the solid phase (mg·kg−1), respectively, x is the longitudinal distance of transport (mm), t is the elapsed time (d), Dh is the hydrodynamic dispersion coefficient obtained from the results of the salt tracer (KCl) (mm2·day−1), vs is the average linear seepage velocity (mm·day−1), ρb is the bulk (dry) density (g·mL−1), and n is the total porosity. According to these considerations and Figure 1, the column was assumed to be initially free of any organic compound (C(x,0) = 0), a constant source concentration using injection wells was assumed for the upper boundary condition (C(0,t) = C0), and a zero concentration gradient using constant head was assumed for the lower boundary condition (∂C(L,t)/∂x = 0).
According to the results of a previous study evaluating the equilibrium sorption of the same organic compounds to the identical simulated aquifer sands [1,2,3], the sorption of the organic compounds in mixtures to simulated aquifer sands was assumed to follow the Freundlich sorption isotherm equation as follows: where Kf ((mg·kg−1)/(mg·L−1)N) is the Freundlich unit sorption capacity, and N (dimensionless) is the joint measure of the relative magnitude and diversity of energies [1].
Since the root-mean-square error (RMSE) is more appropriate to represent model performance than the mean absolute error (MAE) when the error distribution is expected to be Gaussian [21], the agreement between the experimentally measured concentrations according to the effluent/pore-water samples and the fitted (or predicted) concentrations estimated from MODFLOW-RT3D was evaluated in terms of the root-mean-square error (RMSE) defined as follows: where Xi,mes and Xi,fit are the measured and fitted (or predicted) values for C(x,t), respectively, and p is the sample size.
This error function attempts to minimize the fractional error distribution across the entire concentration ranges from the comparison of measured values with the corresponding fitted (or predicted) values. Once the minimum of the error function was achieved, the values for the Freundlich sorption parameters (Kf and N) were obtained. The values for the Freundlich sorption parameters obtained from the column tests were estimated using the overall effluent data, and the resulting predicted concentration profiles within a column were compared to the measured concentration profiles to validate the effectiveness of lumped approach.

To assess the similarity among organic compounds in terms of reactive transport behavior, standardized sorption parameters for each organic compound in mixtures were plotted on the basis of two clustering variables (i.e., Kf and N). Then, the similarity of reactive transport among organic compounds was measured according to the Euclidean distance between each pair of organic compounds, and the distance between organic compounds was determined. Finally, the most appropriate clustering algorithm to maximize the differences between clusters relative to the variation within the clusters was determined. In this study, Ward’s method was performed by specifying METHOD = WARD in PROC CLUSTER (SAS® 9.1, SAS Institute Inc. Cary, NC, USA). After evaluating all possible clusters, the best number of clusters and cluster components was determined according to both statistical criteria and reactive transport behavior. Consistent with this study, cluster analysis was applied to the lumped approach for grouping the list of species and reactions [1,3,8,11] since cluster analysis provides a rational way to lump large quantities of empirical data into fewer groups [22].

3.1. Comparison of Breakthrough Curves and Concentration Profiles of 12 Organic Compounds in Mixture

3.4. Development of A Priori Grouping Criteria from Column Tests

3.5. Evaluation of Effectiveness of Pseudocompounds to Simulated Aquifer Sands 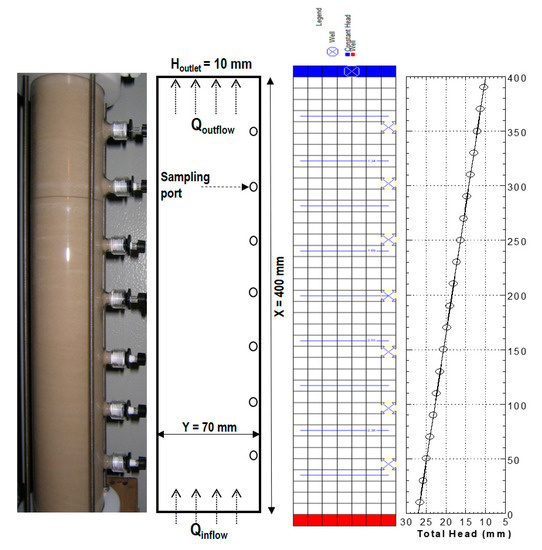 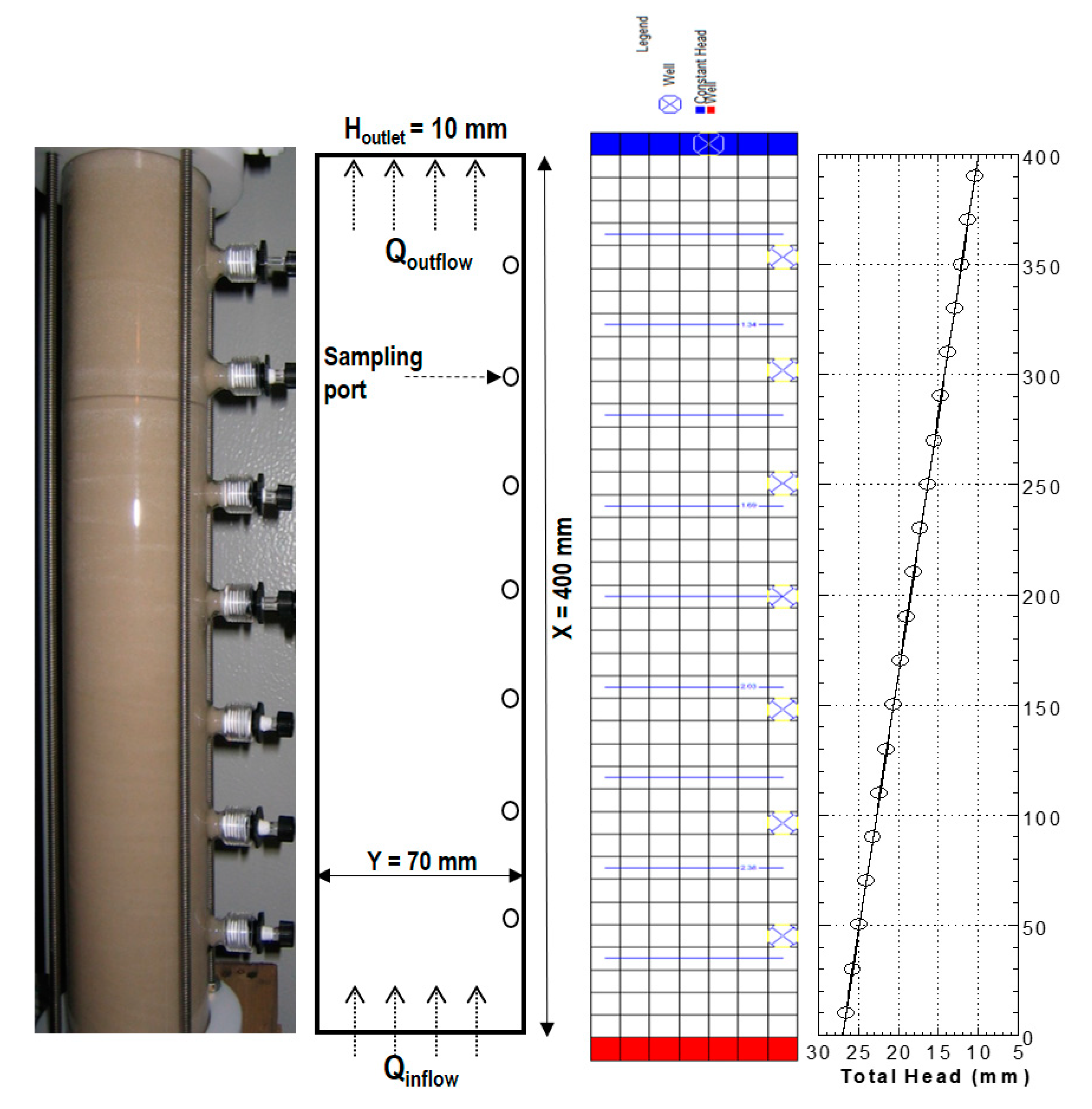 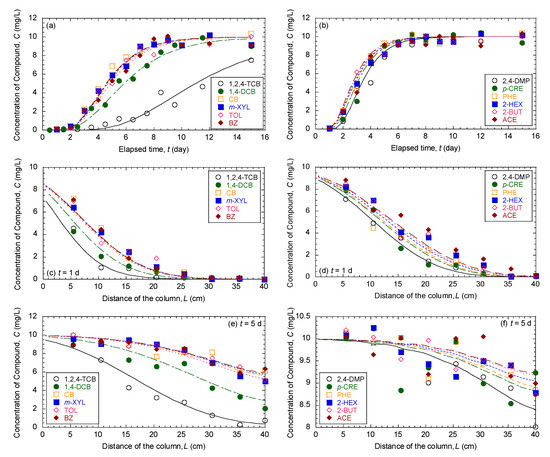 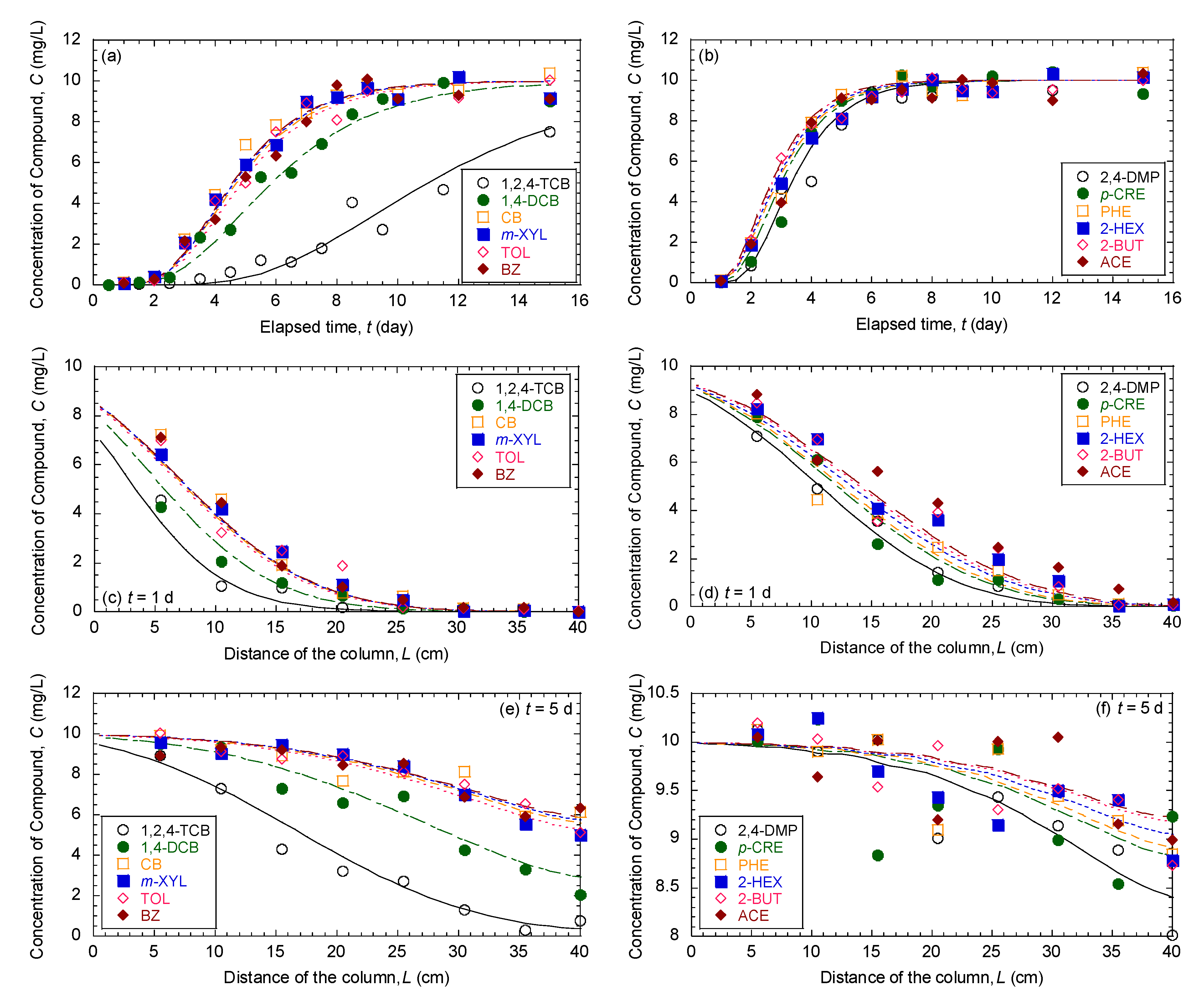 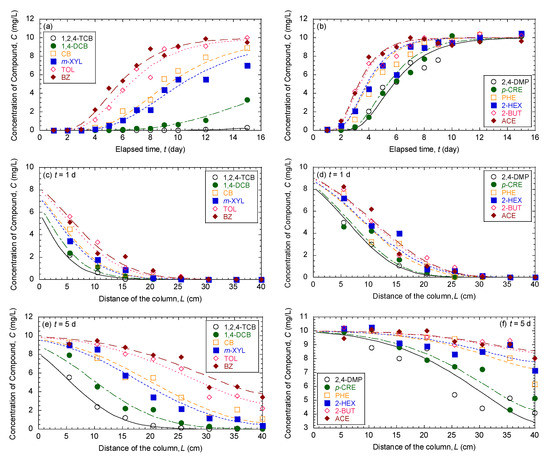 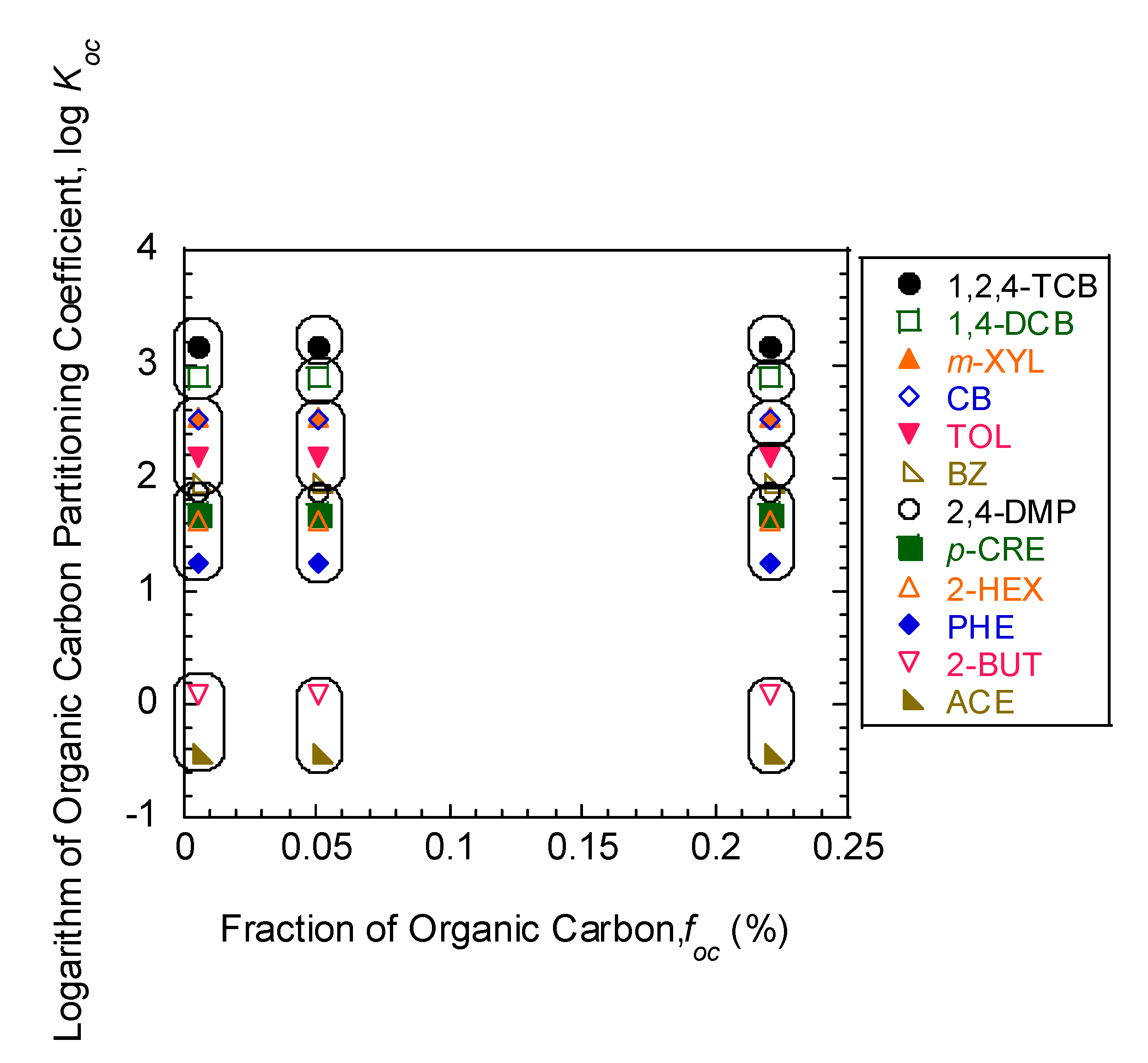 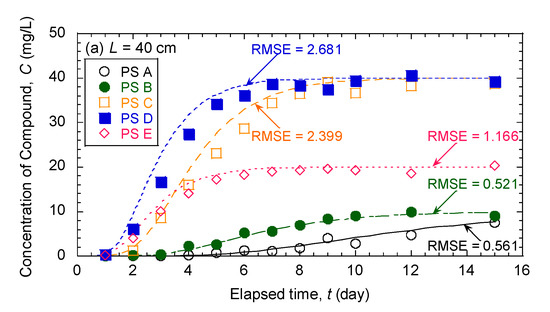 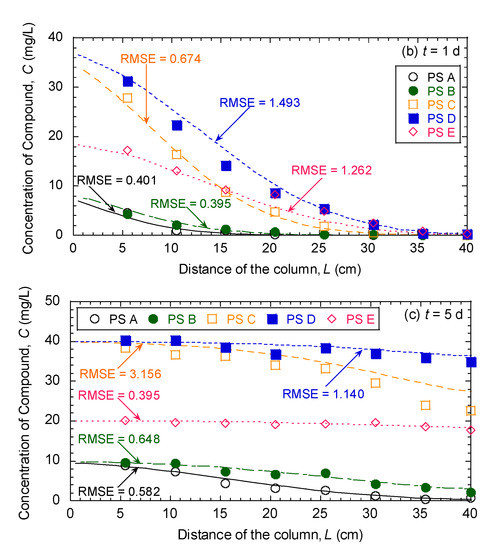 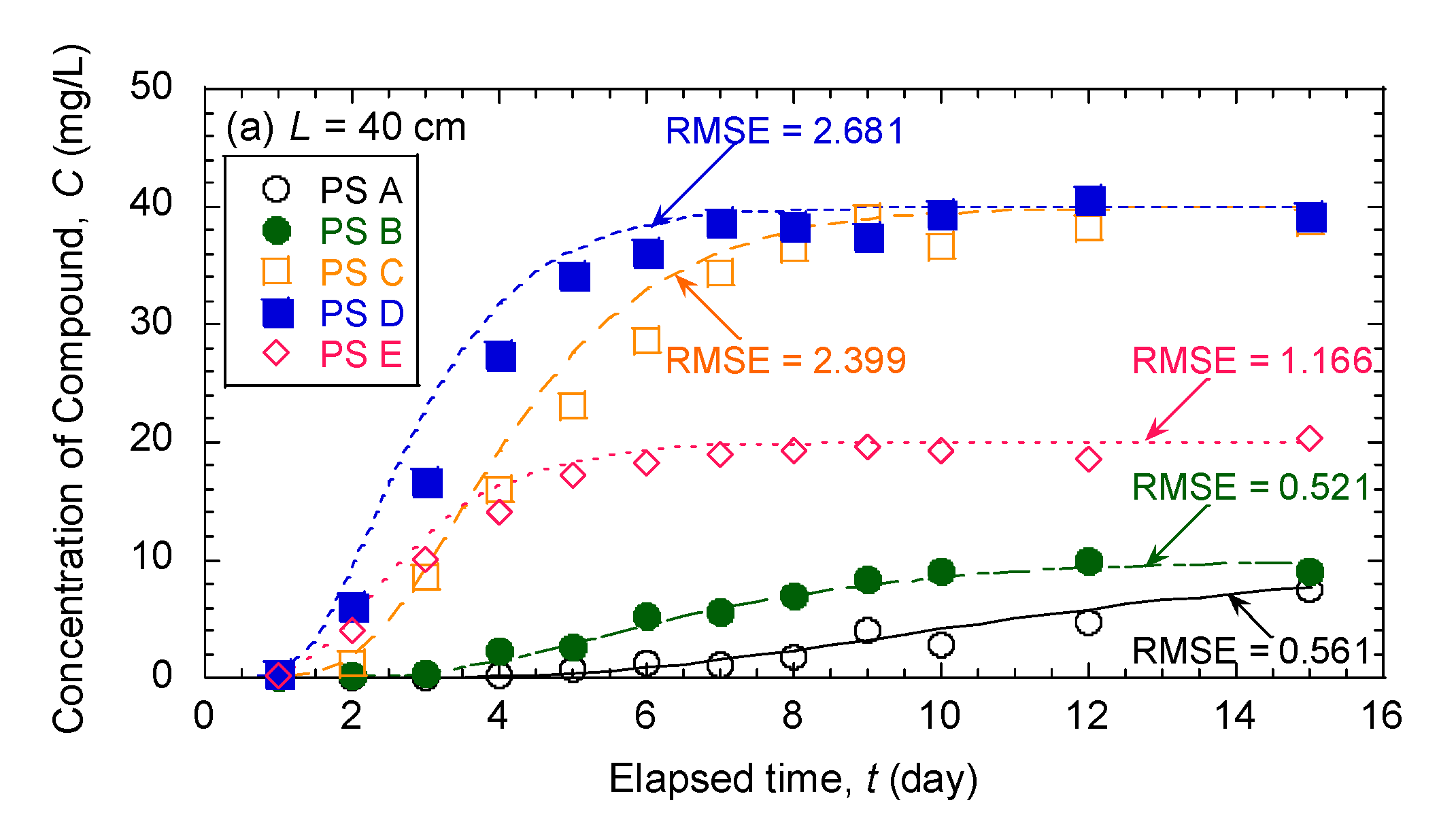 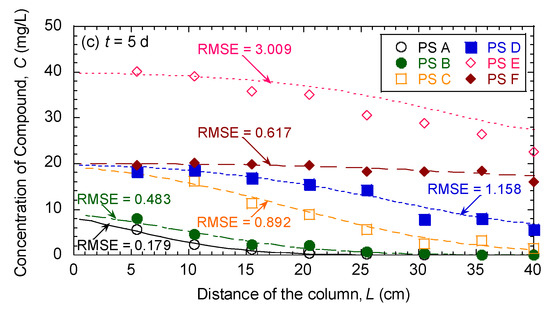 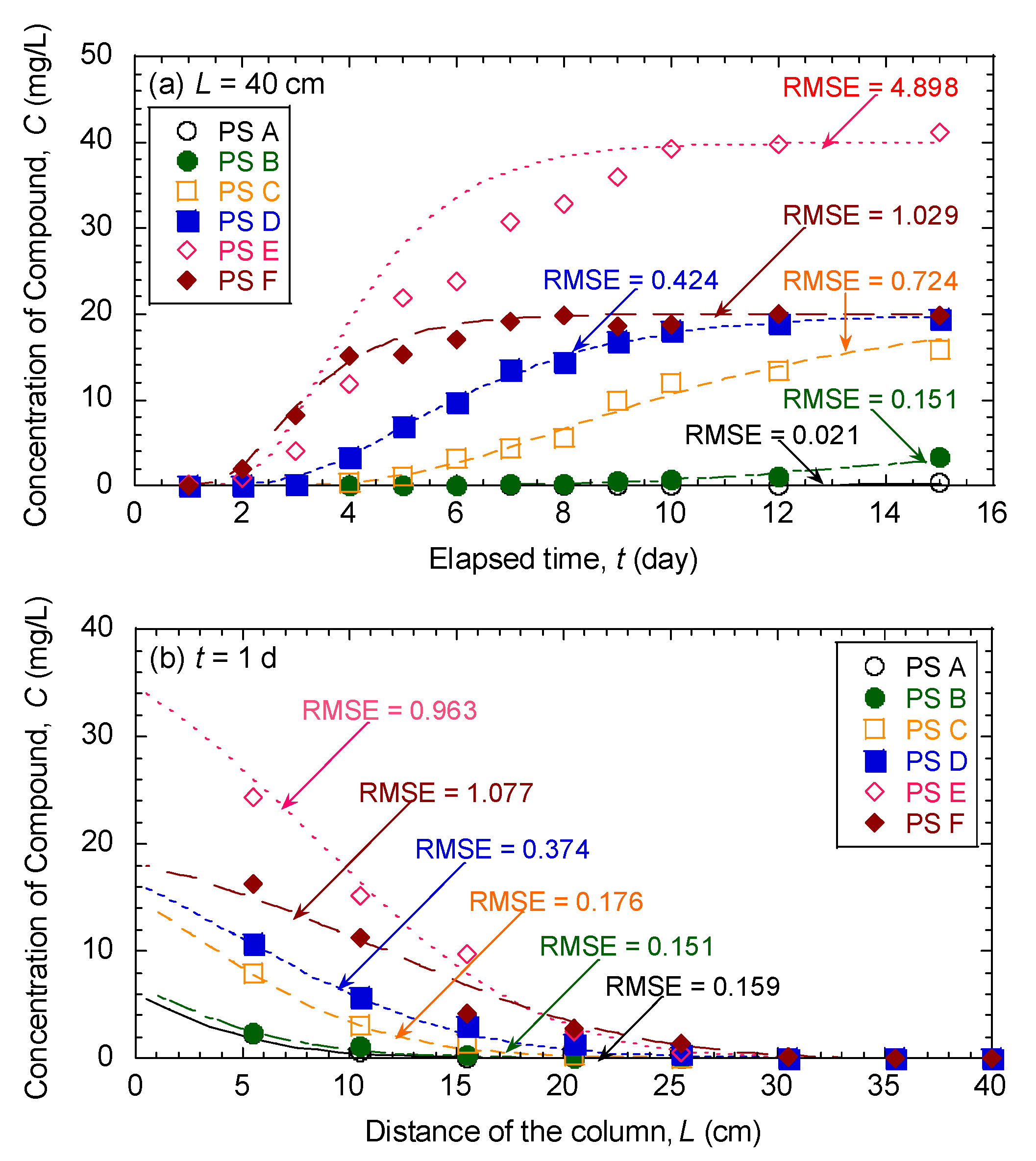