Evaluation and Quantification of the Effects of Climate and Vegetation Cover Change on Karst Water Sources: Case Studies of Two Springs in South-Western Slovenia

Based on the complex topography and climate conditions over the Tianshan Mountains (TSM) in Xinjiang, China, the new precipitation product, the Global Precipitation Measurement (GPM) (IMERG), and its predecessor, the Tropical Rainfall Measuring Mission (TRMM) 3B42 (TMPA), were evaluated and compared. The evaluation was based on daily-scale data from April 2014 to March 2015 and analyses at annual, seasonal and daily scales were performed. The results indicated that, overall, the annual precipitation in the Tianshan area tends to be greater in the north than in the south and greater in the west than in the east. Compared with the ground reference dataset, GPM and TRMM datasets represent the spatial variation of annual and seasonal precipitation over the TSM well; however, both measurements underestimate the annual precipitation. Seasonal analysis found that the spatial variability of seasonal precipitation has been underestimated. For the daily assessment, the coefficient of variation (CV), correlation coefficient (R) and relative bias (RB) were calculated. It was found that the GPM and TRMM data underestimated the larger CV. The TRMM data performed better on the daily variability of precipitation in the TSM. The R and RB data indicate that the performance of GPM is generally better than that of TRMM. The R value of GPM is generally greater than that of TRMM, and the RB value is closer to 0, indicating that it is closer to the measured value. As for the ability to detect precipitation events, the GPM products have significantly improved the probability of detection (POD) (POD values are all above 0.8, the highest is 0.979, increased by nearly 17%), and the critical success index (CSI) (increased by nearly 9% in the TSM) is also better than TRMM, although it is only slightly weaker than TRMM in terms of the false alarm ratio (FAR) and frequency bias index (FBI). Overall, GPM underestimates the low rainfall rate by 6.4% and high rainfall rate by 22.8% and overestimates middle rain rates by 29.1%. However, GPM is better than TRMM in capturing all types of rainfall events. Based on these results, GPM-IMERG presents significant improvement over its predecessor TRMM 3B42. Considering the performance of GPM in different subregions, a lot of work still needs to be done to improve the performance of the satellite before being used for research. View Full-Text
Keywords: GPM; TRMM; Tianshan Mountains; spatial distribution of precipitation; precipitation estimation GPM; TRMM; Tianshan Mountains; spatial distribution of precipitation; precipitation estimation
►▼ Show Figures 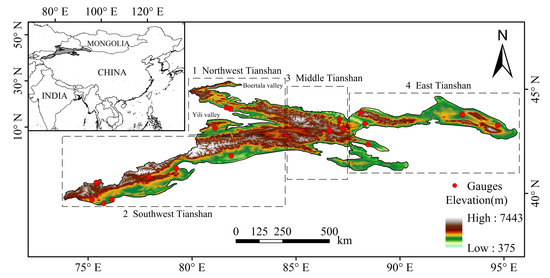