Are Sterols Useful for the Identification of Sources of Faecal Contamination in Shellfish? A Case Study

Reforestation Based on Mono-Plantation of Fast-Growing Tree Species Make It Difficult to Maintain (High) Soil Water Content in Tropics, a Case Study in Hainan Island, China

Our study site was located in the Baopoling mountain, which is a limestone mountain in Sanya City, Hainan China (BPL, 109°51′01″ E, 18°31′99″ N; Figure 1). It has a tropical monsoon oceanic climate with a mean annual temperature of 28 °C. The average annual precipitation on the island is 1500 mm, and most (91%) of the precipitation occurs in the wet season (June to October) [32]. The inhabitants of the village near BPL get their water supply from the nearby pond and the water works in Sanya city. Additionally, the occurrence of a major cement factory (Huasheng cement factory, China) near BPL exponentially increases the water demand so that the city sometimes gets very limited water supply in the dry season. The typical vegetation of the BPL is a species-rich tropical monsoon broad-leaf forest.
Due to 20 years of limestone mining associated with the cement industry, this 0.2 km2 highly degraded tropical forest now consists merely of bare rocks that do not support plant life (Figure 2). Areas of the BPL outside of this 0.2 km2 degraded area have been significantly disturbed and, therefore, have remained as a species-rich tropical rainforest (Figure 2). In May 2016, we used the adjacent undisturbed forest as a reference to perform a reforestation project in BPL with the aim to recover soil water content and vegetation cover of BPL. The slope and deep soil layers of the undisturbed forest area were used as a reference to reconstruct slope and soil layers for the reforested area. Then, refilling of the area was performed with the help of the soil from the undisturbed tropical rainforest areas to monoculture seedlings (3 m height and 2 cm diameter at breast height (DBH)) of eight fast-growing tree species: Terminalia neotaliala, Bombax malabarica, Cleistanthussumatranus, Ficusmicrocarpa, Muntingiacolabura, Acacia mangium, Leucaena glauca and Bougainvillea spectabilis. Seedlings of these eight fast-growing species were purchased commercially. These species are known to be fast-growing and have high survival rates within the study region. Therefore, we reasoned that these eight species should have high potential to prevent landslides during frequent typhoon and heavy rains. These eight species were separately monocultured from the top to the bottom of BPL (Figure 2), and planting density for each of the species was maintained at 100 stems per hectare. The restoration project was finished at the end of the year 2016. In 2019, thirty plots, each of 20 × 20 m2 (an area of 400 m2 for each plot) that were at least 100–300 m apart from one another, were randomly sampled across the adjacent undisturbed old-growth forest. Within each plot, all freestanding trees with diameter of ≥1 cm at breast height (DBH) were measured and identified to species. We finally found 80 tree species in the undisturbed old-growth forest, and we selected the 8 tree species (200–300 stems per hectare) Brideliatomentosa, Radermacherafrondosa, Lepisanthesrubiginosa, Rhaphiolepisindica, Pterospermumheterophyllum, Fissistigmaoldhamii, Psychotria rubra, and Cudraniacochinchinensis as our candidate dominant slow-growing tree species.

We selected two sites (A and B) in the reforested and the undisturbed areas, respectively, in BPL (Figure 2). In the peak of the wet season (August) in 2019, we sampled 20 fully expanded, healthy leaves from the same five independent individuals for each of the eight fast-growing species and the eight dominant slow-growing species found in the surrounding undisturbed region. Resampling was performed in the dry season (February) in 2020. Leaf samples were used to measure five hydraulic traits: transpiration rate (TR; μmol m−2 s−1), maximum photosynthesis rate (Amass; μmol m−2 s−1), stomatal conductance (SC; mmol m−2 s−1), leaf hydraulic conductivity (LHC; mmol m−2 s−1 MPa−1), and leaf turgor loss point (TLP; Mpa). Detailed descriptions of the trait measurements are provided in the Supplementary Materials. We also collected 30 soil samples at a depth of 0–100 cm at site A and site B, respectively, to measure soil water content (mg kg−1) gravimetrically. Every soil sample was homogenized for the whole depth (0–100 cm). Resampling was performed again in the dry season (February) in 2020.

The entire project was completed in 2017, and in the past two years, both typhoon and heavy rains during the wet seasons have never caused landslide and tree lodgings on the reforested site. The mean precipitation per month in the wet and dry seasons were 1380 mm and 182 mm, respectively (Figure S1 in the Supplementary Materials). The native dominant tree species in the dry season had significantly much lower (from 1/5th to 1/2th) transpiration rate, photosynthesis rate, stomatal conductance, lead hydraulic conductivity, and leaf turgor loss point than those in the wet season (Figure 3; p < 0.05, generalized linear mixed effect model with Poisson error family). In contrast, compared to the wet season, nonnative fast-growing species had significantly higher (5 times) transpiration rate and leaf hydraulic conductivity, but photosynthesis rate, stomatal conductance and leaf turgor loss point were not significantly different (Figure 3). In the wet season, nonnative species have significantly higher (from 2 to 4 times) transpiration rate, photosynthesis rate, stomatal conductance, and leaf hydraulic conductivity but comparable leaf turgor loss point, compared to those of the native species (Figure 4). During the wet season, all five traits for nonnative fast-growing tree species were much higher (6 times) than those for native dominant tree species (Figure 4).
Soil water content slightly decreased from the wet to the dry seasons, in the undisturbed ecosystem, whereas soil water content in the wet season was 2.1 times the dry season in the reforested area (Figure 5). Moreover, soil water content for the undisturbed ecosystem is much higher (1.5 to 2.5 times) than those for the reforestation project in both the seasons (Figure 5).

The following are available online at https://www.mdpi.com/2073-4441/12/11/3077/s1, Figure S1: The variations of mean precipitation in wet (June to October) and dry seasons (November to May) based on precipitation record per month from the local weather bureau in Sanya City, China, Text S1: Methods for functional trait measurements.

This work was funded by scientific research project of ecological restoration of Baopoling mountain in Sanya, China and a startup fund from Hainan University (KYQD (ZR) 1876).

The authors thank Liang Cong‘s assistance with the field experiment. 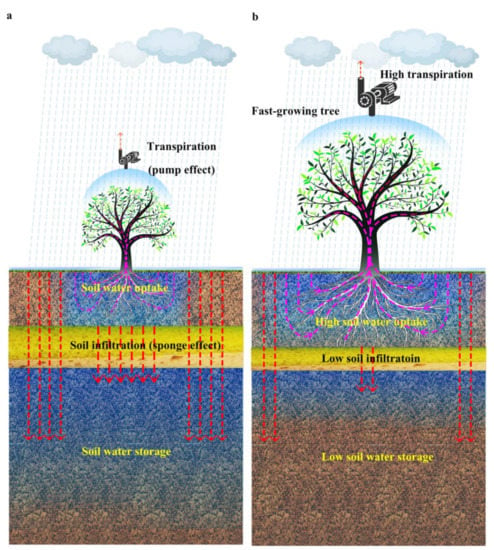 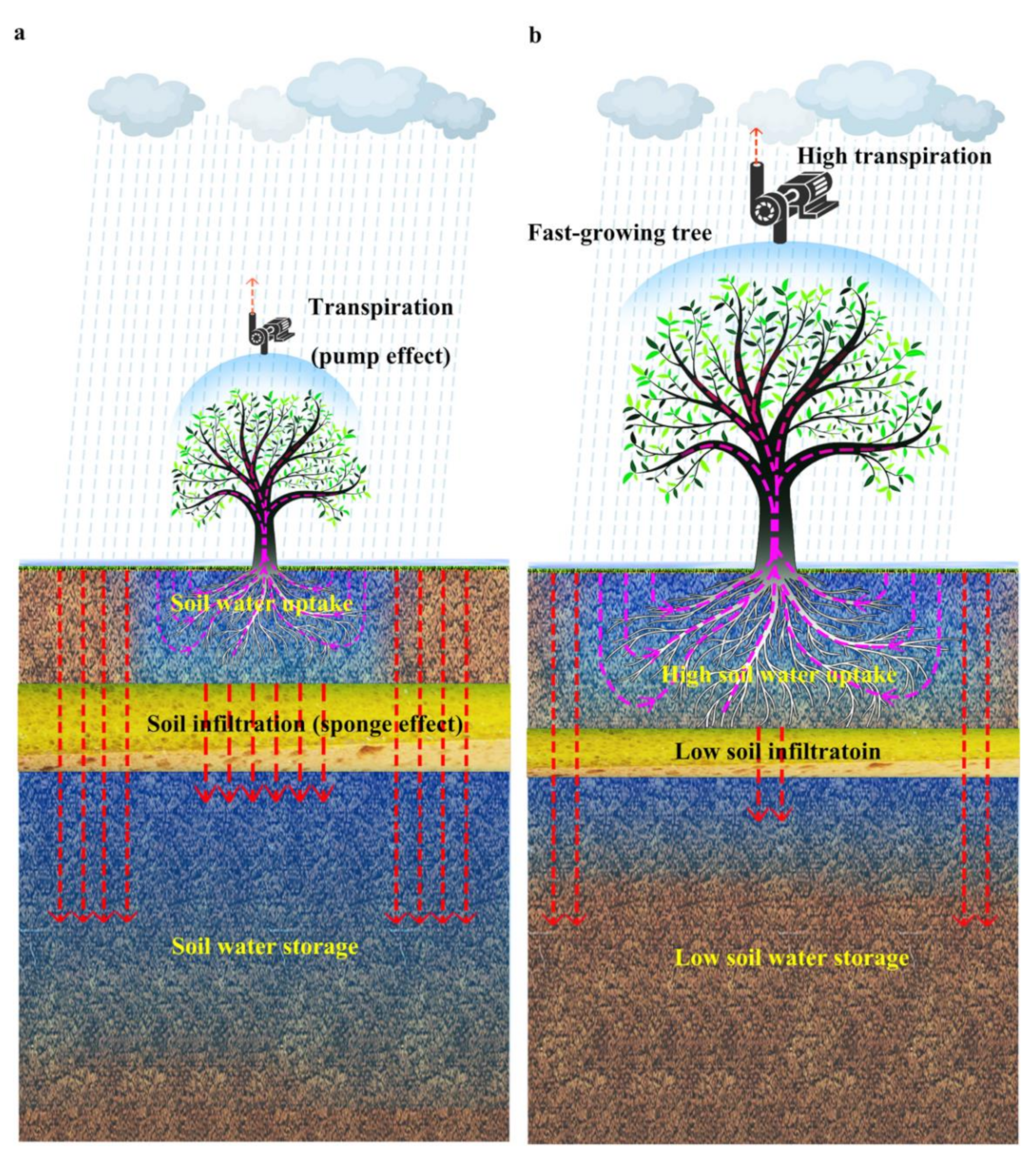 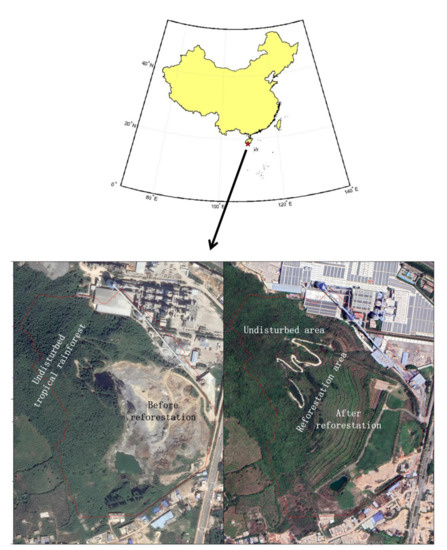 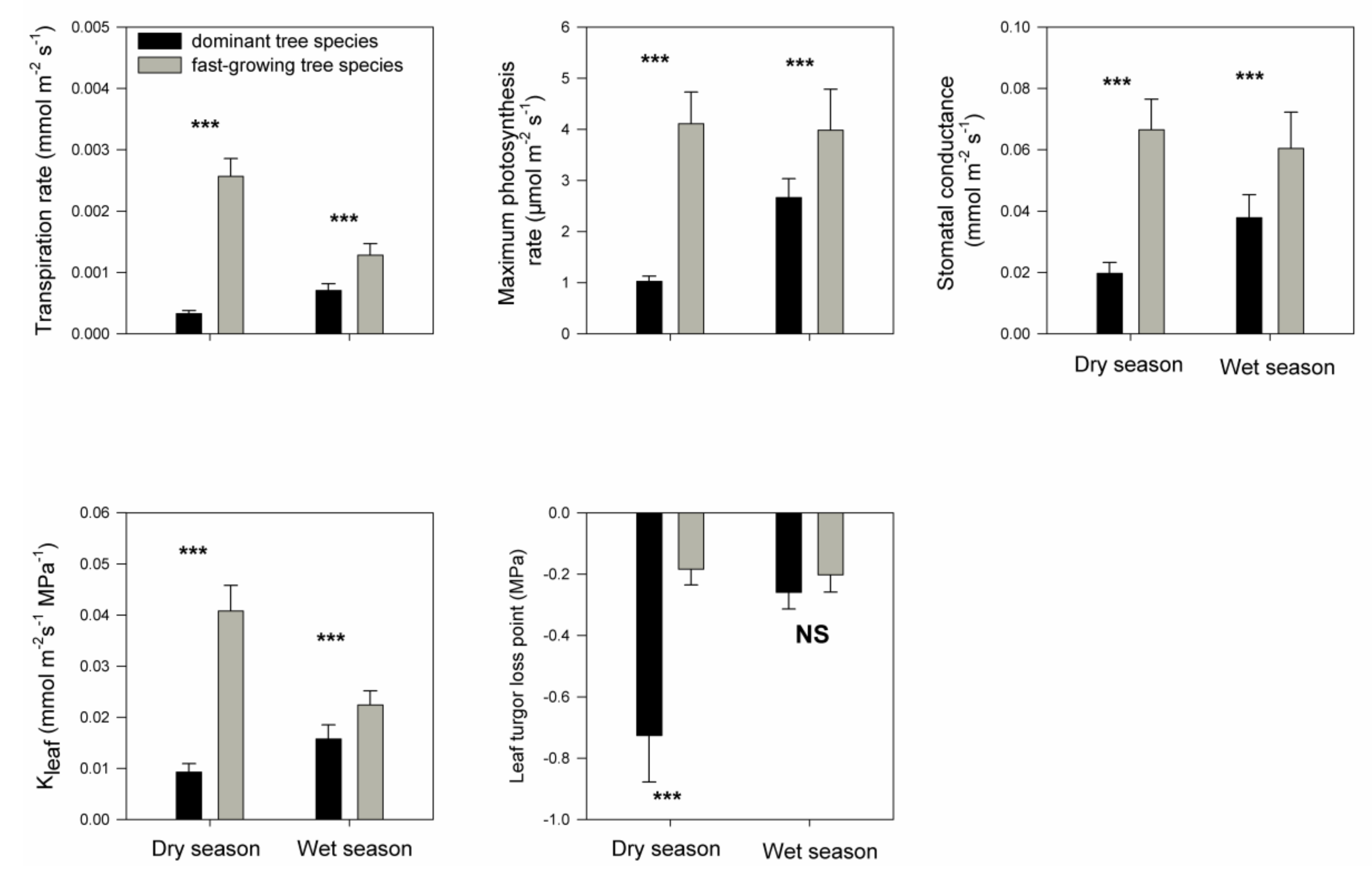 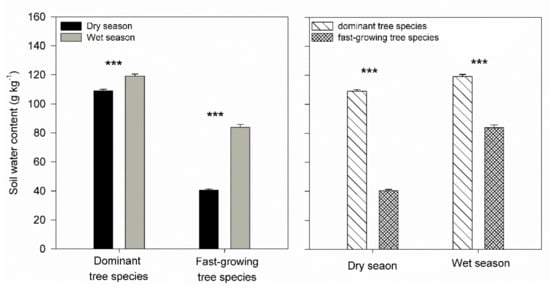