Coastal areas are threatened by extreme meteorological phenomena, such as wave storms. Therefore, the analysis of such events, such as providing information for their potential hazards assessment, is a key element in coastal management. In this study, a preliminary assessment of flood vulnerability due to storms was performed in Rhodes Island, Greece. Firstly, storm events were defined in terms of significant wave height, peak period, and duration, and they were grouped by means of cluster analysis into five classes (from weak to extreme) reflecting the intensity of each event. Subsequently, flood hazard was assessed by using an empirical formula for wave run-up calculations on cross-shore profiles and storm surge data at the region. Finally, a Flood Vulnerability Index (FVI) was used for assessing vulnerability according to a scale from very low to very high. The most intense storms were found to occur in the eastern, southeastern, and southern part of the island. More than 60% of storms were classified as weak, while extreme events were found to occur with a frequency of less than 2.5%. Regarding flood hazard and vulnerability, the maximum values of wave run-up were calculated in the southeastern region, but the most vulnerable part was found to be the northwestern region, as the FVI was assessed as very high for weak and extreme events. View Full-Text
Keywords: wave storms; run-up; storm surge; coastal flooding; Flood Vulnerability Index; Aegean Sea wave storms; run-up; storm surge; coastal flooding; Flood Vulnerability Index; Aegean Sea
►▼ Show Figures 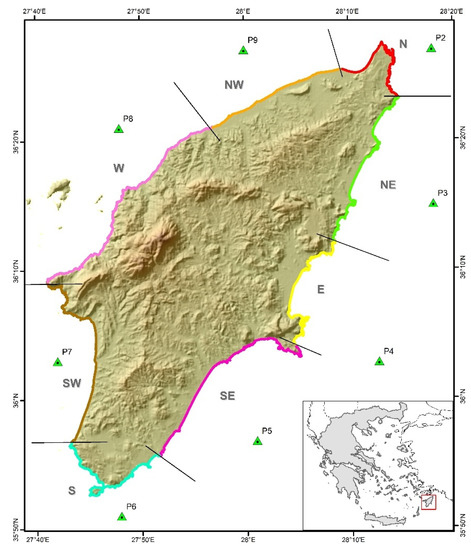