Study of Snap Loads for Idealized Mooring Configurations with a Buoy, Inextensible and Elastic Cable Combinations for the Multi-Float M4 Wave Energy Converter
Next Article in Special Issue

Formation of Clay-Rich Layers at The Slip Surface of Slope Instabilities: The Role of Groundwater

Deformation mechanisms of the slopes are commonly schematized in four different stages: pre-failure, failure, post-failure and eventual reactivation. Traditional numerical methods, such as the finite element method and the finite difference method, are commonly employed to analyse the slope response in the pre-failure and failure stages under the assumption of small deformations. On the other hand, these methods are generally unsuitable for simulating the post-failure behaviour due to the occurrence of large deformations that often characterize this stage. The material point method (MPM) is one of the available numerical techniques capable of overcoming this limitation. In this paper, MPM is employed to analyse the post-failure stage of a landslide that occurred at Cook Lake (WY, USA) in 1997, after a long rainy period. Accuracy of the method is assessed by comparing the final geometry of the displaced material detected just after the event, to that provided by the numerical simulation. A satisfactory agreement is obtained between prediction and observation when an increase in the groundwater level due to rainfall is accounted for in the analysis. View Full-Text
Keywords: groundwater; landslides; post-failure stage; run-out simulation; material point method groundwater; landslides; post-failure stage; run-out simulation; material point method
►▼ Show Figures 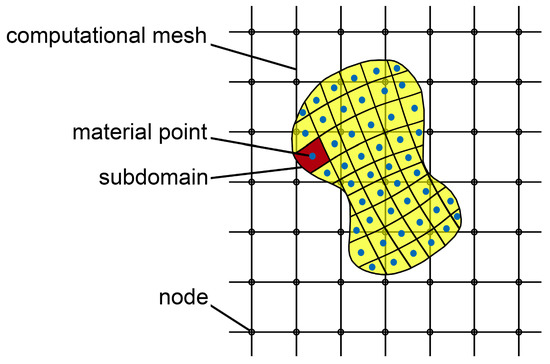 Troncone, A.; Pugliese, L.; Conte, E. Run-Out Simulation of a Landslide Triggered by an Increase in the Groundwater Level Using the Material Point Method. Water 2020, 12, 2817.


Troncone A, Pugliese L, Conte E. Run-Out Simulation of a Landslide Triggered by an Increase in the Groundwater Level Using the Material Point Method. Water. 2020; 12(10):2817.


Troncone, Antonello; Pugliese, Luigi; Conte, Enrico. 2020. "Run-Out Simulation of a Landslide Triggered by an Increase in the Groundwater Level Using the Material Point Method." Water 12, no. 10: 2817.