Article
Use of Larval Morphological Deformities in Chironomus plumosus (Chironomidae: Diptera) as an Indicator of Freshwater Environmental Contamination (Lake Trasimeno, Italy)
by

:
The mentum deformity incidence in Chironomus plumosus larvae to assess the environmental contamination level in Lake Trasimeno, Central Italy, was investigated. The survey lasted from May 2018 to August 2019. Fifty-one samplings were carried out: 34 in the littoral zone and 17 in the central zone. The deformity assessment was based on 737 and 2767 larval specimens of C. plumosus collected from the littoral and central zones, respectively. Comparison of the larval morphometric variables between normal and deformed specimens highlighted that the deformities did not cause alterations of the larval growth. The deformity incidence amounted to 7.22% in the whole Trasimeno’s ecosystem, reaching 8.28% in the littoral zone and 6.94% in the central zone. Among the different seasonal cohorts, the spring cohort had overall the highest deformity value (11.41%). The deformity type assessment protocol highlighted that the most common deformity type was “round/filed teeth” (64%). The results of this 2018–2019 survey revealed a low deformity incidence, within the background range of relatively low-impacted freshwaters. Comparison with previous investigations (2000–2010) of the same habitat showed a clear decrease of the deformity incidence. This study further contributes to the evaluation of the mentum deformity in chironomids that represent an indicator endpoint of the anthropogenic contamination level in freshwaters.
Keywords:
Chironomidae; Chironomus plumosus larvae; mentum deformities; freshwater contamination; Lake Trasimeno

Anthropic activities continuously add urban, industrial, and agricultural wastes into the environment. Common and widespread groups of pollutants, such as heavy metals, pesticides, polycyclic aromatic hydrocarbons, and polychlorinated biphenyls are dispersed into the environment forming a complex mixture whose toxic effects are difficult to quantify [1,2,3].
Normally, the set of contaminants contributing to the total toxic burden is not well known and, even when the exact composition is known, it is difficult to interpret the estimate of potential effects of simple additivity or synergism or antagonism [4]. In fact, the measurement of concentrations of toxic elements or compounds in the environment does not imply knowledge of the resulting toxicity of their mixture on the biota [5]. Furthermore, the peculiar trophic network of living organisms [6] determines bioaccumulation and biomagnification processes of contaminants [7,8,9].
For an evaluation of the anthropogenic contamination in a given territory, the biological monitoring of freshwaters seems to be the most appropriate strategy. The rains draining the atmosphere and the soil carry pollutants into the water receptor of the underlying hydrographic basin [10,11].
Among aquatic organisms, benthic macroinvertebrates inhabiting the surficial layer of the bottom sediments in inland waters are valid biological indicators because they are subject to the resulting action of pollutants and thus respond to many ecological stressors [12,13,14,15,16]. Aquatic Diptera typically represent the predominant component of the benthic biocoenosis, and among them chironomids (Chironomidae: Diptera) in particular are characterized by diverse species compositions and have a key role in the trophic network of freshwater ecosystems especially those impaired by substantial organic loads [17]. Therefore, chironomid communities represent an important food source for a wide range of aquatic and terrestrial animals [18], also considering in some cases, the role of pestiferous chironomid species [19].
Some chironomid species are frequently used as endpoints (as test organisms) in ecotoxicological bioassays for the assessment of ecological risks; for example, larval growth rate, adult emergence, and survival [20]. In particular, widely used in bioassays are the larvae of aquatic midge species belonging to the genus Chironomus, such as Chironomus plumosus (Linnaeus, 1758), Chironomus riparius (Meigen, 1804), Chironomus tentans (Fabricius, 1805), Chironomus sancticaroli (Strixino and Strixino, 1981), and Chironomus tepperi (Skuse, 1889) [21,22,23,24,25].
In freshwater ecosystems, these bioindicator chironomid species are common, abundant, and tolerant to polluted sediments. The exposure to potentially contaminated sediments is due to their benthic habits and feeding on fine particulate organic matter (POM: 0.5 µm–1 mm) collected from sediments [18]. Thus, they exhibit suitability in monitoring the pollutant effects in inland waters.
In several laboratory and field studies, an association between environmental contamination level (metals, such as As, Cd, Cr, Cu, Hg, Mn, Ni, Pb, Zn, and organic compounds, such as polychlorinated biphenyls (PCBs) and pesticides) and the onset of sublethal effects as deformities of mouthparts (i.e., mentum, mandibles, and pectin epipharyngis) in chironomid larvae has been observed. In this regard, studies on chironomid mouthpart deformities have been developed since the 1970s [26,27,28] and a vast amount of literature based on laboratory bioassays [22,23,29,30,31,32,33,34,35,36,37,38,39,40,41] and field surveys [21,42,43,44,45,46,47] endorses that the incidence of these deformities is well associated with the degree of sediment toxicity, whereas no relationship has been detected between deformed phenotypes and organic enrichment; hence, the water quality assessment indices are not always consistent with the use of chironomid deformities [48]. However, some studies have expressed concerns about the association between deformity incidence and toxicants [24,49].
The mouthpart deformities probably are a consequence of the interaction of contaminants, playing as endocrine-disrupting chemicals, with hormones structurally related to estrogen, such as ecdysone, that leads and regulates insect growth and metamorphosis [50]. Therefore, the “altered” ecdysone might interfere during the molting processes in larval development, causing phenotypic anomalies, as the mouthpart deformities in chironomids [51].
Thus, morphological deformities in chironomids are an aspecific response to different contaminants, such as heavy metals and pesticides, and an ecotoxicological endpoint to evaluate the total effects of the exposure to a toxic mixture of peculiar toxicants present in the freshwater environments [4,22]. For this reason, chironomid deformities are a reliable biomarker for assessing environmental toxicity.
The purpose of the present research was: (i) to use the incidence of mentum deformities in C. plumosus larvae as an effective tool for biological assessment of the environmental contamination entity in Lake Trasimeno, Central Italy; (ii) to compare the results with previous investigation in Lake Trasimeno (nearly ten years ago [43]) and evaluate the enhancement of environmental contamination over time.

Lake Trasimeno, the fourth largest lake in Italy, is located within the Tiber River basin in Umbria, Central Italy. It is the most extended lake of peninsular Italy (124.3 km2 surface). It is a shallow lake of tectonic origin, at hydrometric zero (257.33 meters above sea level (m a.s.l.)) and has an average depth of 4.7 m with a maximum depth of 6.3 m [52,53]. It is characterized by a Mediterranean climate, and its hydrological regime depends on local precipitations, which shows considerable fluctuations in water level over the years [54,55]. These peculiar features and the diffuse anthropogenic sources of pollution (agriculture, livestock farms, industry, and urban settlements) in the lake surrounding land areas make this biotope susceptible to contamination [56]. For its naturalistic and ecological importance, Lake Trasimeno is considered as a Special Area of Conservation (IT5210018; Habitat Directive, 1992/43/EEC) and Special Protection Area (IT5210070; Bird Directive, 2009/147/EC), and it is also a regional park.

The field sampling campaign was carried out in the littoral and central zones of the lake. In the littoral zone, six sampling sites were selected along a 350 m area, representative of the main bottom types (sandy, silty, and macrophyte-covered) present in Lake Trasimeno, situated along the coastline (1.5 m average depth) close to the town of Castiglione del Lago. This area among the littoral zone is most subject to the anthropic impact on the lake. In the central zone of the lake, three sampling sites were selected in the same bathymetric zone (4–5 m depth) (Figure 1). The sampling design in the present study was based on a previous investigation [43] carried out from 2000 to 2010 at Lake Trasimeno.
The survey lasted for 16 months: from May 2018 to August 2019. A total of 51 samplings were carried out: 34 in the littoral zone and 17 in the central zone (Table 1). For each of the two zones, at least one monthly survey was conducted (with the exception of June 2018 for the central zone), with a higher sampling frequency during the spring–summer period.
During each sampling occasion, in the littoral zone 6, quantitative sub-samples of the bottom sediments were collected at each sampling site (a total of 36 sub-samples) with a hand dredge (112 cm2 sampling surface); in the central zone the sampling technique consisted of a quantitative sampling of the bottom sediments with a compressed air dredge (400 cm2 sampling surface, 21 mesh per cm nylon net), repeated 5 times per site, with a duration of 1 min each (a total of 15 sub-samples).
Benthic macroinvertebrates were separated from the sediment, sorted, and then preserved in 70% ethanol for later examination in the laboratory. The main taxa composing the benthic community of each sample were firstly identified to the family level using suitable taxonomic keys [57]. Chironomid specimens were subsequently identified to genus or species (Chironomus plumosus) level through the observation of peculiar features of their head capsules [58,59,60,61].

Body length and head capsule dimensions (width and length) of chironomid larvae were measured to identify the larval stage (instar), and head capsules were then mounted on slides and fixed with Faure liquid (modified composition [22,43]).
Only Chironomus plumosus head capsules were considered for mouthpart deformity assessment and examined under a microscope. Specimens that did not have completely visible mentum or those with a cephalic capsule highly damaged during fixation on the microscope slides were excluded from further analyses. Chironomus plumosus specimens were classified according to the protocol for morphological response of the mentum, consisting of three classes [22,42,43,44,62]: Class 1 (CL. 1) specimens without morphological deformity or with mechanical damages (broken or worn menta or teeth) [4,5,63,64,65]; Class 2 (CL. 2) specimens with weak deformity (one or two round/filed teeth; one missing or additional tooth; one bifid tooth; one serrate tooth; two joined teeth; weak asymmetry); Class 3 (CL. 3) specimens with severe deformity (very round/filed teeth; two or more missing or additional teeth; two or more bifid teeth; serrate teeth; three or more joined teeth; severe asymmetry; Köhn gap; combination of different deformities). Examples of mentum deformity classes of C. plumosus larvae are shown in Figure 2.

Ljung–Box test was used to analyze temporal autocorrelation. Generalized linear models (GLM) were used to analyze differences in head width and length among the different deformity classes, setting larval instar as a covariate and Gaussian family as the link function. The test of equal proportions was carried out to examine differences in the deformity incidences among the seasons [66]. Each deformity class was tested independently and the pairwise comparisons for proportions with the Bonferroni’s correction were used as a post-hoc procedure. The results were regarded as significant at a two-tailed p-value of 0.05. All calculations were performed using the glm function and the prop.test of the R software [67].

This work was supported by the “Fondazione Brunello e Federica Cucinelli” within the 2017–2020 research project “Chironomid population control at Lake Trasimeno: evaluation of biological control methods and new systems for the attraction and mechanical-light capture”. 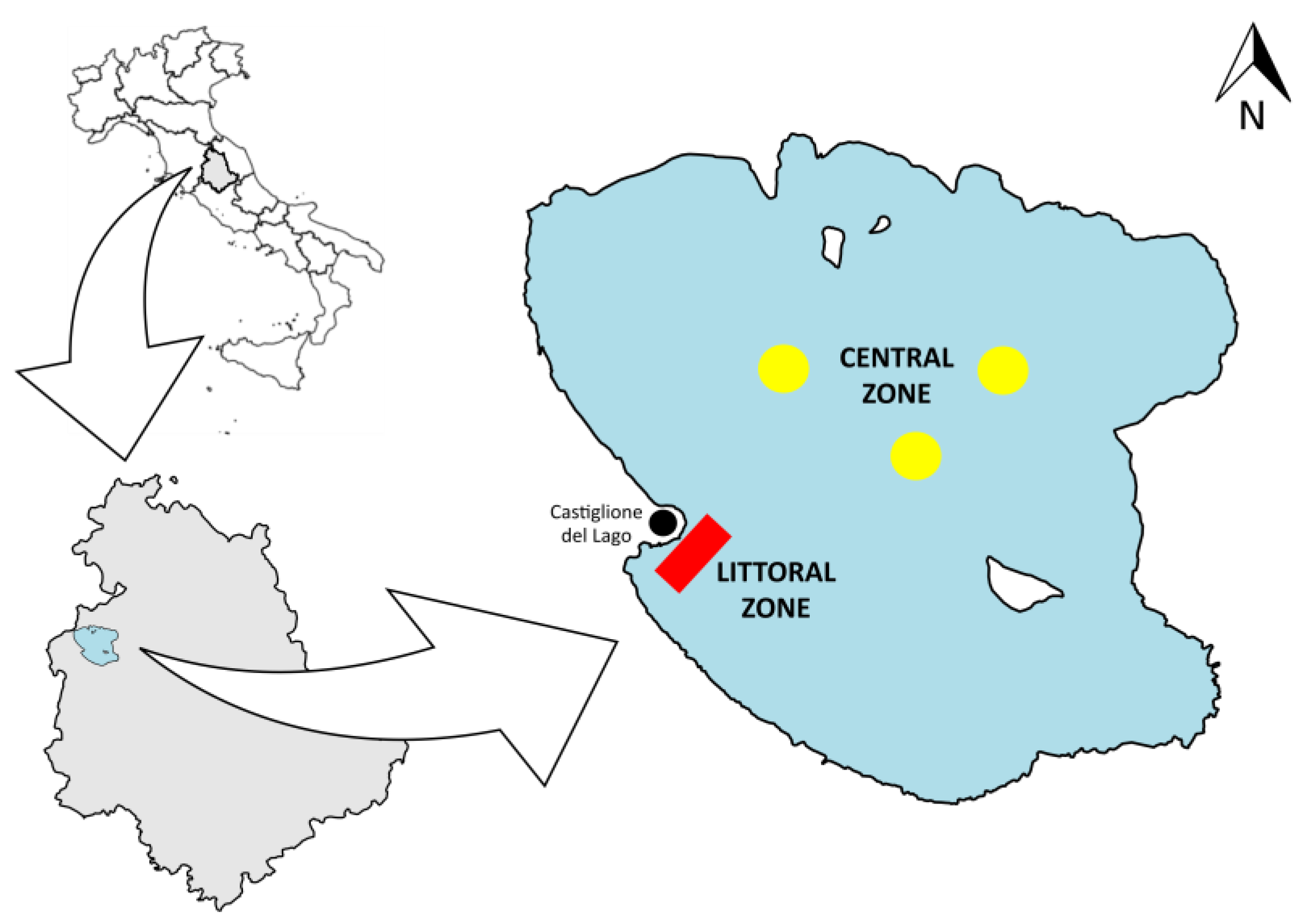 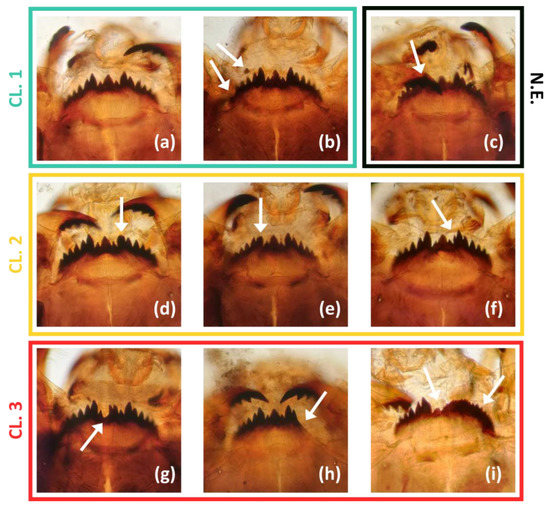 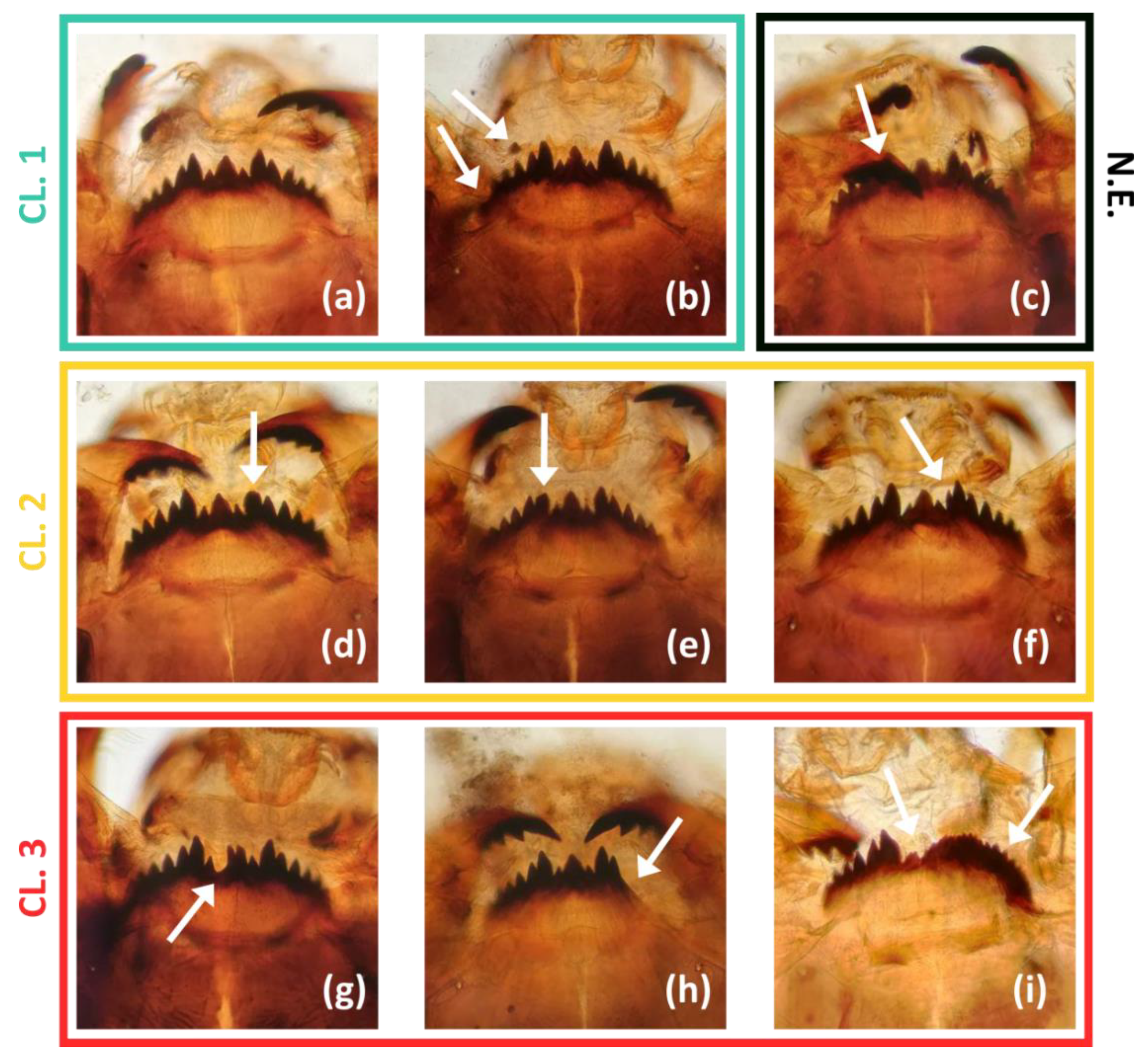 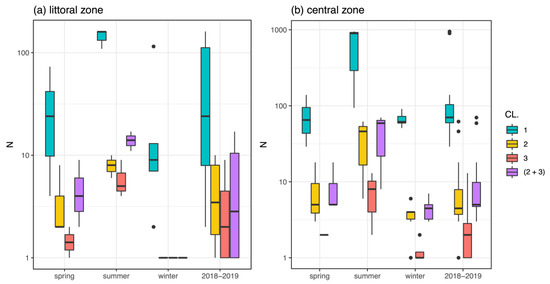 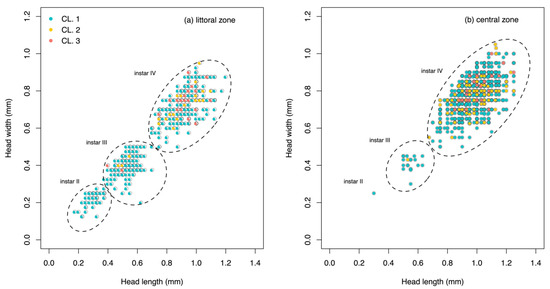