Farmers’ Attitudes to the Pricing of Natural Resources for Sustainability: GAP-Şanlıurfa Sampling of Turkey
Next Article in Special Issue

Hydrogeological and Climatological Risks Perception in a Multi-Hazard Environment: The Case of Greece
Previous Article in Special Issue

Development of Threshold Levels and a Climate-Sensitivity Model of the Hydrological Regime of the High-Altitude Catchment of the Western Himalayas, Pakistan

In this study, the performance of 33 Coupled Model Intercomparison Project 5 (CMIP5) global climate models (GCMs) in simulating precipitation over the Tibetan Plateau (TP) was assessed using data from 1961 to 2005 by an improved score-based method, which adopts multiple criteria to achieve a comprehensive evaluation. The future precipitation change was also estimated based on the Delta method by selecting the submultiple model ensemble (SMME) in the near-term (2006–2050) and far future (2051–2095) periods under Representative Concentration Pathways (RCP) scenarios RCP4.5 and RCP8.5. The results showed that most GCMs can reasonably simulate the precipitation pattern of an annual cycle; however, all GCMs overestimated the precipitation over TP, especially in spring and summer. The GCMs generally provide good simulations of the temporal characteristics of precipitation, while they did not perform as well in reproducing its spatial distributions. Different assessment criteria lead to inconsistent results; however, the improved rank score method, which adopts multiple criteria, provided a robust assessment of GCMs performance. The future annual precipitation was projected to increase by ~6% in the near-term with respect to the period 1961–2005, whereas increases of 12.3% and 16.7% are expected in the far future under RCP4.5 and RCP8.5 scenarios, respectively. Similar spatial distributions of future precipitation changes can be seen in the near-term and far future periods under the two scenarios, and indicate that the most predominant increases occurred in the north of TP. The results of this study are expected to provide valuable information on climate change, and for water resources and agricultural management in TP. View Full-Text
Keywords: GCMs; rank score; multiple criteria; projection; Tibetan Plateau GCMs; rank score; multiple criteria; projection; Tibetan Plateau
►▼ Show Figures 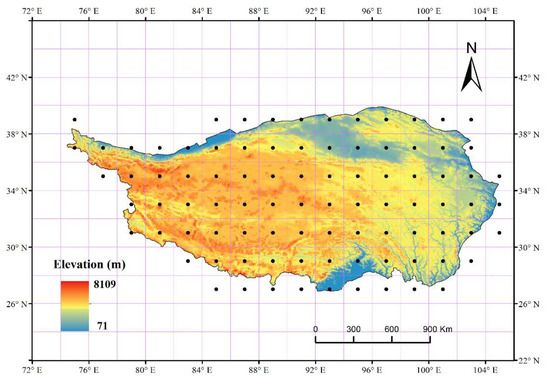