Using Distributed Temperature Sensing (DTS) for Locating and Characterising Infiltration and Inflow into Foul Sewers before, during and after Snowmelt Period
Next Article in Special Issue

Legionella pneumophila as a Health Hazard to Miners: A Pilot Study of Water Quality and QMRA
Previous Article in Special Issue

Wildfires in Grasslands and Shrublands: A Review of Impacts on Vegetation, Soil, Hydrology, and Geomorphology

The economic evaluation of a land parcel is mainly based on the local economy, as well as on the topography, distance to the main streets, distance to the river, and presence of irrigation. Spatial variability of soil features and functionalities are often left behind during economic land evaluation, probably due to a scarce awareness of soil function’s economic value. The paper shows an approach for economic land evaluation of irrigated croplands in the Po River plain (Northern Italy), based on spatial variability of soil functions, namely biomass production and carbon sequestration, as well as taking into account the river flood risk. The soil spatial variability was mapped using proximal sensing technology and few calibration points (one every 5 hectares). Biomass production of the main crops of the area, namely maize, soybean, and sorghum, was monitored and mapped for three years (2016, 2017, and 2018) using precision agriculture technologies. The results showed that the available water capacity (AWC) reached the highest correlation with biomass production, additionally, soil texture and cation exchange capacity were significantly correlated. Economic evaluation of the land parcels was computed considering the mean land market value of the area, the site-specific deviations due to the spatial variability of the biomass production by capitalization rate, and carbon sequestration soil functions, applying a natural capital approach by the mean annual value of the carbon market. This site-specific methodology could be applied to many other arable lands. View Full-Text
Keywords: proximal soil sensing; water retention; yield mapping; precision agriculture; economic valuations proximal soil sensing; water retention; yield mapping; precision agriculture; economic valuations
►▼ Show Figures 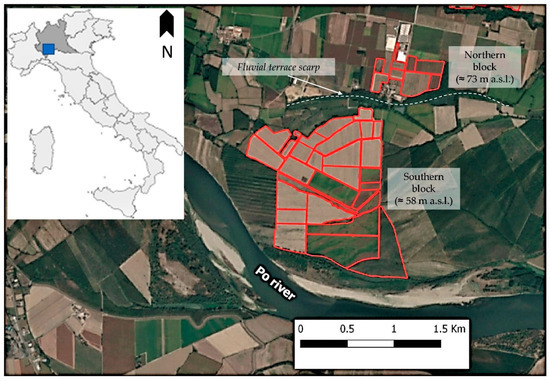