The Influence of Riparian Corridor Land Use on the Pesquería River’s Macroinvertebrate Community (N.E. Mexico)
Previous Article in Journal

Aquatic macroinvertebrates are frequently used to evaluate river system conditions and restoration project performance. A better understanding of macroinvertebrate community responses to multiple stressors is a primary challenge for river science. In this paper, macroinvertebrate responses to hydrological and water quality variability were studied in the regulated Oglio River (northern Italy). We hypothesized that in regulated rivers the hydrological, rather than the physico-chemical conditions, would affect macroinvertebrate communities and biomonitoring tools (taxonomic metrics and functional indices). Repeated sampling (six times a year) was performed at four sites downstream of four dams in a 30 km river stretch during 2014 and 2015. Data were analysed using a linear mixed effect framework, to take into account random variation due to site and sampling date, and with multivariate analysis to track changes in community structure. A total of 69 families and 134,693 organisms were identified. The investigated metrics were mainly affected by the coefficient of variation of discharge, minimum discharge, ammonium, and temperature. The short-term dynamics of hydrological and physico-chemical variables were generally less important than the overall random effects as drivers of macroinvertebrate-based metrics. However, the relevance of a random effect (site, time, their interaction) differed depending on the biological metrics analysed. Understanding potential differences in response to short term and short stretch conditions would benefit biomonitoring and restoration procedures in both regulated and natural rivers. View Full-Text
Keywords: bioindicators; taxonomic metrics; functional indices; regulated flows; hydrology; mixed effect models bioindicators; taxonomic metrics; functional indices; regulated flows; hydrology; mixed effect models
►▼ Show Figures 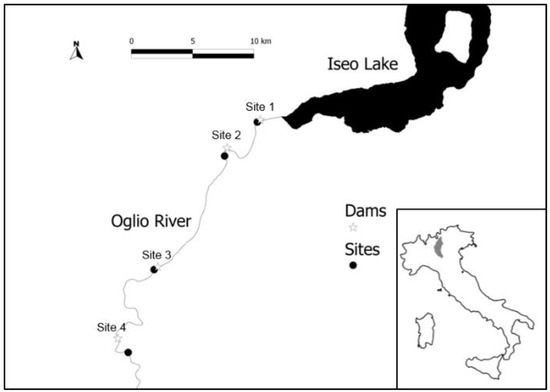