Landslides are the most frequent phenomenon in the northern part of Iran, which cause considerable financial and life damages every year. One of the most widely used approaches to reduce these damages is preparing a landslide susceptibility map (LSM) using suitable methods and selecting the proper conditioning factors. The current study is aimed at comparing four bivariate models, namely the frequency ratio (FR), Shannon entropy (SE), weights of evidence (WoE), and evidential belief function (EBF), for a LSM of Klijanrestagh Watershed, Iran. Firstly, 109 locations of landslides were obtained from field surveys and interpretation of aerial photographs. Then, the locations were categorized into two groups of 70% (74 locations) and 30% (35 locations), randomly, for modeling and validation processes, respectively. Then, 10 conditioning factors of slope aspect, curvature, elevation, distance from fault, lithology, normalized difference vegetation index (NDVI), distance from the river, distance from the road, the slope angle, and land use were determined to construct the spatial database. From the results of multicollinearity, it was concluded that no collinearity existed between the 10 considered conditioning factors in the occurrence of landslides. The receiver operating characteristic (ROC) curve and the area under the curve (AUC) were used for validation of the four achieved LSMs. The AUC results introduced the success rates of 0.8, 0.86, 0.84, and 0.85 for EBF, WoE, SE, and FR, respectively. Also, they indicated that the rates of prediction were 0.84, 0.83, 0.82, and 0.79 for WoE, FR, SE, and EBF, respectively. Therefore, the WoE model, having the highest AUC, was the most accurate method among the four implemented methods in identifying the regions at risk of future landslides in the study area. The outcomes of this research are useful and essential for the government, planners, decision makers, researchers, and general land-use planners in the study area. View Full-Text
Keywords: landslide; bivariate models; ROC; GIS; Kelijanrestagh; molticolinirity landslide; bivariate models; ROC; GIS; Kelijanrestagh; molticolinirity
►▼ Show Figures 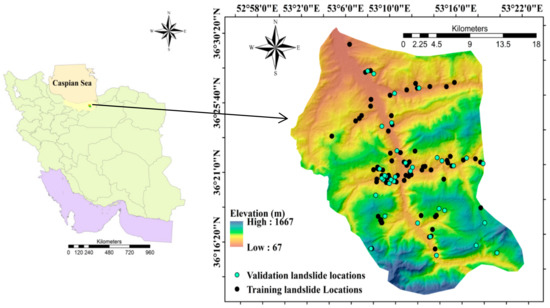