The subtropics within the monsoonal range are distinguished by intensive human activity, which affects stream water chemistry. This paper aims to determine spatio-temporal variations and flowpaths of stream water chemical elements in a long-term anthropogenically-modified landscape, as well as to verify whether the water chemistry of a subtropical elevated shield has distinct features compared to other headwater areas in the tropics. It was hypothesized that small catchments with homogenous environmental conditions could assist in investigating the changes in ions and trace metals in various populations and land uses. Numerous physico-chemical parameters were measured, including temperature, pH, electrical conductivity (EC), dissolved organic carbon (DOC), major ions, and trace metals. Chemical element concentrations were found to be low, with a total dissolved load (TDS) below 52 mg L−1. Statistical tests indicated an increase with significant differences in the chemical element concentration between sites and seasons along with increases of anthropogenic impact. Human influence was clearly visible in the case of cations (Ca2+, K+, Mg2+, Na+) and anions (Cl−, HCO3−, NO3−, SO42−), compared to trace metals. The order of most abundant metals Fe > Zn > Al > Sr was the same in springs and streams, regardless of population density, land use, and season. Principal component analysis (PCA) demonstrated that major ion concentrations in stream water followed the pattern forest < cultivated land < grassland < built-up area. Surface water chemistry of the subtropical elevated shield has mixed features of tropical and temperate zones. Low concentrations of chemical elements; small seasonal differences in headwater streams; and increased concentrations of NO3−, SO42−, DOC, and Zn in the wet monsoon season are similar to those observed in the tropics. The role of long-term cultivation without chemical fertilizers in ions supply to streams is less than in other headwater areas of the tropical zone. Strong control of water chemistry in densely populated built-up areas is analogous to both tropical and temperate regions. Population density or a built-up area may be used as a proxy for the reconstruction or prediction of the anthropogenic impact on stream water chemistry in similar subtropical elevated shields. View Full-Text
Keywords: anthropogenic impact; subtropics; small catchment; land use; population anthropogenic impact; subtropics; small catchment; land use; population
►▼ Show Figures 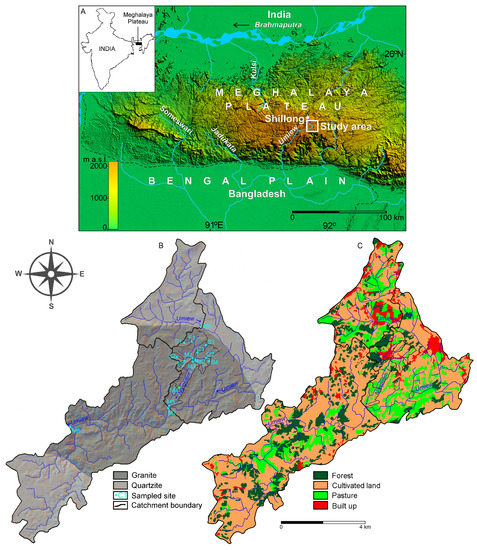