The control of fouling and scaling on heat and mass transfer surfaces is of major importance in processes as superficial water treatments, since it also improves the efficiency of the whole process from an energy saving point of view. The aim of the paper is to present the experimental results obtained in the inhibition of the fouling and scaling by calcium ions on an ultrafiltration membrane surface, by using citric acid as an additive. The last is an environmentally friendly additive−a so-called “green additive”, which may represent a reliable alternative to phosphorous and nitrogen based compounds typically used as inhibitors, since it has the characteristics of being non-toxic, non-bio accumulating, and biodegradable. The experimental plant is made of a tangential flow system on a lab scale equipped with a flat sheet ultrafiltration polymeric membrane, whose cut-off is 650 nm. In the first series of experiments, the effect of water hardness and its fouling effect due to calcium ions on membrane permeability has been measured in the range of potable waters. Then, the scaling effect of high calcium concentration in solution (supersaturated conditions) has been quantified by measuring the increase in weight of the membrane, with and without the addition of citric acid as an additive; moreover, the retarding effect of citric acid has been evaluated through the measurement of the induction times for the nucleation of calcium sulfate dihydrate (used as model scalant for fouling). Experiments have been carried out at two different supersaturation ratios (S = 2.25–2.60), at room temperature, in the absence of any additive, and with a citric acid concentration varying in the range 0.01 to 0.50 g/L. Experimental results have shown that the addition of citric acid in solution delays the induction times for gypsum crystals nucleation; moreover, it mitigates the phenomenon of membrane fouling and reduces the pressure drops by allowing an acceptable permeate flow for a longer duration. View Full-Text
Keywords: calcium sulfate dihydrate; gypsum; membrane; fouling; water reuse calcium sulfate dihydrate; gypsum; membrane; fouling; water reuse
►▼ Show Figures 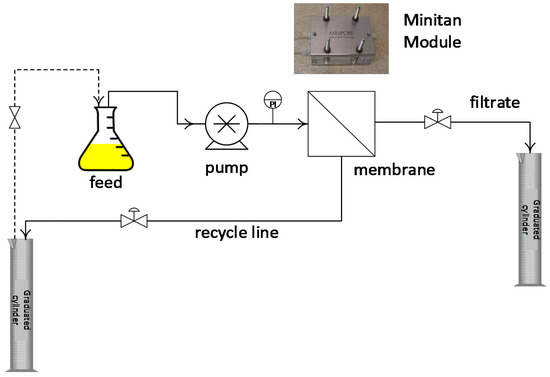