Water availability and quality in Mediterranean environments are largely related to the spatial organisation of land uses in mountain areas, where most water resources are generated. However, there is scant data available on the potential effects of land use changes on surface water chemistry in the Mediterranean mountain region. In order to address this gap in the research, this study investigates the effects of various mountain Mediterranean land covers/land uses on runoff water yielded and water chemistry (solute concentrations and loads) using data from the Aísa Valley Experimental Station (Central Pyrenees) for a long-term period (1991–2011). Nine land covers have been reproduced in closed plots, including dense shrub cover, grazing meadows, cereal, fallow land, abandoned field, shifting agriculture (active and abandoned) and 2 burned plots (one burned in 1991 and the second one burned twice in 1993 and 2001). Results show that all solute concentrations differed among land uses, with agricultural activity producing significantly higher solute loads and concentrations than the other types. Two groups have been identified: (i) the lowest solute concentrations and the smallest quantities of solute loads are recorded in the dense shrub cover, the plot burned once (at present well colonized with shrubs), meadows and abandoned field plots; (ii) the plot burned twice registered moderate values and the highest solute concentrations and loads are found in cereal, fallow land and shifting agriculture plots. Water chemistry is clearly dominated by Ca2+ and HCO3− concentrations, whereas other solutes are exported in very low quantities due to the poor nutrient content of the soil. These results complete the information published previously on soil erosion under different land uses in this experimental station and help to explain the evolution of land cover as a consequence of shifting agriculture, cereal farming on steep slopes and the use of recurrent fires to favour seasonal grazing. They also suggest that promoting the development of grazing and cutting meadows is a good strategy to reduce not only soil erosion but also the loss of nutrients. View Full-Text
Keywords: solutes; land uses; soil erosion; water quality; Central Pyrenees solutes; land uses; soil erosion; water quality; Central Pyrenees
►▼ Show Figures 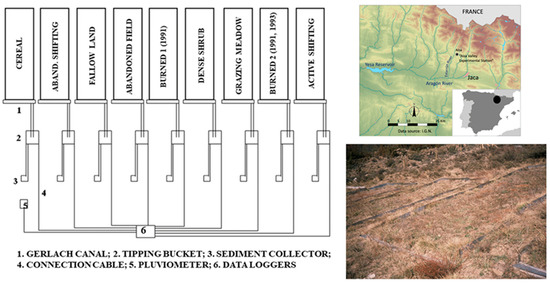