The use of global and regional climate models has been increasing in the past few decades, in order to analyze the future of natural resources and the socio-economic aspects of climate change. However, these climate model outputs can be quite biased, which makes it challenging to use them directly for analysis purpose. Therefore, a tool named Climate Data Bias Corrector was developed to correct the bias in climatic projections of historical and future periods for three primary climatic variables—rainfall, temperature (maximum and minimum), and solar radiation. It uses the quantile mapping approach, known for its efficiency and low computational cost for bias correction. Its Graphical User Interface (GUI) was made to be feasible to take input and give output in commonly used file formats—comma and tab delimited file formats. It also generates month-wise cumulative density function (CDF) plot of a random station/grid to allow the user to investigate the effectiveness of correction statistically. The tool was verified with a case study on several agro-ecological zones of India and found to be efficient. View Full-Text
Keywords: bias correction; quantile mapping; agro-ecological zones; climate change bias correction; quantile mapping; agro-ecological zones; climate change
►▼ Show Figures 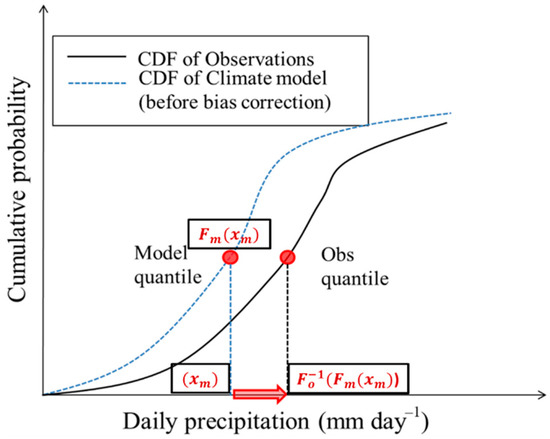