A Revised Method of Surface Water Quality Evaluation Based on Background Values and Its Application to Samples Collected in Heilongjiang Province, China

Understanding the snow accumulation and melting process is of great significance for the assessment and regulation of water resources and the prevention of meltwater flooding, especially for the semiarid region in the Manas River Basin. However, the lack of long snow measurement time series in this semiarid region prevents a full understanding of the detailed local-scale snow ablation process. Additionally, the modeling of snow accumulation and melting is challenging due to parameter uncertainty. In this study, the snow ablation process in the Manas River Basin was quantitatively explored with long time-series of 3-h measurements of snow depth, snow density and snow water equivalent (SWE) at the Wulanwusu (WLWS), Hanqiazi (HQZ), and Baiyanggou (BYG) sites. This study explored the ability of the Utah energy balance (UEB) snow accumulation and melt model to simulate SWE, energy flux and water loss in the study area. Furthermore, the uncertainty in the ground surface aerodynamic roughness index zos in the UEB model was also analyzed. The results showed that: (1) noticeable variations in snow depth, SWE and snow density occurred on seasonal and interannual time scales, and variations in melting time and melting ratios occurred on short time scales; (2) a rapid decrease in snow depth did not influence the variations in SWE, and snow melting occurred during all time periods, even winter, which is a typical characteristic of snow accumulation in arid environments; (3) the UEB model accurately simulated the snow ablation processes, including SWE, snow surface temperature, and energy flux, at WLWS, HQZ, and BYG sites; (4) the lowest contribution of net radiation to melting occurred in the piedmont clinoplain, followed by the mountain desert grassland belt and mountain forest belt, whereas the contributions of net turbulence exhibited the opposite pattern; (5) the optimal zos in the UEB model was experimentally determined to be 0.01 m, and the UEB model-simulated SWE based on this value was the most consistent with the measured SWE; and (6) the results may provide theoretical and data foundations for research on the snow accumulation process at the watershed scale. View Full-Text
Keywords: Manas River Basin; measurements; local scale; energy balance; snow ablation processes Manas River Basin; measurements; local scale; energy balance; snow ablation processes
►▼ Show Figures 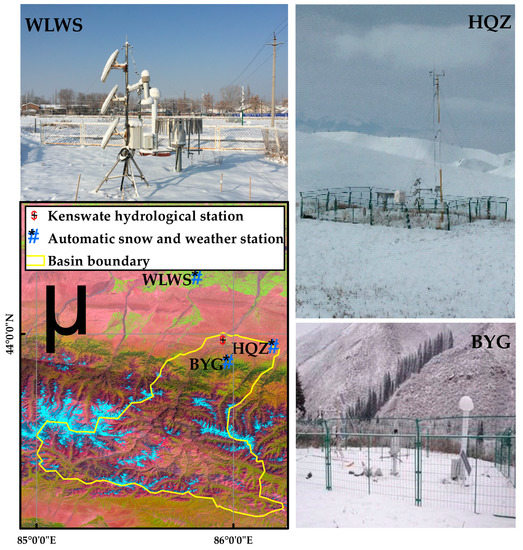